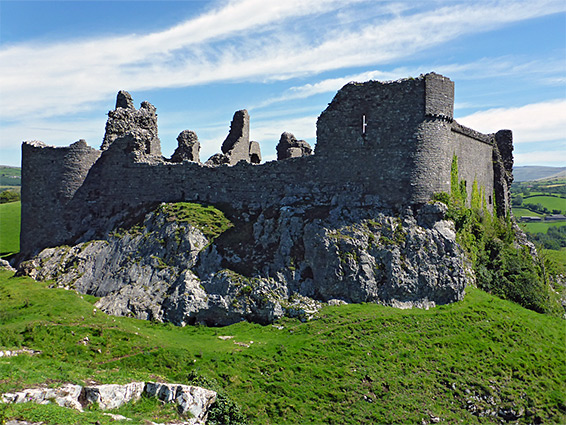 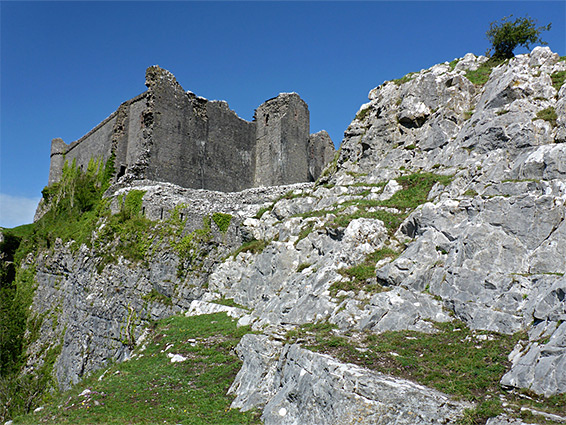 Perched majestically on an isolated, cliff-lined limestone hill near the west edge of Brecon Beacons National Park, Carreg Cennen Castle has perhaps the most spectacular location of the hundreds of medieval fortifications in Wales. Despite being ruined and largely unoccupied since 1462, after partial destruction led by Yorkists during the Wars of the Roses, the walls are still substantial, with various intact rooms, passageways and staircases. Views from the perimeter extend across many miles of the Carmarthenshire uplands, and the castle is particularly impressive to the south where its walls rise up from vertical cliffs of 200 feet.

This commanding position was an obvious location for a castle, and the first structure on the site was probably built in the 12th century, though discovery of Roman coins and several prehistoric skeletons just below the hill suggest that the site has been occupied for many centuries previously. The main building phase occurred at the end of 13th century, so the castle was in use for only around 200 years yet its remote location and sturdy construction have enabled the castle to survive in a good state of preservation.

The castle is privately owned, as it has been since late medieval times, though is managed by Cadw. Visitors walk uphill for a third of a mile to the entrance, on the east side, the one place where the surrounding slopes are not excessively steep, and reach the interior by a walkway above several deep ditches, once part of the defences. Part of the exterior can also to be explored, by walking across the grassy slopes to the north. 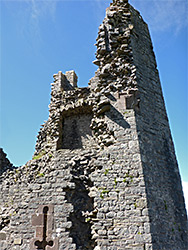 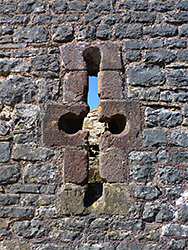 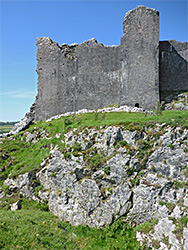 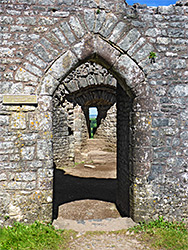 Most of the rocks in the western parts of the Brecon Beacons are Old Red Sandstone, generally resulting in rounded, grass-covered hills without any great cliffs, but the younger Carboniferous limestone (Dowlais Formation) is exposed in some locations, by faulting, including the castle site, at the west end of a narrow ridge overlooking the valley of the Afon Cennen, to the south - one mile from the village of Trapp and 5 miles from Llandeilo on the River Towy. The ruin, which is well signposted, is reached by narrow lanes and served by a relatively large parking area, in front of Tir-y-Castell Farm, run as a business together with the castle - the site also has a cafe and giftshop, and visitors may walk around the farmyard and inspect various animals which include horses, Longhorn cattle and several breeds of sheep. 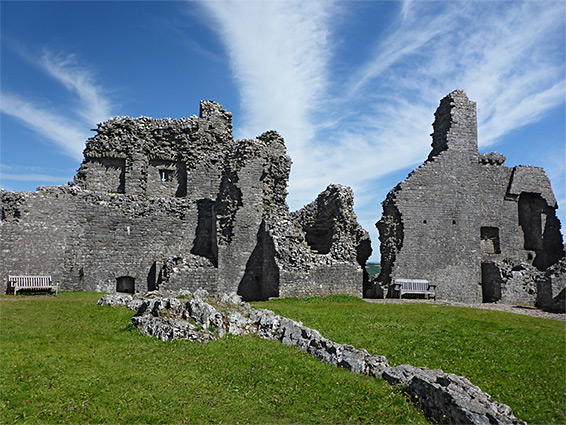 Rhys ap Gruffydd, ruler of Deheubarth (died 1197) is thought to have built the first stone castle on the hill above the River Cennen, and his descendants resided here for around a hundred years until the site was captured by Edward I in 1277, after which it remained under English control. The original castle was soon replaced with the much more imposing structure seen today, overseen by John Giffard (died 1299) and his son John. Ownership changed several times over the next hundred years, until 1399 when it became Crown Property, passing to Henry IV on his accession. The castle was attached in 1403 by forces led by Owain Glyndŵr, suffering significant damage, but was not captured, and after repairs continued to be occupied by the Lancastrians until 1461 when is was seized by the Yorkists who deliberately destroyed parts of the structure to prevent any future use in conflicts. 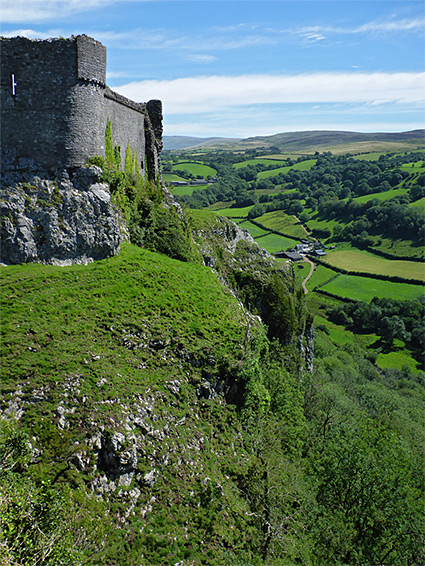 From the farmhouse, a track climbs to the base of the steep slope below the north side of the castle, bends to the east, past a second entry booth and finally cuts back west, ascending further across the limestone slopes to the ruined gateway at the entrance of the outer ward, an approximately square-shaped enclosure, the southwest corner of which incorporates the main structure, the inner ward. The outer ward is still clearly defined, by low walls, and it contains several rocky outcrops, one modified for use as a limekiln, plus a deep, rock-cut ditch. To the south the land falls away vertically, the cliffs extending a little way both west and east, while on the opposite side the slopes are considerably more gentle, though still affording good natural protection. Once into the outer ward there are no other routes outside, though the surroundings can be reached by an unofficial path that traverses the slopes on the north side leading to a series of limestone peaks to the west, providing excellent viewpoints of the castle. The limestone outcrops are home to a range of calcareous wildflower species. 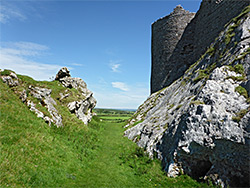 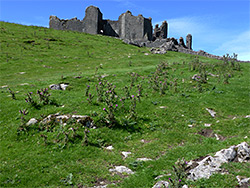 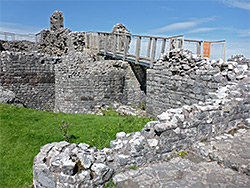 Entry into the inner ward was through a narrow passageway incorporating two right-angle bends, and in three places traversing rock-cut ditches via drawbridges, enabling a quick blockade in case of attack. The ditches, still deep, are now bridged by elevated walkways. The final section of the corridor leads to the three-storey gatehouse, on the north side of the castle, flanked by two buttressed towers, with a third tower just inside, acting as a final line of defence should the gatehouse be breached. Two further substantial (octagonal) towers are positioned at the northwest and northeast corners; the other two corners required less protection owing the natural cliff below. The main living quarters, including kitchen, great hall, chapel and 'king's room' complete with traceried windows are inside the eastern wall, while another structure of uncertain purpose is situated to the south, above which the outer curtain wall still survives to full height, topped by the original wall walk. The west curtain wall is the least complete and seems to have no structures adjoining it. Other features of the inner ward are baking ovens, two cisterns for holding water and, most unusually, a natural cave, accessed via a flight of stone steps down from the southeast corner tower and then a long passageway. The cave originally had a natural opening towards the base of the cliff but this was blocked up to prevent enemy access. The cave is vaulted, partially lined by stone and has in one place a series of small openings, probably intended for pigeons who may have been bred as a food source. A natural spring rises towards the lower end of the tunnel. 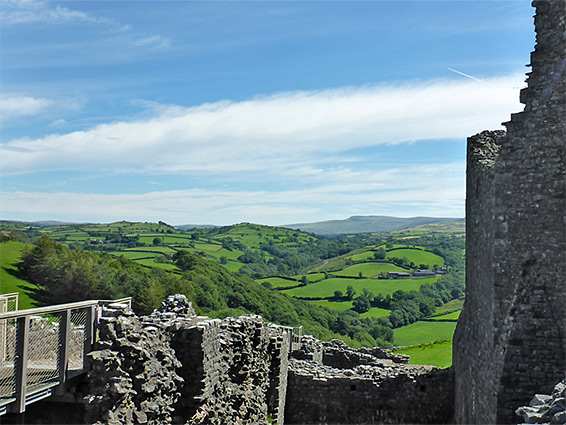