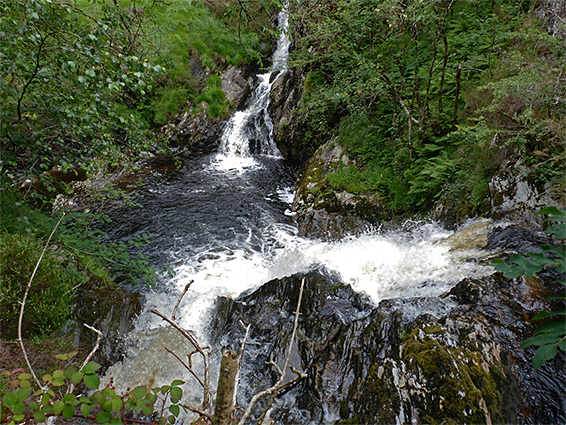 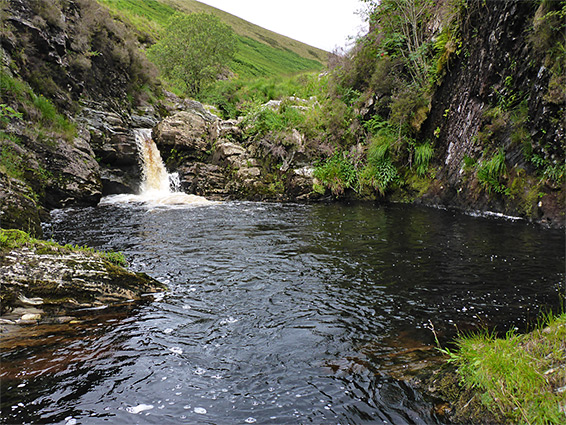 Rocky, mile-long gorge in the Cambrian Mountains, largely inaccessible apart from around the upper end, where features include a narrow, confined cascade and a deep, circular pool (Pwll Uffern)

The mile-long gorge of the Pysgotwr Fawr river is one of the deepest and rockiest of the many narrow valleys around the edges of the Cambrian Mountains in central Wales. Steep slopes rise up to 600 feet above the river, which flows through a long series of cascades and cliff-lined pools, and seems completely impassable at water level for most of its length, though around its uppermost section, at the confluence with the Pysgotwr Fach tributary, the valley sides are much lower and the river is reachable, with care. Here are two photogenic features, a confined, elongated cascade and a waterfall above a deep, circular pool - Pwll Uffern, or Hell's Pool, one of several places with this name in the mountains.

The tributary and the river below the confluence form the county boundary between Carmarthenshire to the south and Ceredigion to the north. The southern slopes are all wooded, part of a conifer plantation, but the northern hills are still in their natural state, covered by short grass and bracken and crossed by a farm track that follows high above the gorge and the river confluence, which can then be reached by cross-country walking, a distance of about 3 miles from the closest parking area. Although dramatic, the confluence and the nearby cascades and pools are not easy to view properly and are definitely not a recognised hiking destination, though just the walk along the track is worthwhile, offering grand views of the valleys and the rolling moorland typical of this part of the country. 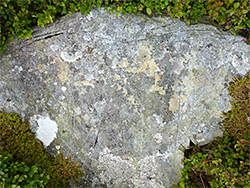 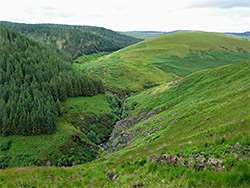 Hills to the west

Afon Pysgotwr Fawr is a short river, just 4 miles, meeting the Afon Doethie which in turn joins the larger Afon Tywi 1.5 miles further, in the middle of a wide valley, ten miles north of Llandovery. From the main road through the Tywi valley, a narrow side road with very few passing places crosses the river and follows the Doethie through a wooded ravine, passing to the north side via a second bridge before leaving the trees, curving around a little tributary stream then entering a farm and becoming private. A suitable parking place is at the edge of the woodland on a grassy bank beside the river, opposite a gate. 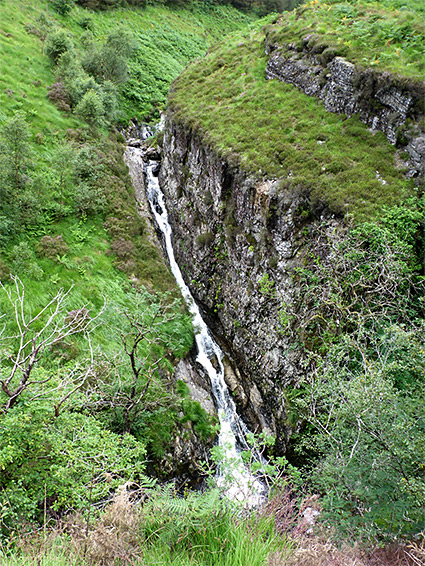 Cascade at the lower end of Afon Pysgotwr Fach

Track into the Hills

Once through the farm, the road, now unpaved, provides a walking route all the way across the hills above the gorge. The track stays level for a while, 50 feet above the river, past a path that follows the Afon Doethie northwards, then crosses the river on an old wooden bridge, leads through some trees and round an isolated house, Troed-rhiw-cymmer. The building sits opposite the lower end of the Pysgotwr Fawr gorge, and a faint path continues upstream a little way until the sides become too steep to continue. The track starts a steep climb up the side of the Afon Doethie valley, climbing 600 feet to the plateau between the two rivers, where it becomes quite straight for nearly a mile, with views only of the surrounding grassy moorland.

2.6 miles from the parking place, the track reaches the far side of the plateau, where the ground slopes steadily down towards the shallow upper end of the valley; it continues to another isolated farm (Bryn-ambor), close to the river. A suitable place to descend towards the confluence is beside an old quarry, shortly after the track bends northwards - heading southwest down grassy slopes, and reaching the river just before it starts to become cliff-bound, about a quarter of a mile above the confluence. Walking becomes harder in the vicinity of the river due to extensive patches of boggy soil and tussocky grass, and the steep terrain, but with some effort the Afon Pysgotwr Fawr can be followed down to the confluence; past several smaller pools to the waterfall feeding Pwll Uffern, then alongside more cascades to another large pool just below the junction; on the far side, the Afon Pysgotwr Fach is confined within a narrow, slot-like channel where water cascades down by about 100 feet. The main gorge soon deepens further and is impossible to follow so the only option is to climb back up the valley sides, either returning same way or taking a diagonal route due east across the slopes, and eventually rejoining the farm track in the middle of the moorland plateau. 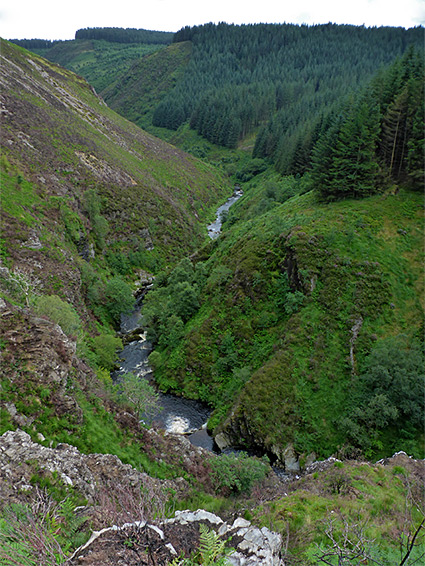