Foundations and one large wall fragment from an Augustinian priory established in 1133, subsequently transformed into a manor house

Management
English Heritage
Entry
Free
Location
Carpark along Priory Road, Southwick; PO17 6ED
Southwick Priory was an Augustinian institution, founded in 1133 by Henry I, and initially located within the Roman walls surrounding Portchester Castle, on the Hampshire coast. It consisted of a church and several auxiliary buildings, though survived at this site for only around ten years, before being moved, for reasons unknown, to a new location 2.5 miles north, on a flat, wooded ridge between two shallow valleys. Here it remained, in operation for nearly 400 years without major incident, never very large nor prosperous though becoming quite famous by the early 16th century, a noted destination for pilgrims to visit, and known then as Our Lady of Southwick.

The priory closed, like all others in the country, in 1538 during the Reformation. All buildings were acquired by one John White, servant of the Earl of Southampton, who soon demolished the conventual church and converted some of the outbuildings, including the prior's residence, into a mansion, Southwick Park. This endured until 1750 when most was destroyed by a fire; the dwelling was subsequently rebuilt just to the north, in the late Georgian style and this structure (Southwick House) still survives, surrounded by an estate of fields and woodland.

The only remnants of the converted mansion are one long wall and a few foundations. The wall incorporates red brick from the mansion but much is original, from the 12th century priory, including the doorway and several round columns. The ruin is managed by English Heritage, and accessed by a short path from Southwick village. 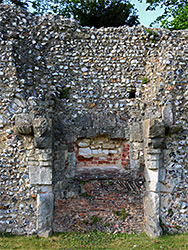 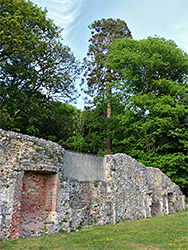 Trees above the ruin 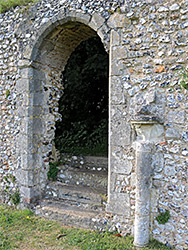 The ruins of Southwick Priory are approached via High Street then Priory Road, in Southwick, just north of the B2177, leaving vehicles in a car park at the end of a side street on the west side. Opposite the junction is a gate and English Heritage sign; a path from here runs through a strip of trees, rounds a pond then enters more woodland, including at least one giant redwood - part of The Wilderness, a wooded section of Southwick Park estate. The path approaches the ruin from the north, through a doorway into what was the mansion interior, now a field, bordering a golf course to the south. The wall is 70 feet long, partially two stories high, and its features include the doorway, a brick-lined alcove, a fireplace, a buttress and a smaller niche. There are several low foundations elsewhere in the field, but no trace of any other part of the priory, in particular the church, which lay to the southeast. 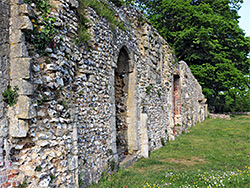 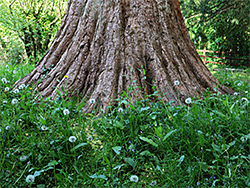 Dandelions below a redwood 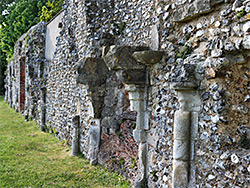