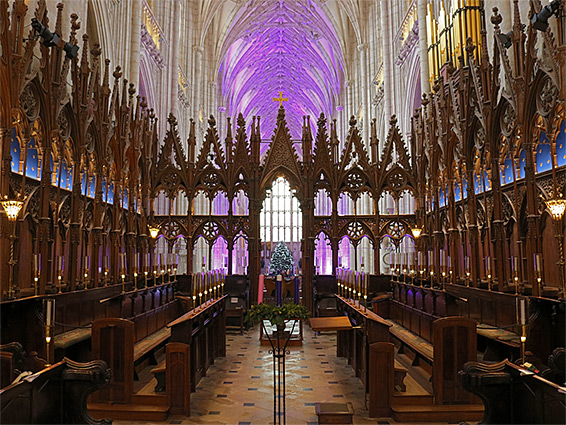 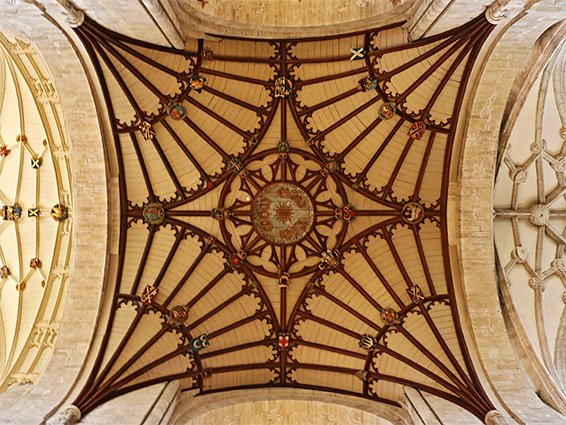 Spectacular, beautifully-decorated and historically significant cathedral, the longest in Europe; the oldest sections are from 1079. Design is a mix of Norman and Gothic

Management
Diocese of Winchester
Entry
£10 for adults (2022)
Location
The Close, at the centre of Winchester; SO23 9LS
Photo Tour (32 images)

Settlement at Winchester, beside the River Itchen in the middle of Hampshire spans several thousand years, from Iron Age peoples to the ancient tribe of the Belgae, then the Romans and the Anglo-Saxons; when the Normans arrived in 1066 the town contained three monasteries, several other churches and many hundreds of buildings, all protected within stone walls erected by the Romans in the third century.

William the Conqueror soon ordered the construction of a new cathedral, on land just south of two of the monasteries, the Old Minster (founded around 660) and the New Minster (901), and following various additions and remodelling this reached its final, current design in 1532. Winchester Cathedral is recognised now as one of the finest medieval cathedrals in Europe, and also the longest, 558 feet from the west front, through the nave, the choir and the presbytery to the lady chapel at the east end. The design is a mix of Norman and Perpendicular Gothic, and the building contains innumerable monuments and tombs, together with eleven chantry chapels. Six spiral staircases access the upper levels, and a huge Norman crypt underlies much of the structure.

The cathedral acted as the church for a monastery, dedicated to St Swithin (or Swithun), until the Reformation of 1539, whereupon most of its subsidiary buildings, including cloisters, refectory and chapter house were demolished; the church though has survived unchanged, the only subsequent damage being caused by Cromwellian soldiers in 1642, mainly smashing of stained glass windows, leaving the whole building essentially the same as it was in the late middle ages. 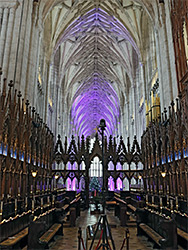 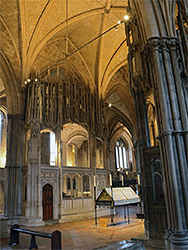 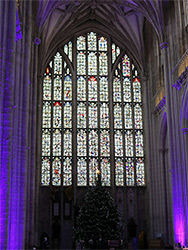 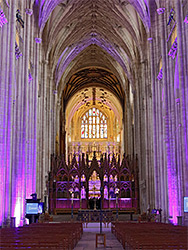 The first Norman Bishop of Winchester was Walkelin, an unspecified relative of William the Conqueror, and he took up residence in the Old Minster, the cathedral of which was founded in the seventh century then rebuilt and enlarged in the 970s; dedicated to St Swithin and staffed by an order of Benedictine monks. Construction of a new, much larger cathedral commenced in 1079 on a site just south of the Old Minster, starting with the east end, the choir and altar, this finished by 1093, allowing consecration of the building, immediately after which the Old Minster was swiftly demolished, along with the adjacent New Minster. A number of tombs of Anglo-Saxon kings were transferred from the Old Minister, and some can still be seen, though the identity of the occupants is unknown. Work on the new church proceeded westwards, to the crossing, below a central square tower, with north and south transepts, and finally the nave, though this stage was interrupted for a few years by collapse of the tower, resuming when it was repaired. All was done by the 1120s, at which time the building was already very large, nearly 500 feet in length, and very sturdily constructed. The early Norman architecture survives most notably in the north and south transept, virtually unchanged from the time of their construction. 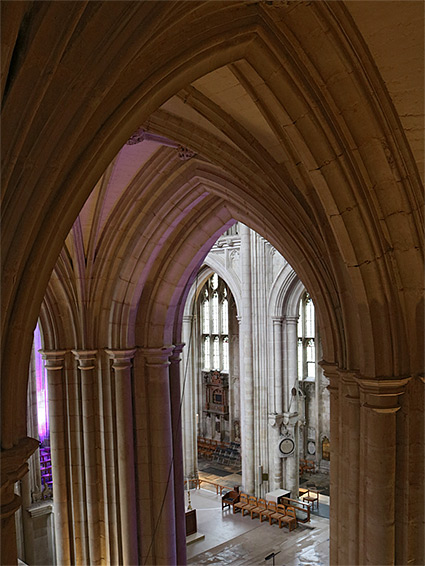 Array of arches; view from the south transept

Apart from remodelling of the east end of the cathedral - replacement of the original apse with a larger ceremonial area, the retrochoir, in the early 13th century - there were no major modifications to the cathedral for over 200 years, until 1346, when the nave and west front were remodelled, in the Perpendicular Gothic style, including a stone vaulted ceiling, replacing the original wooden roof, and a great west window - work which took over a century, completed around 1420. Similar updating was then carried out to the choir and retrochoir, also incorporating Perpendicular Gothic elements, and addition of a lady chapel plus several chantry chapels; this took nearly 80 years, complete in 1528, just 11 years before the Dissolution of the Monasteries. Later elements included an ornate choir screen (1638), a wooden vaulted ceiling underneath the tower, also in the mid-17th century, and a wooden screen in front of the choir, in 1875. The Civil War damage to the great west window was repaired after the local residents picked up all the broken pieces of medieval stained glass, but of necessity they were replaced as a mosaic since the original design was impossible to replicate. The cathedral was subject to cosmetic restorations in the early 19th century and then a major stabilisation project at the start of the 20th century to mitigate damage due to subsidence. Most of this work was underground but included addition of a row of flying buttresses along the south side of the nave. 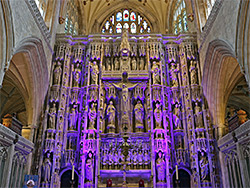 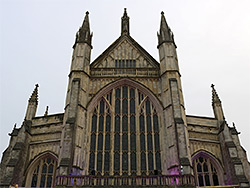 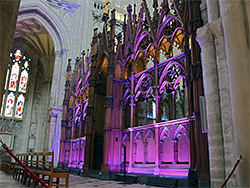 Entry to Winchester Cathedral for visitors is through a doorway at the northwest corner, a point just within the former Old Minster, the outline of which is traced by brickwork in the adjacent grounds. The door opens to the north aisle of the massive, eleven-bay nave, its original Norman columns encased by perpendicular Gothic cladding from the late 1300s. Beyond the nave is the crossing, beneath the tower, flanked by the north and south transepts, the east and west walls of which are lined by monuments and chantry chapels. The choir is positioned directly beneath the tower and contains original wooden stalls from the early 1300s, said to be the best preserved in Europe. Beyond the chancel is the presbytery, the retrochoir and finally the lady chapel, either side of which are two of the larger chantry chapels, dedicated to the Guardian Angels and Bishop Langton. Beyond the south wall of the south transept are two remnants of the former monastic outbuildings, largely demolished in 1539 - a slype (covered passageway) and part of the framework of the chapter house, including a short colonnade that once faced the cloisters, to the west, on the south side of the nave. 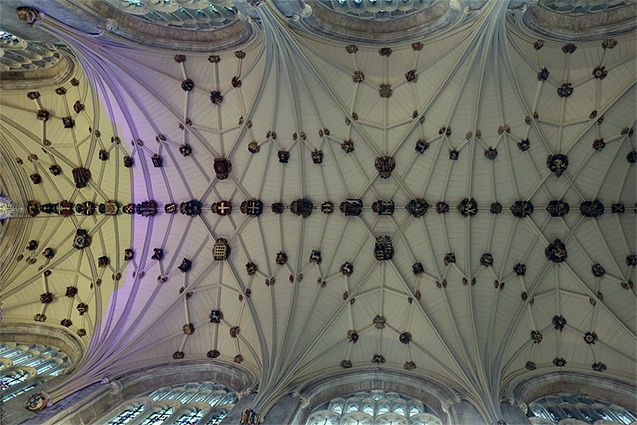