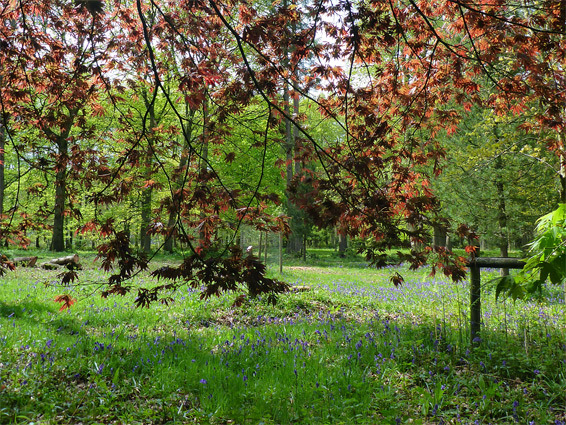 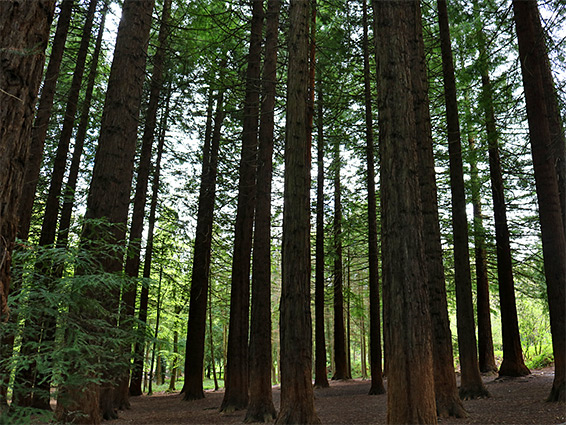 Semi-natural woodland, mainly oak, surrounding an arboretum containing over 1,200 specimen trees from all over the world. On hilly ground above the River Lugg

In undulating country seven miles north of Hereford, Queenswood County Park and Arboretum comprises 123 acres of woodland on the top and the southern slopes of Dinmore Hill, a prominent ridge of Old Red Sandstone, above the valley of the River Lugg. At the centre is an arboretum, established in 1953 as part of celebrations for the coronation of Queen Elizabeth II, and now containing over 1,200 specimens of trees from all over the world, while surrounding this is a sizeable area of original woodland, mainly oak - this is classed as semi-natural, having been coppiced and managed for timber over the previous centuries.

The woodland section is both a nature reserve, managed by Herefordshire Wildlife Trust, and a Site of Special Scientific Interest, part of the larger Dinmore Hill Woods SSSI notified for being on the largest blocks of deciduous woodland in the county, with soils ranging from acid to alkaline, wet to dry, and so resulting in a wide range of plants, with just a few rare species such as wood vetch, bird's nest orchid and greater butterfly orchid. Mammals that may be seen include dormice, polecats and yellow necked mice.

The local nature reserve section is colourful in late spring when bluebells are in bloom, and again in autumn, but the arboretum is the main attraction for most visitors, all year. Facilities are a cafe, play area and gift shop, and several hours could be spent walking the various paths and tracks.

The woods were for several centuries part of the estate of Hampton Court Castle, a fortified mansion a short distance east, beside the River Lugg, originally owned by the Lenthall and Coningsby families. 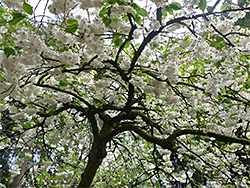 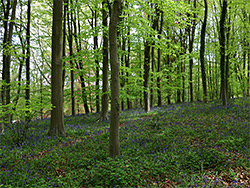 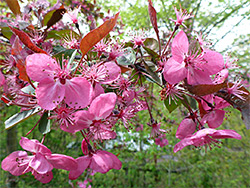 The A39 runs all along the side of the park, and a turning about halfway along Leeds to large, paid parking area. Free access is possible by leaving vehicles along a lesser, unnamed road on the west side, at the intersection with Buskwood Road, and walking eastwards along a short path, to the main parking place. The path crosses the edge of the North Wood one of the two components of the nature reserve - this extends over half mile, the land initially flat then becoming more sloping, to the west. In the other direction, beyond the arboretum, is the similarly-sized South Wood, originally named Queenswood in recognition of Queen Elizabeth I - prior to this all the trees hereabouts were Kingswood, after earlier monarchs. The ground here is steeper and crossed by fewer paths, so is not visited as much as the North Wood. 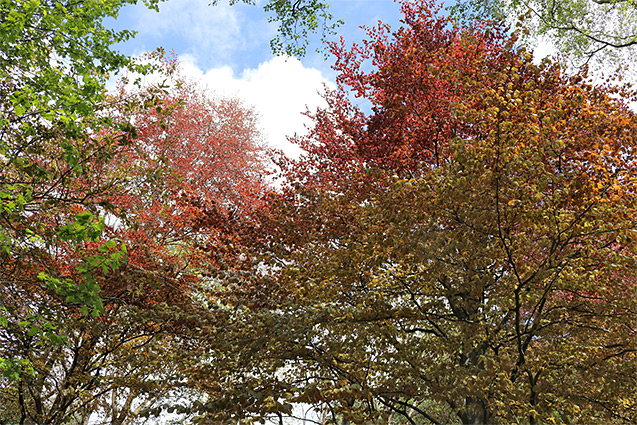 Varied colours of beech leaves, in the spring

The arboretum extends south and southwest from the parking area for about half a mile and is cross by various rides, some many centuries old. Features include Redwood Grove, a closely-spaced group of coastal California redwoods, Autumn Garden, containing Japanese maples and other trees that are particularly colourful at the end of summer, and Oak Avenue, a track between two lines of ancient oak trees. Near the south edge of the arboretum, on a hill just beyond an old quarry, is a viewpoint with bench, telescope and orientation plaque, looking down the Lugg valley towards Hereford. 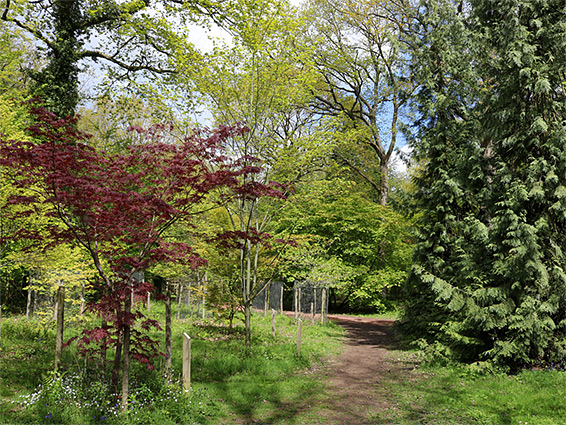