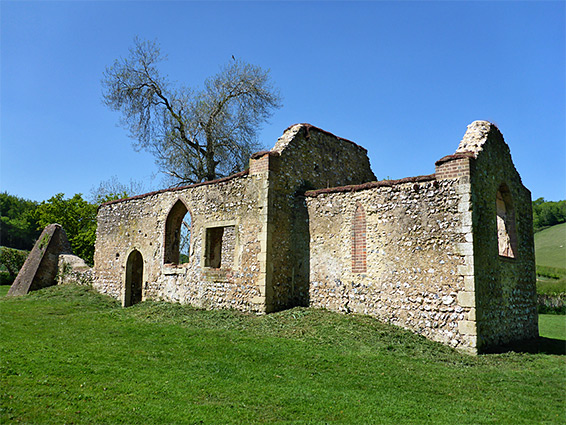 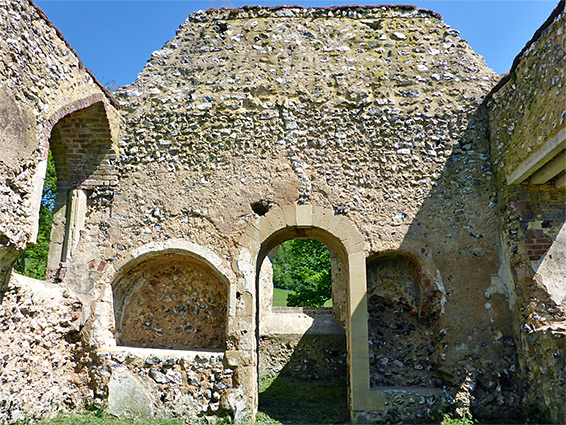 Crumbling ruins of a small Norman church, surrounded by fields, in a dry valley in the Chilterns; a scheduled ancient monument

Management
Bix & Assendon Parish
Location
Along a country lane off the A4130, 4 miles north of Henley-on-Thames; RG9 6BJ
In a remote dry valley in the Chilterns, 2.5 miles from Henley-on-Thames, stands the crumbling ruin of a Norman church, the only relic from a vanished village; the ancient settlement of Bix Brand, which is recorded in the Domesday Book of 1085, together with the neighbouring village of Bix Gibwyn. This is the Church of St James, a small building surrounded only by fields, with extensive woodland (part of Warburg Nature Reserve) a short distance north.

By the 1800s, almost all the parishioners had moved to Bix Gibwyn, the current village of Bix, and the old church was finally abandoned in 1875. In the decades since it has lost the roof and rear wall, and gradually became overgrown, but a recent restoration has removed the vegetation and stabilised the remaining ruins, which now have a crisp, clean appearance, and display a range of architectural styles, reflecting the different phases of construction, from early Norman walls to brick window linings from the 1700s.

The church is accessed by a narrow lane and can be viewed at any time. It is owned by the local parish though managed by English Heritage, who financed the recent restoration. An interpretive panel at the entrance gives much information about the local history. 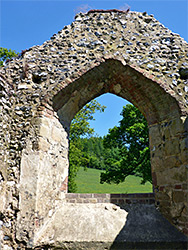 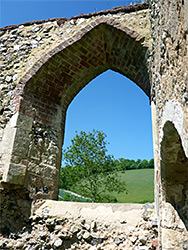 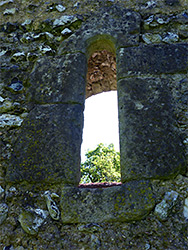 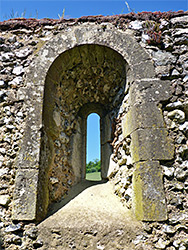 Bix Old Church stands in a grassy enclosure, formerly the graveyard, which is lined by trees, largely hiding the building from the approach road, a narrow (paved) lane from Bix, starting along the A4170 next to the current, replacement church of St James. The road continues uphill for 0.8 miles to the main entrance of Warburg Nature Reserve. The church has a simple two-room design, chancel and aisleless nave, with Romanesque architecture. Parts of the walls are constructed from knapped flint, arranged in the herringbone style familiar to the Anglo-Saxons, and were probably built in the early 12th century. Missing original features include the roof, the west wall of the nave and the small wooden belltower above, the south porch, and the keystone of the chancel arch (since replaced). The seven windows have two styles, narrow slits from the early Norman period and larger, arched openings from the 1300s. The two windows in the side walls of the chancel are bricked up. 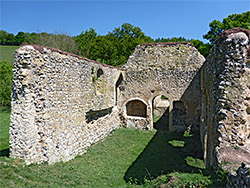 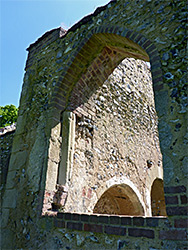 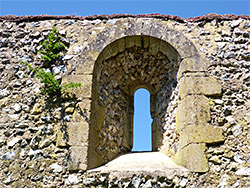 The name Bix, originally Byxe, is thought to derive from the box shrubs that grow in this area, and a settlement was established here in Saxon times, along an ancient north-south travel route across the Chilterns. Despite the small size of the two post-Norman villages (Bix Brand and Bix Gibwyn), both had their own church, each standing for several centuries, until the latter (St Michael's) became derelict in the 1600s. St James' Church had also become unstable by the 1700s, when two brick buttresses had to be installed to shore up the rear wall, though the structure continued to decay and was eventually deemed to be beyond repair, which led to its closure in 1874. Furnishings, the roof and some of the stonework were removed for use in the replacement church, and the remaining structure was abandoned and soon became overgrown with ivy. But following the restoration, (open air) church services are once more held here, several times each year. 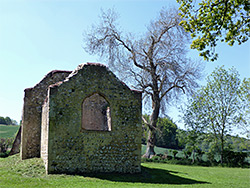 East end of the church 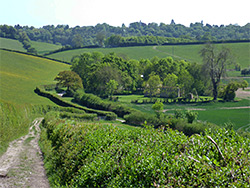 Track from the church 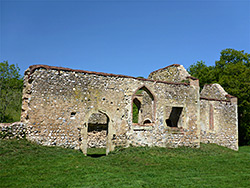