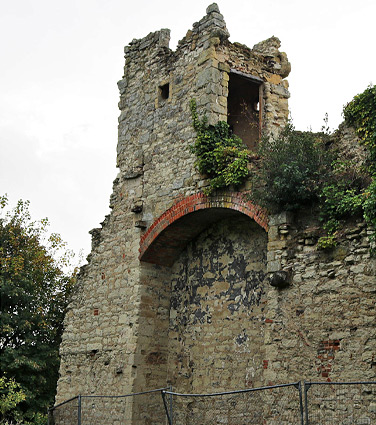 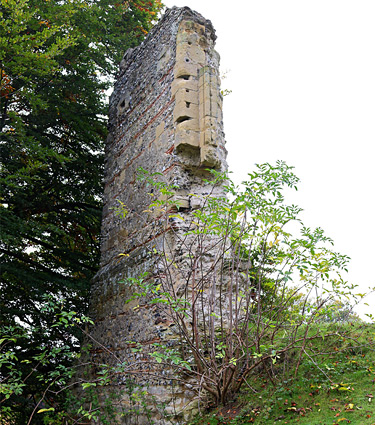 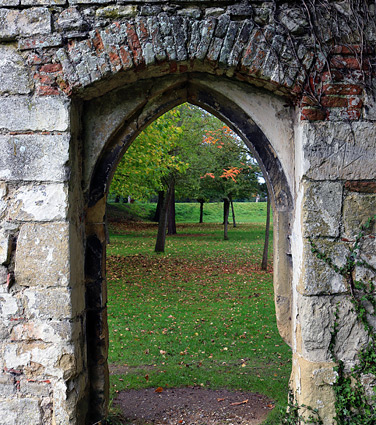 Fragmentary remains of a major medieval fortification, beside a ford across the River Thames; almost completely destroyed after the Civil War, leaving only a few short wall sections

Wallingford Castle was for several centuries a major medieval fortress, comparable to and contemporary with Windsor Castle, and even though it had become largely disused by the middle of the 16th century, it was still sufficiently sturdy to resist Parliamentary attacks during the English Civil War, when occupied by supporters of the King. This campaign precipitated an abrupt end to the castle, since shortly after the end of the war it was deliberately destroyed (slighted) to prevent any future use in conflicts. Unlike some similar castles, such as Donnington, Corfe, Goodrich and Montgomery, for which significant sections remained after their slighting, here the destruction was nearly complete, leaving only a few short sections of wall, though the earthworks are still clearly visible, and extensive.

The castle at Wallingford was built on the west bank of the River Thames, guarding a historic crossing point, and at its peak in the late 13th century consisted of a raised keep surrounded by the inner bailey, protected to the north, west and south by three successive, partially moated curtain walls, with other baileys in-between; to the east was only a single wall since the river just beyond acted as an effective barrier. Today most of the site is grassy parkland dotted with trees - Castle Gardens and Meadow, across which the fragmentary remains from the castle are spread over a relatively large area. 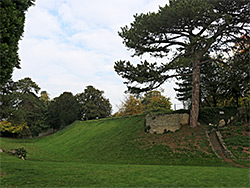 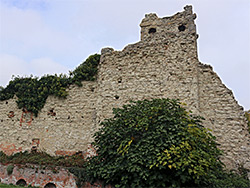 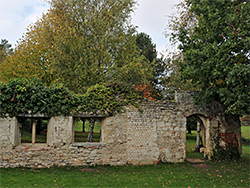 At the time of the 1066 invasion, Wallingford was an important Saxon town, guarding the river ford, and hence was a logical site for the Normans to fortify. A wooden keep atop a motte encircled by a timber fence was constructed here around 1071, by Norman nobleman Robert D'Oyly, who had married the daughter of the Saxon governor, Wigod. The central structure was rebuilt in stone in the 1130s, surrounded by a stone curtain wall, and saw its first major action shortly afterwards, during the civil war between the supporters of Stephen and Matilda, rival claimants to the English throne. The castle was reinforced during the reign of King John at the start of the 13th century, then again at intervals over the next hundred years, when it became a regular royal residence, but by the 14th century was mostly employed as a prison, up until the early 16th century when the place was largely disused, and various materials had been removed, to repair Windsor Castle. The castle was destroyed in 1652, six years after the siege during the Civil War, and the site is little changed since, although two buildings were erected within the central bailey, firstly a house around 1700, replaced in the 1830s by an ornate mansion that survived until 1972, when it was removed after becoming derelict. 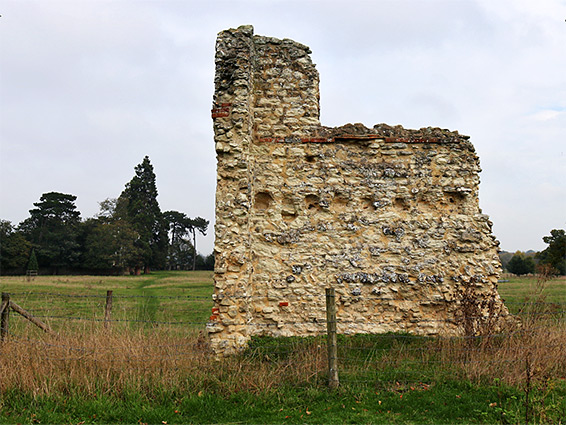 South Section of the Ruins

The closest parking to the site is along Castle Street just north of Wallingford town centre - entrance to the castle gardens is along a short side road (Bear Lane), which passes the tree-line graveyard of All Hallows Church, an ancient place of worship established here by the 13th century but also destroyed just after the Civil War, having been used as a gun emplacement by the Royalists. A gateway through a wall leads to the south edge of the Castle Gardens, formerly within the outer bailey - ahead is a ditch, once a moat, and then a slope rising to the middle bailey, site of the mansion that was removed in 1972. A little way east are two wall sections - part of the middle curtain wall and an inner section at right angles, which together formed two sides of the chapel of St Nicholas College, a religious order that was established by Robert D'Oyly. The inner wall, from the west side of the chapel, contains a neat, arched doorway and four rectangular windows (two of which are blocked), probably dating from the 15th century, while the larger outer wall to the south has a more elegant, three-light window and part of the square church tower, and is somewhat earlier, from the 14th century. 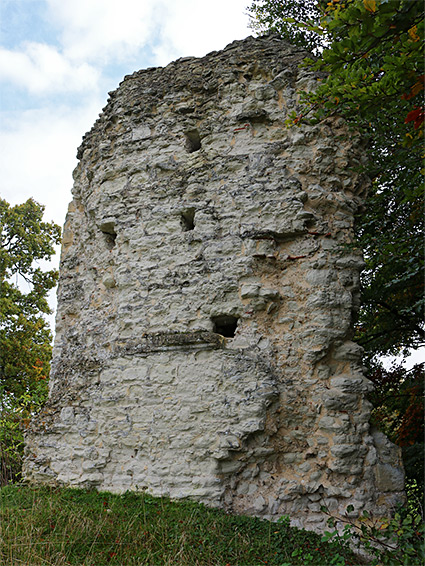 North Section of the Ruins

The southern section of castle site (Castle Gardens), containing the ditch, part of the middle bailey and the college ruin, is cut off from the main section (Castle Meadow) to the north by a sunken lane, crossed by a footbridge linking the two areas; paths from the bridge lead northwards across another ditch, the innermost moat, and over the extensive grassland beyond. To the east is a wooded knoll, the original motte from the 11th century, while to the north is one of two other surviving wall sections - a 15 foot portion of the innermost curtain wall including an inward facing right angle, seemingly the edge of a gateway. The other remnant is 300 feet southeast, a fragment of a sizeable tower known as the Queens Tower, incorporating a portion of the frame of an upper floor window, early 14th century in style. The tower was part of the eastern curtain wall, facing the River Thames, which in medieval times flowed rather closer to the castle than it does today.