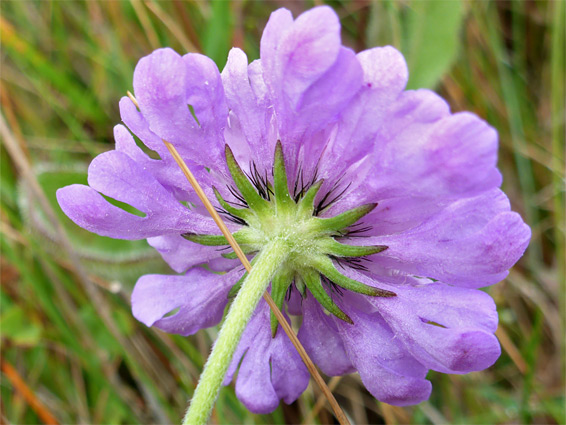 Small scabious (scabiosa columbaria), Kilve, Somerset
Scabiosa columbaria can be distinguished from the two similar scabious species (knautia arvensis and succisa pratensis) by having flowers with five lobes rather than four.

Common name:
Small scabious
Family:
Teasel (Dipsacaceae)
Scientific name:
Scabiosa columbaria
Main flower color:
Purple
Range:
England and Wales; commonest in the south
Height:
Up to 70 cm
Habitat:
Dry grassland, especially on calcareous soils
Flowers:
Flat-topped clusters, up to 3 cm in diameter, of several dozen flowers, which have tubular corollas opening to five lobes. Flowers are largest around the edge of the cluster. At the base of the corolla are a calyx of dark bristles, seen most easily underneath, where the bristles project beyond the narrow bracts at the base of the cluster. Bracts and stems have a covering of appressed hairs
Leaves:
Basal leaves, in a rosette, are coarsely lobed or toothed, with a large end lobe, while stem leaves are also pinnate, with narrower, more well-defined lobes
Season:
June to September
Rarity:
★★★★★ 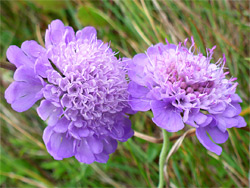 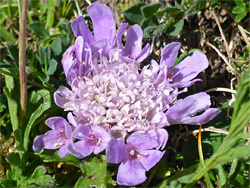 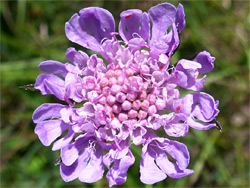 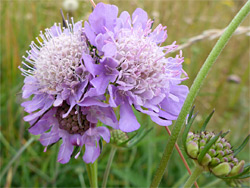 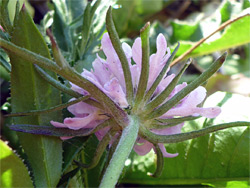 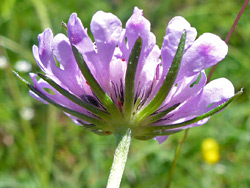 Base of a flower cluster 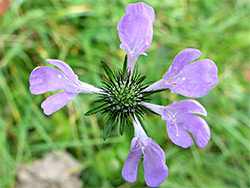 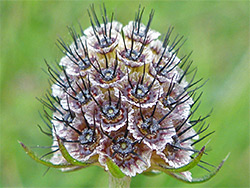