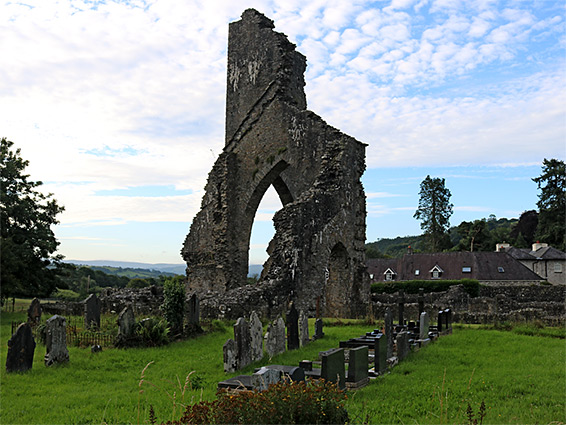 Ruined church from a medieval monastery, of the Premonstratensian order, set in scenic, hilly land 7 miles north of Llandeilo

Management
Cadw
Entry
Free
Location
Talley, on the west side of the B4302; SA19 7AX
Photo Tour (18 images)

The ruins of Talley Abbey in Carmarthenshire are not as extensive as other ancient monasteries in Wales like Neath or Tintern but they are still substantial, and made more impressive by the scenic, rural setting, in hilly land a little way west of Brecon Beacons National Park, 7 miles north of Llandeilo.

The abbey was established in this remote location by the ruler of the ancient kingdom of Deheubarth, Rhys ap Gruffydd, around 1185, as a Premonstratensian institution, also known as the Norbertinian after the founder, Norbert of Xanten; their practice was characterised by a life of contemplation combined with preaching, ministering and assisting the local population, and Talley was the only site for this order in Wales.

The ruling family of Deheubarth continued to support the monastery, and Rhys Fychan, a grandson of the elder Rhys, was interred in the abbey chancel in 1271. The site was never very prosperous, however, suffering from various local disputes, and further disadvantaged on account of its distant location. Towards the end of the 13th century patronage passed successively to two English abbeys, Welbeck followed by Halesowen, then later suffered further hardships following the Black Death of the 14th century and an English-led attack in 1427 which resulted in destruction of many of the buildings. It survived for another hundred years until the Dissolution of the Monasteries in 1536, after which most of the structures were dismantled, though the church was converted for use by the parish, and staged services until the 1770s, when it was replaced by the current parish church, adjacent to the ruins. 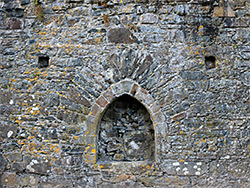 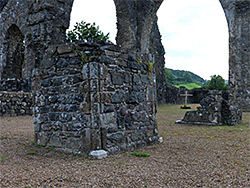 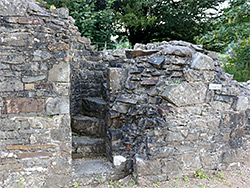 The village of Talley is set on a low divide in a shallow valley; a small stream (Afon Ddu) rises to the south, eventually meeting the River Tywi, while in the other direction are a pair of marshy pools, the Talley Lakes, draining northwards to the River Cothi. The lakes were used by the monks to breed fish. The monastery was built on the slightly higher ground separating the two drainages, the church orientated west to east, as was usually the case, with the subsidiary buildings to the south. The current parish church, dedicated to St Michael and All Saints, adjoins the site to the north, and was largely built using stones taken from the abbey church. The one road through the village passes by on the west side, and there are several parking spaces right by the entrance. The site is managed by Cadw, is open all year, and entry is free. 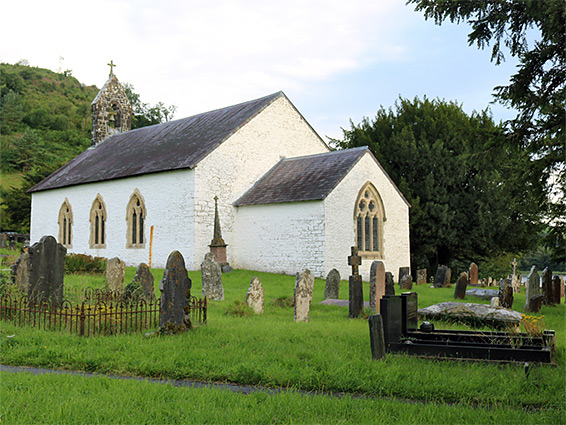 Church of St Michael and All Saints

When designed, the abbey church was planned to be a large structure, 235 feet in length, with a twin-aisled, eight-bay nave, and initial work proceeded according to this design, until financial constraints led to a significant reduction; the finished church was 162 feet long, including a four-bay nave with only one aisle, to the south. Column bases for the remainder of the nave are still visible, together with some parts of the unfinished walls, and these now rise to similar heights as most of the masonry of the completed church, the remainder having been removed soon after the Dissolution. 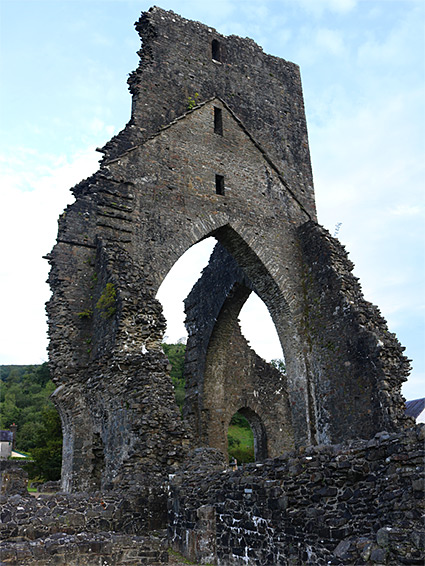 Remains of the tower

The nave leads to the central choir, defined by four wide columns that supported a square tower above, with presbytery to the east and transepts to north and south, each with three equal-sized chapels along their eastern wall. The bulk of the masonry is from the late 12th century, exceptions including some of the nave walls, early 13th century, and the southernmost chapel of the north transept, which was enlarged around the same time, and also a platform along the north wall of the nave, installed into the converted parish church after the Dissolution. The sacristy adjoined the south side of the presbytery, while the square, 74 foot wide cloister (the same length as the nave) bordered the south side of the nave; foundations of most of this survive as does a small fragment of its west range, but there are no traces of any of the other subsidiary buildings and little is known of them, even whether they were completed, though presumably some foundations exist below ground, underneath a group of more recent cottages immediately south of the church. 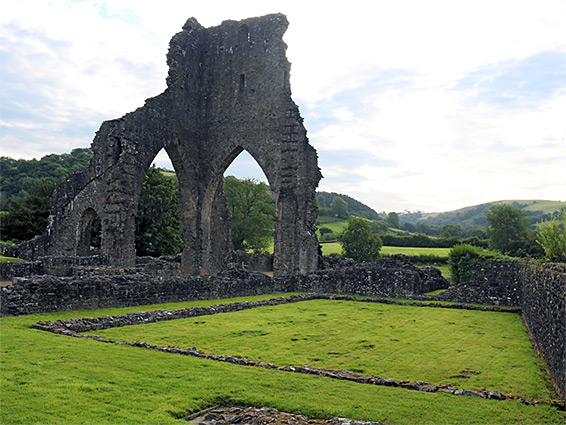 The majority of the walls of the abbey church are only around five feet tall or less; exceptions, rising to approximately the original height (up to 85 feet) are the east wall of the central tower, and the south and east walls of the north transept, each centred above an elegant, three-pointed archway. The main wall contains three openings, two below the roof level of the presbytery and a window above, while several other architectural features are evident including a stairway and piscina in the enlarged chapel, an elevated corridor within the wall separating transept and choir, masonry guides showing where other walls once joined, two gateways between the cloister and the south aisle, and another stairway in the north transept, once leading to an attic high above. 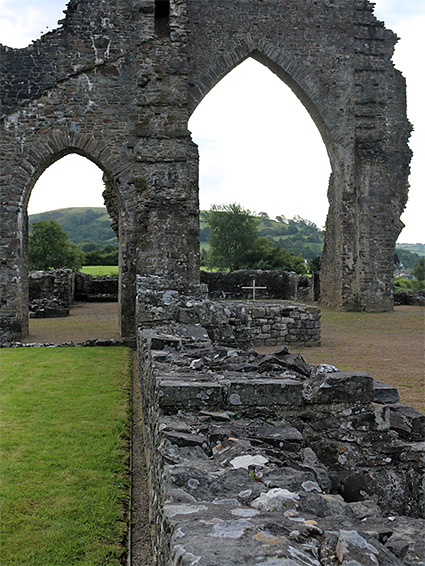