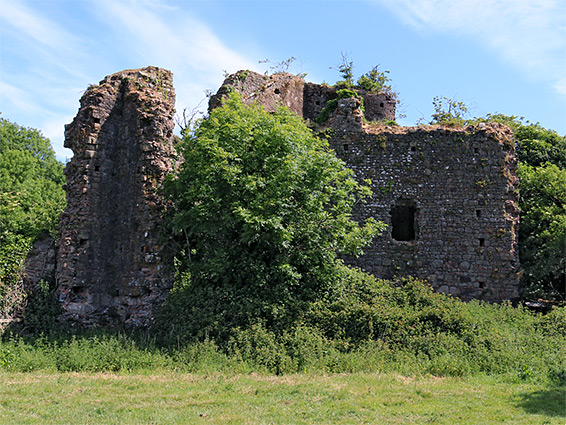 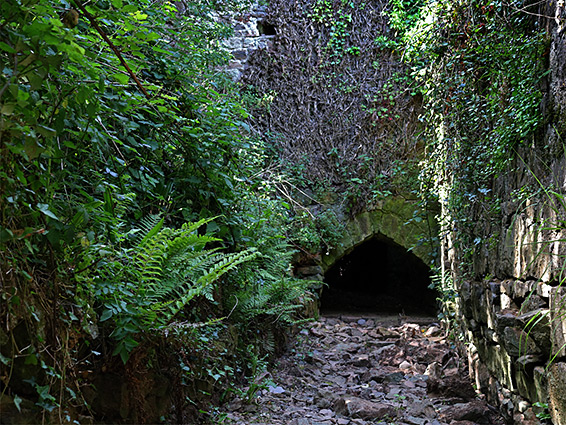 Small monastic remains adjoining a farm, near Burlescombe; overgrown walls of a rectangular building, above a culvert

Management
Privately owned; viewed from an adjacent footpath
Entry
Free
Location
Along an unnamed road on the north side of Burlescombe; EX16 7JF
Near Burlescombe in east Devon, Canonsleigh Abbey was an Augustinian priory, established towards the end of the 12th century by the local Lord of the Manor, Walter de Claville, and later refounded as a nunnery by Maud, Countess of Devon, dedicated to St Mary, St John and St Ethelreda. Little is known of its history though it seems, although small and not particularly wealthy, to have at least been financially stable, and survived without any major incident until the Dissolution in 1539, when there were 19 nuns resident, after which the monastic buildings were either reused, dismantled or left to become ruinous.

Only two significant structures remain; the twin-arched gatehouse, which is intact and used for storage, part of an adjacent farm, and the ruins of part of a domestic block which seems to have been converted to a mill in later times. This consists of several walls up to 20 feet high, containing a few openings, and situated above a culvert, once used as the reredorter. This site is liable to be overgrown with vegetation, and the best view is from the north side in the private garden of a house, but the south face may be seen along a public footpath.

The ruins are not obviously managed or marked, and the interior cannot easily be reached so the site as a whole has little to see. Just a few architectural features are evident, including windows, arches and a fireplace, giving some hint that this was once a relatively imposing and well-built structure. Foundations of other abbey buildings lie unexcavated and unmapped, beneath the surrounding fields. 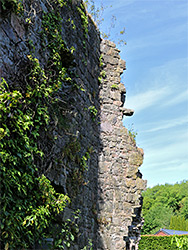 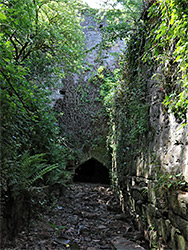 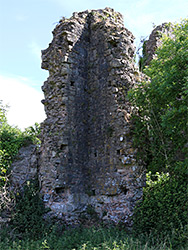 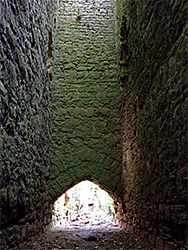 The abbey site is situated in gently undulating farmland northwest of the Blackdown Hills, 11 miles west of Taunton, reached by a road off the A38 - this leads through Burlescombe village, over the main London-Penzance railway line and the (disused) Grand Western Canal to the settlement of Canonsleigh, which is bordered to the north by a large quarry and to the west by an old railway line, a spur from the quarry. The former gatehouse is part of the small cluster of active buildings, another of which is thought to incorporate part of the former chapel of the priory. The ruins are reached by a short path starting along a driveway between two farm buildings, continuing through a gate and across a field. The visible frontage, on the south side, consists of a wall with arched doorway and broken window above, linked to a rectangular block with two parallel dividing walls and at least two more windows along the exterior. A small stream, sometimes dry, runs directly underneath through a culvert and can be used to reach the inside, where it is partly open above, though enclosed by tall walls that prevent climbing into the upper rooms. Broken walls show that the structure once extended both south and north. 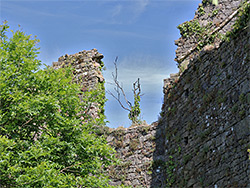 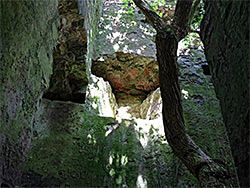 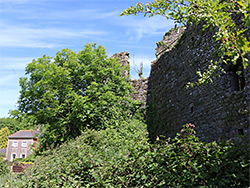 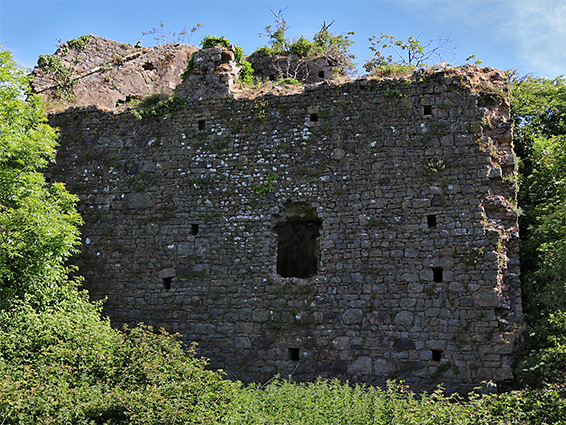