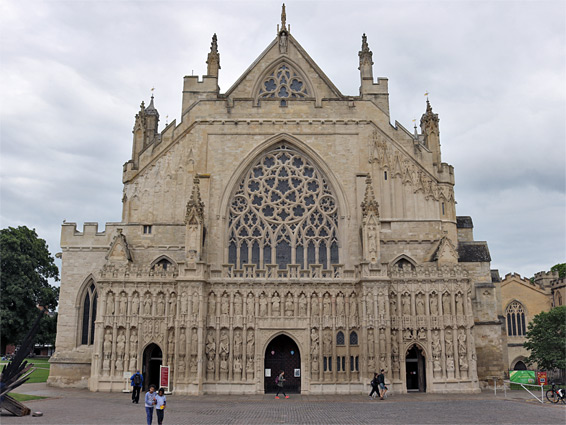 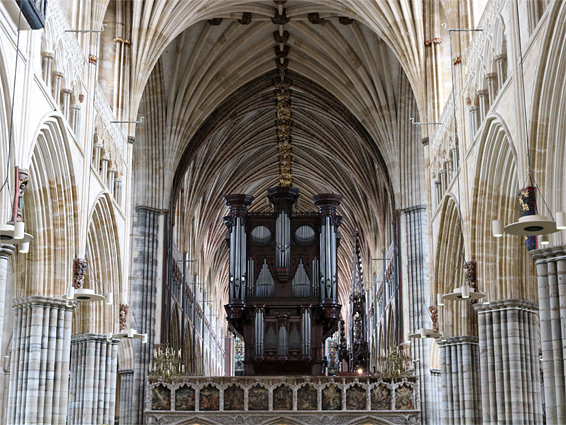 Large and beautiful building partly from the 12th century, featuring fine ceiling vaulting, ancient stained glass, a variety of carvings and many medieval tombs; a fine example of the decorated Gothic style of architecture

Management
Diocese of Exeter
Entry
£7.50 for adults, free for children
Location
In the centre of Exeter, near the River Exe; EX1 1HS
Photo Tour (29 images)

Exeter Cathedral, the largest religious building in Devon, has many features in common with the other great Norman cathedrals of England, including spectacular Gothic architecture, a large collection of tombs and memorials, fine carvings, ornate chapels, and medieval stained glass. Four particular features of note are a 14th century astronomical clock, two towers (one above each transept, rather than the more usual single, central tower), a magnificent vaulted ceiling - the longest uninterrupted ceiling of any building in Europe from this period - and the west front, which incorporates several rows of sculptures and a pair of sloping side screens, giving a distinctive, wide appearance, rather different to the taller, narrower profile of most cathedrals.

The cathedral was founded before the Norman conquest, in 1050, and the oldest surviving sections (the twin towers and part of the nave walls), are from the early 12th century, when a large church was built under the supervision of William Warelwast, the second Bishop of Exeter. This building saw service for about a hundred years, until, deemed too small and insufficiently grand, work on a replacement began, and this lasted another century or more, completed shortly before 1400. The redesign incorporated some of the earlier church, while adding many more features, and is now regarded as one of the finest examples of the decorated Gothic style of architecture, characterised by elaborate traceried windows, complex vaulting, and relatively slender supporting pillars.

Subsequent changes were largely superficial, limited to installation of several chapels, and outbuildings such as the cloisters and the chapter house. The cloisters were damaged during the English Civil War and part was subsequently removed, though little else was affected, and the only other major damage occurred during World War II, when a bomb destroyed one of the chapels and part of the nave. The cathedral was not a Catholic institution and hence was largely unaffected by Henry VIII's suppression of the monasteries. 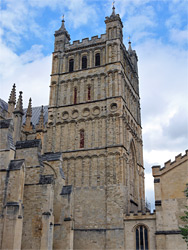 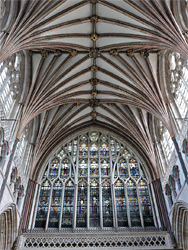 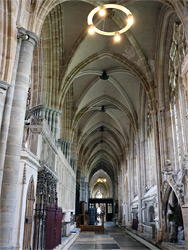 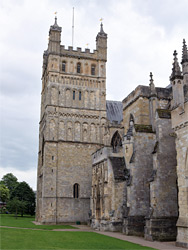 The Cathedral Church of Saint Peter at Exeter has a central location in the city, half a mile from the River Exe, bordered by gardens to the east, Cathedral Green to the north and the subsidiary buildings to the south, including the chapter house (which is now used as a cafe), the remains of the cloisters, and the Bishop's Palace, this a largely Victorian structure, on the site of the original, larger and much more elegant version. Visitor parking is available at a number of small, metered areas along the nearby streets. Unusually for English cathedrals which are free to enter, albeit with requests for donations, Exeter requires an entry fee, of £7.50 per adult, which additionally covers the cost of a guided tour (if desired). Children are free, as are people attending services, and those who come here to pray. It is also free for Exeter residents. The stated reason for the entry fee is to help meet the large cost of maintenance. Tours of other areas are staged on special occasions, including to the roof and to the towers. 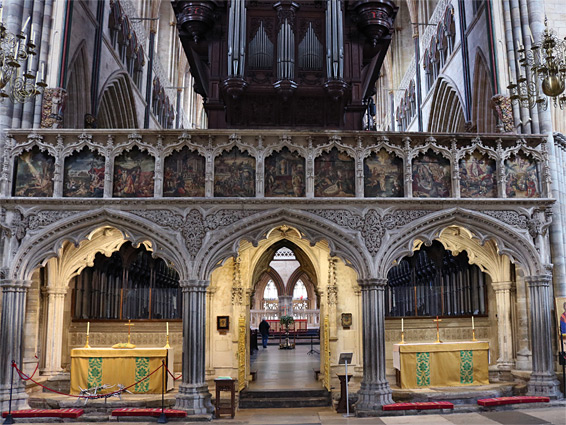 The pulpitum, below the organ

Highlight of the exterior of Exeter Cathedral is the west front, most of which dates from the 14th century redesign, though the earlier Norman masonry is largely intact, just covered by the later additions. The lowest section consists of the image screen - three rows of niched statues, representing angels, kings and prophets, and incorporating three doorways, to the nave and the two aisles. The upper tier of the screen was added sometime after the remainder, around 1470. Above is the great west window, its lowest section obscured by the screen, and all containing Victorian stained glass. The window incorporates a large rose at the top, and reticulated lights below. The walls either side of the window extend to two large screens, sloping on top, which hide the flying buttresses beyond, and give the cathedral its unusually wide appearance. The other most readily viewed part of the exterior is the north side, which displays an array of buttresses, pinnacles and traceried windows of different shapes, plus the north tower and the north porch. 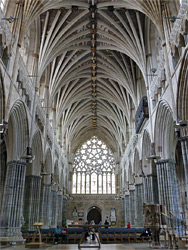 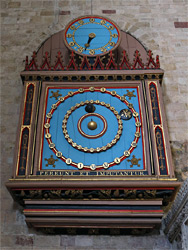 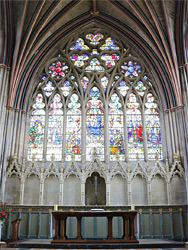 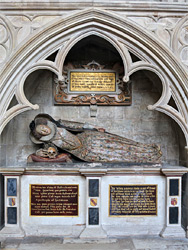 Entry into the cathedral is through the leftmost door in the west front, into the north aisle of the nave. The nave is lined by eight pairs of fluted, square-based pillars, leading to the crossing, between the north and south transepts. Because there is no central tower, unlike most other cathedrals and churches, only the two transept towers, the ceiling is able to continue uninterrupted all the way across the choir to the far end, bordering the lady chapel; the ceiling is 315 feet in length, supported by fine vaulting that incorporates over 400 bosses, at all the rib intersections, with designs including animals, plants, people and coats-of-arms. Along the sides of the nave are the 14th century minstrels' gallery (an elevated balcony featuring a row of 12 carved wooden angels holding musical instruments), the 16th century baptismal font, the pulpit, and the rondels, these a recent (1980s) addition; a group of embroidered cushions illustrating events in the cathedral's history. The north transept contains an astronomical clock, constructed around 1484; this has a bright blue face with red and gilt detailing. Entry to the choir from the crossing is through the stone pulpitum from the early 14th century, decorated along the upper level with a series of biblical paintings from the 17th century. Above is a huge organ, its tall, narrow pipes complementing the parallel Gothic columns all around. Overlooking the far side of the choir is the great east window, which is made of stained glass from the 14th century. The choir contains a collection of 50 misericords (wood carvings on the tip-up chairs) from the 13th century - the earliest examples in England, and also the bishop's throne, an imposing 59 foot high structure of dark, carved oak, completed in 1316. The aisles around the choir pass several chantry chapels; one (St James and St Thomas the Martyr) having been restored after the original was destroyed by the World War II bombing, and also a collection of tombs. Two of the most ornate and colourful, both covered by canopies, are of Bishop Edmund Stafford (died 1419) and Bishop Walter Branscombe (died 1280). 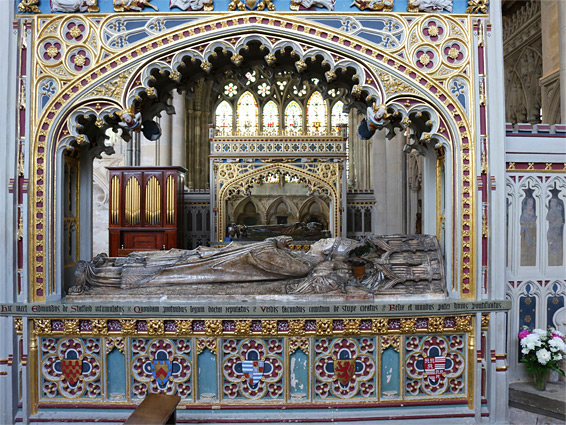