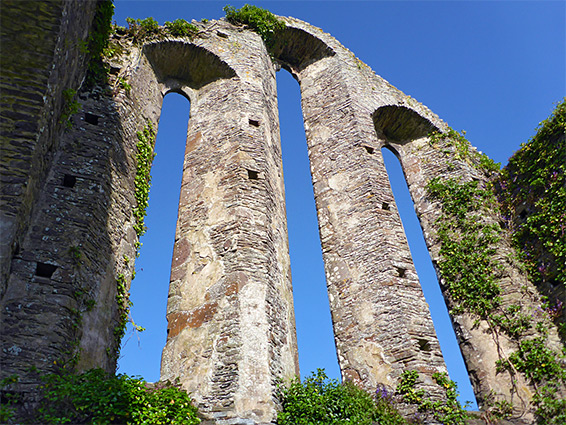 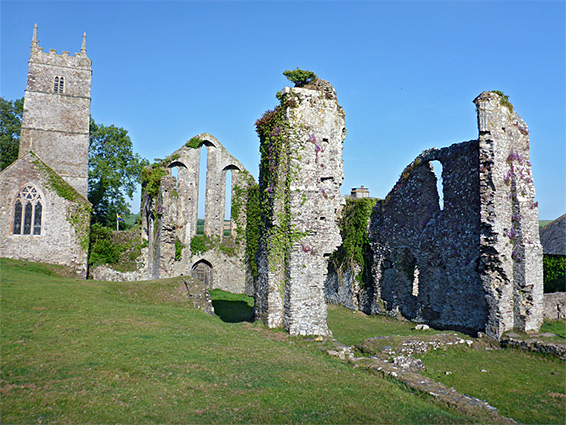 Picturesque ruins of the church from a 13th century Augustinian priory, in a small village south of Barnstaple; adjoins the current parish church

Frithelstock Priory in rural northwest Devon was an Augustinian institution, founded around 1220 as a subsidiary house to Hartland Abbey, 20 miles west near the coast, and it endured without major incident until abrupt closure in 1536, as part of the Dissolution of the Monasteries. The patron, Robert de Beauchamp (died 1252), was a judge and baron, owner of the local manor. The priory was dedicated to St Gregory, and its buildings were augmented over the next hundred years to incorporate all the usual monastic structures, including cloisters, sacristy, chapter house, great hall and dormitory.

The priory was never very large or prosperous, and at the time of the Dissolution, only the prior and four canons were resident. The site was soon partly dismantled, initially by stripping all the lead in the church roof, by order of the Crown, then by removal of most of the subsidiary buildings, though some were incorporated into a farmhouse (Cloister Hall), which is still intact and occupied, while the church quickly became ruinous.

Today the church is the only identifiable part of the priory, situated in a field between the farmhouse and the parish church (St Mary and St Gregory), which predates the priory, though most of the visible masonry is from the 14th century, or later. The ruins are privately owned, however it seems reasonable to climb over the low stone wall around the field, usually occupied by a herd of cattle, and walk around the site. 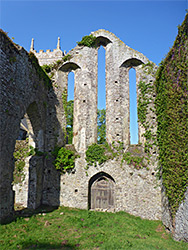 West end of the nave 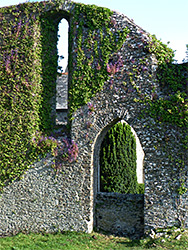 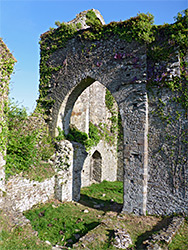 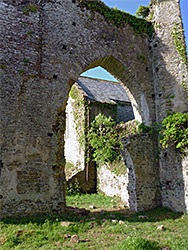 The tiny village of Frithelstock is located on high ground on the west side of the River Torridge, five miles south of Bideford, accessed by one road. The parish church sits on the north edge of the village, set back 150 feet from the road on the far side of the graveyard, the east wall of which borders the field containing the priory ruins.

The priory church initially consisted of a nave and chancel, with walls of coursed slatestone; it was extended to the east around 1330 by addition of a lady chapel and to the southwest by construction of a square tower, accessed from the nave, and later connecting the building to the east wall of the parish church, after this was altered in the 15th century. The chapel and the tower are evident only from foundations, but the west and north walls of the remainder are mostly intact, together with a smaller part of the south wall. The west front contains three tall, graduated lancet windows with trefoil heads, above the original main doorway, now closed by a 17th century wooden door that leads to the farmhouse garden, site of the cloisters. The north church wall contains another lancet window plus part of four upper clerestory windows, while near ground level are several pointed-arched openings, doors and windows, some blocked up. The short surviving south section of the nave wall has a high archway, once connected to the tower, while the only other significant masonry fragment is a tall, buttressed wall at the southeast corner of the chancel. Strewn over the ground, partially hidden by earth and grass, are many masonry blocks, from walls and tracery. The field to the southeast contains several low banks indicating the position of outbuildings, and just beyond, the gatehouse to the priory is said to have survived into the 18th century, right next to the road, in what is now the eastern portion of the graveyard of the parish church, after this was extended around 1900. 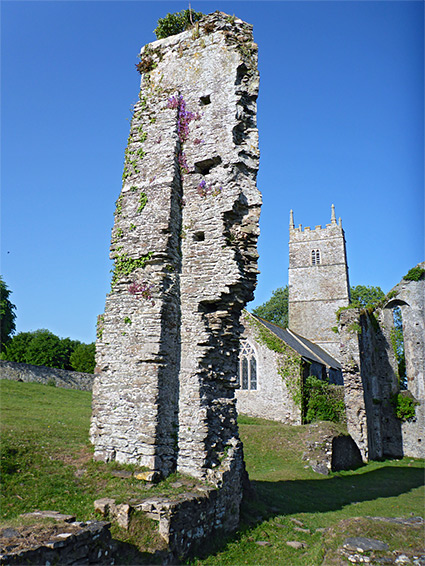