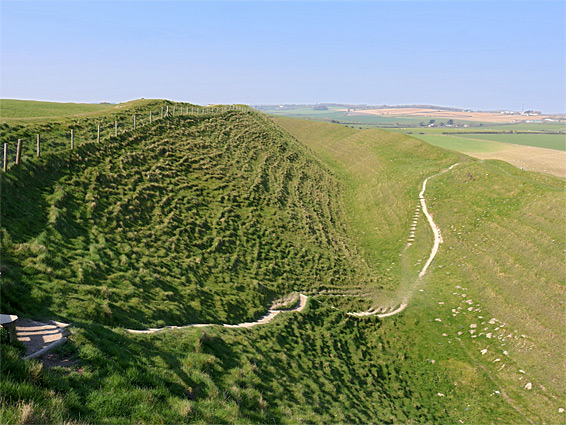 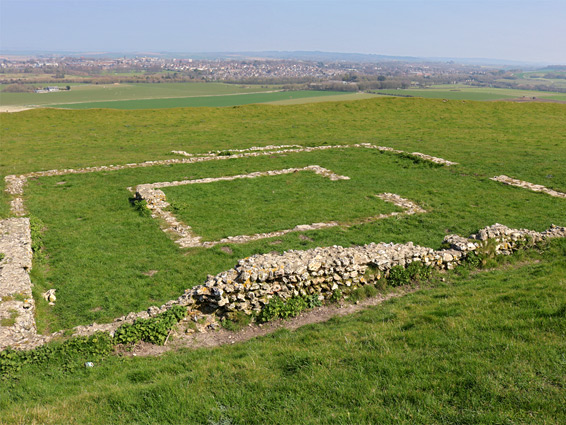 The largest hillfort in the country - half a mile across, enclosed by ramparts and ditches, on a chalk ridge south of Dorchester. Contains the walls from a Roman temple

Management
English Heritage
Entry
Free
Location
At the end of Maiden Castle Road, 1 mile southwest of Dorchester; DT2 9PPT
On a chalk ridge one mile southwest of Dorchester in Dorset, Maiden Castle is the largest Iron Age hillfort in Britain, centred on a flat, oval area 2,400 by 900 feet in extent, enclosed by up to four parallel embankments separated by deep ditches, with entrances at either end, the structure aligned east to west. The earliest fortification on this site, approximately 3000 BC, was a much smaller enclosure including a barrow mound, occupying a cleared area in the woods which at this time covered all of the land; the hillfort was constructed around 600 BC and enlarged westwards 150 years later, to form the structure seen today.

Like all such hillforts there are no stone or wooden remnants, only the earthworks, though they are still large and impressive, with ditches up to 30 feet deep, and the longest, the outermost, 1.5 miles in circumference. The interior is an open field, used for grazing, featureless apart from two small tumuli and, more interestingly, the foundations of a Roman temple dating from the 4th century. There was however no great Roman presence at this location, and the whole place was entirely abandoned by the sixth century, subsequently used only as farmland. Archaeological investigations were carried out in the 1930s and 1980s, otherwise the site has lain undisturbed for many centuries.

When built, the ramparts would have been pure white chalk, giving the fort a most dramatic and imposing appearance from afar, rising 200 feet above the surrounding landscape. Now all is grass-covered, the embankments more rounded, and the structure of the place is only properly evident from the air; the earthworks are not so photogenic at ground level.

The name, Maiden Castle, is of relatively recent origin, first recorded in 1607, thought to mean a fortification that has never been conquered. 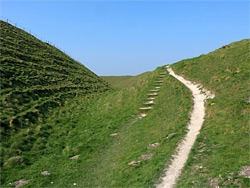 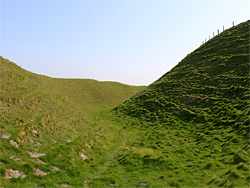 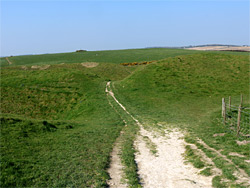 The castle is open all day, all year, and entry is free. Parking is at the end of Maiden Castle Road, which forks off the B3147 in Dorchester. A short walk uphill reaches the main, western entrance, then the usual walking route is across the centre to the Roman temple foundations, exiting via a secondary path about halfway along the northern edge; an alternative is to continue to the eastern entrance, and return by one of the ditches or embankments. The temple consists of a square room at the centre with a wide corridor all around, giving a total width of 40 feet, while just to the north is a smaller, two-room building, probably housing for the temple priest. Structures from the actual hillfort are evident only from the 20th century excavations, which revealed square arrangements of post holes, thought to be from above-ground storage facilities, and circular drainage ditches which would have been built around living quarters. The buildings were arranged along roadways, suggesting a high degree of organisation, though by the end of the Iron Age the settlement had declined, and the remaining people inhabited only the eastern end of the fort. 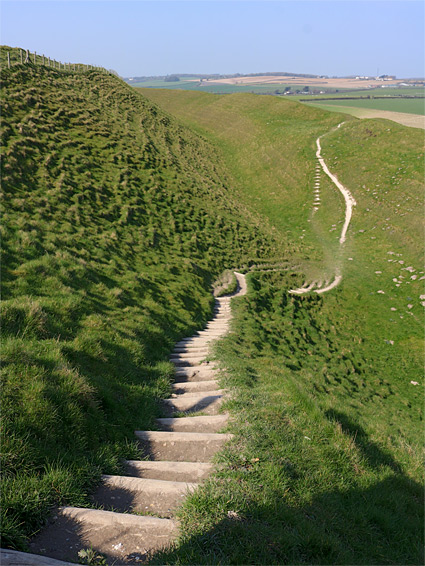 Steps to the north, in and out of the inner ditch
All Contents © Copyright UK Southwest | Comments and Questions | Links | Site Map | Home