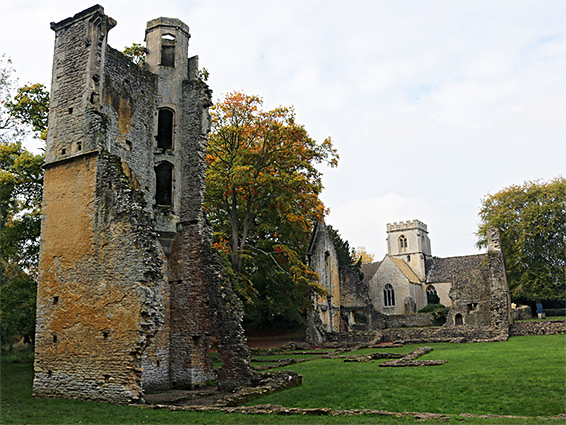 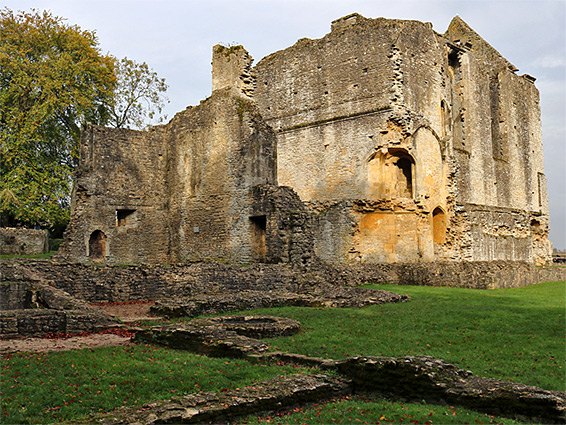 Photogenic ruins of a grand 15th century mansion, including a hall, chapel and chambers, with a peaceful setting beside the River Windrush, lined by ancient trees

Most medieval ruins in the UK are either castles or monasteries; mansions are much less common, but Minster Lovell Hall is a fine example, a grand manor house constructed around 1440 and occupied for nearly 300 years before being abandoned and partially dismantled. The remains though are still substantial, including a hall, chapel and two sections of residential buildings, all formed of local limestone clad by richly-coloured ashlar, and set in a peaceful and secluded location at the edge of a tiny village alongside the River Windrush, three miles west of Whitney.

The manor took the form of a quadrangle, with ranges on three sides and a single wall to the south, facing the river. The site is bordered by open fields to the east, a patch of mature trees to the west and by the village church (St Kenelm's) to the north, constructed of similar materials to the manor at about the same time, so the ruins have a pleasingly natural and harmonious setting, out-of-sight of any modern development.

The site is managed by English Heritage and is free to enter. Visitation seems to be low, despite the impressive stature of the ruins, perhaps because the site has a rather out of the way location, away from main roads. 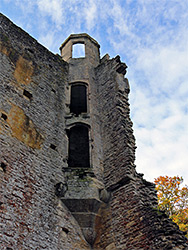 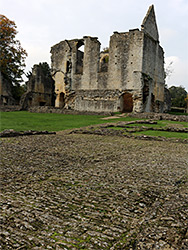 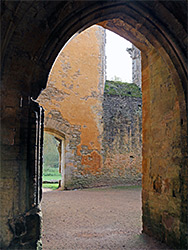 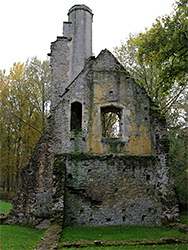 Minster Lovell village lies on the north side of the River Windrush in a shallow valley along the east flank of the Cotswolds, just over a mile from the A40. The ruins are on the east edge, reached via the short side road to St Kenelm's Church. Parking is available at the road junction, from where the hall is 800 feet away; a path leads through the graveyard, past the church and enters the ruins from the north. Another possible approach is from the east, via a much longer path that follows the river, starting in Witney. 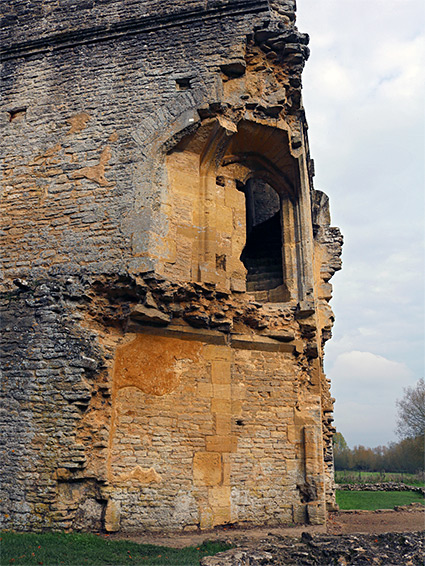 The name of the village references the local landowning family, the Lovels, who had resided here since at least the early 12th century. The site of the mansion was previously occupied by a Norman priory though no trace of this remains. There was also an earlier residence, replaced by the current structure in the 1440s, this built by William Lovel (1397-1454), 7th Baron, who had become rich after successful campaigns during the Hundred Years War. The great majority of the house dates from this time, the only significant later addition being the tower at the southwest corner, added towards the end of the 15th century, by grandson Francis Lovel, the 9th Baron, who was elevated to Viscount after serving Henry VI during the Wars of the Roses. The Lovel's occupation of the manor house was relatively short-lived, however, and it was taken over by the Crown following the Battle of Bosworth in 1485. Over the next century at least a dozen unrelated people resided here, until transfer to Sir Edward Cooke in 1603, after which the mansion stayed with the family until in 1730s, when the Cookes moved to their main residence, in Norfolk. The majority of the structure was dismantled in 1747 and materials sold for reuse; one section, the northwest room, was later converted to a cottage, but all was derelict and abandoned by the time the ruins were acquired by the government, in 1935. 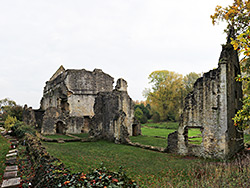 North side of the mansion 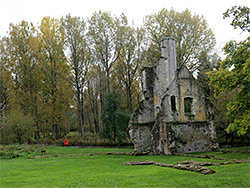 Trees by the river 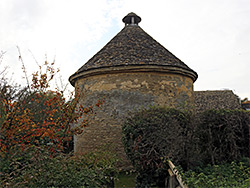 The largest section of the ruins is the great hall in the northeast corner, originally accessed from the north, via a cobbled path from the church. The vaulted entrance passageway led underneath the chapel, a first floor building on the north side, of which not much remains, though the walls of the two rooms underneath are mostly complete. The hall has unusually high walls, up to 40 feet, and large windows along each side. To the west was a ground level chamber below a solar room, accessed via a spiral staircase, the upper section of which is still complete, though inaccessible from below, and then the northwest building which links to the west wing, a series of residential rooms. The east wing contained service rooms including pantry, bakehouse, kitchen, well and stables, with a cobbled floor that survives intact. Partly below the kitchen are some fragmentary foundations, thought to be from the earlier manor house. The tower at the southwest corner, the later addition, had four stories, the upper levels accessed via a staircase through an octagonal turret, and is illuminated by oriel windows. Three other surviving contemporary buildings lie a little way north - two barns, now converted to a private residence, and a circular dovecote, which is open to the public and may be viewed along a short path. Three shallow pools bordering the river where once fishponds, while land on the east side of the manor was used to grow vegetables and graze animals. 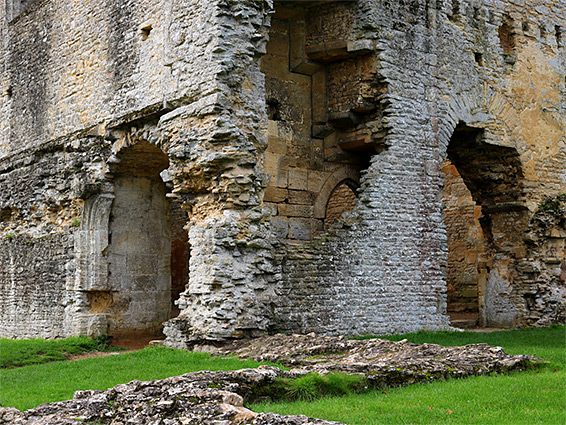 Southeast corner of the hall