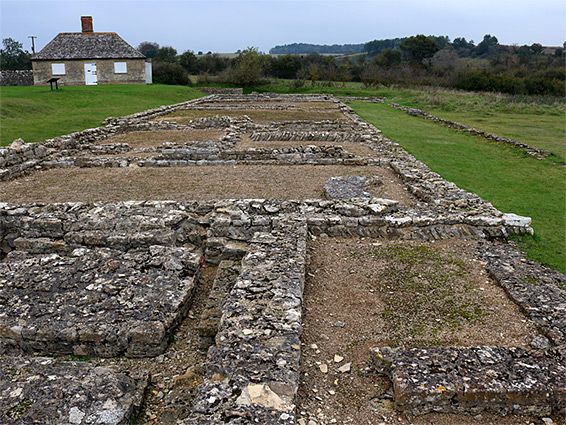 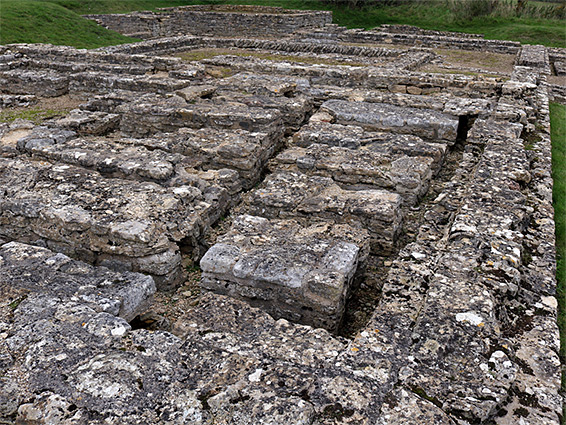 Foundations of a Roman villa, inhabited from the 2nd to 5th centuries, in a rural setting close to the ancient travel route of Akeman Street

Management
English Heritage
Entry
Free
Location
Five miles northeast of Witney, off the A4095; OX29 6PZ
Most Roman settlements in the UK were villas; groups of buildings with varying purposes including storage, residential, agriculture, worship and bathing. Over 500 have been identified but only around two dozen have visible remains in a natural setting, and in Oxfordshire there is just one - North Leigh Roman Villa, a relatively large settlement established around the start of the second century (AD) and inhabited until the Romans left the country in the fifth century.

The site has a quiet, rural location surrounded by fields, not adjacent to any modern village, beside the River Evenlode less than one mile from the course of Akeman Street, a major Roman travel route, linking Fosse Way to Watling Street.

Like nearly all similar villas the remains are just foundations, first excavated in 1812-3, after being buried for many centuries. The villa had a traditional courtyard design, with rooms on three sides of a central square, and a wall and the main entrance on the other side, here facing the river. Rooms along two lengths of the courtyard are visible today, including a good example of hypocaust (underfloor heating) and one room, probably the main dining area, with a nearly complete mosaic floor, now enclosed by a stone building for protection. 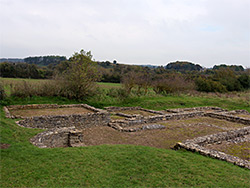 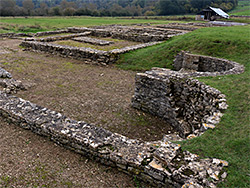 The site of the villa, at one side of a low ridge within a bend on the river, was occupied prior to Roman times, as shown by discovery of Iron Age pottery during excavations. The first Roman buildings, along what became the northwest range, were in place at the start of the second century, then the settlement was enlarged in the third century by addition of the northeast and southwest ranges. The final phase, probably early in the fourth century, involved remodelling of the northwest rooms and completion of the enclosing wall to the east. At some point various other structures were built outside the central area, along the banks of the river; the positions of some have been revealed only recently, by aerial photography. The villa, one of the largest in the country, incorporated four baths, 11 hypocaust rooms and 16 rooms within a mosaic floor, reflecting the high status of the settlement. There is no evidence of subsequent use following the Roman withdrawal in the fifth century so it seems the place was left to decay and was not disturbed until the early 18th century excavations, led by the landowner, the Duke of Marlborough. At this time two stone buildings were installed, one to protect the largest of the mosaics; two similarly impressive floors had already been destroyed by souvenir hunters. 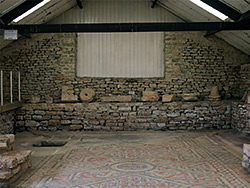 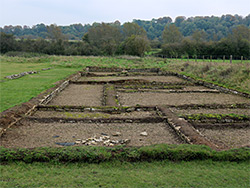 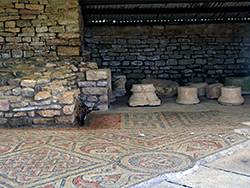 Edge of the mosaic

The villa is reached by a country lane off the A4095, 2 miles from the village of North Leigh, and 5 miles from Whitney. Parking is in a layby on the south side of the road, from where a track leads through some trees and down a slope to the entrance, a short distance along a another track. The site is open at all times. At the entrance is one of the two stone cottages, at the northwest corner of the villa, where the ruins include two curved enclosures, part of one of the bathhouses. From here the main section of the ruins, the northwest range, extends south, to the other cottage at the far end, protecting the mosaic floor. This building is locked, open only on ten days each year, the second weekends of each month between May and September. The floor was restored and relaid in 1929, and, when the building is closed, can be viewed through two windows. A second mosaic floor is close by though usually covered by a wooden screen, while the others are buried by earth for conservation. Several more rooms are visible in the southeast wing, of which about half is excavated; the remainder, and the north and east sections of the courtyard, are also buried. 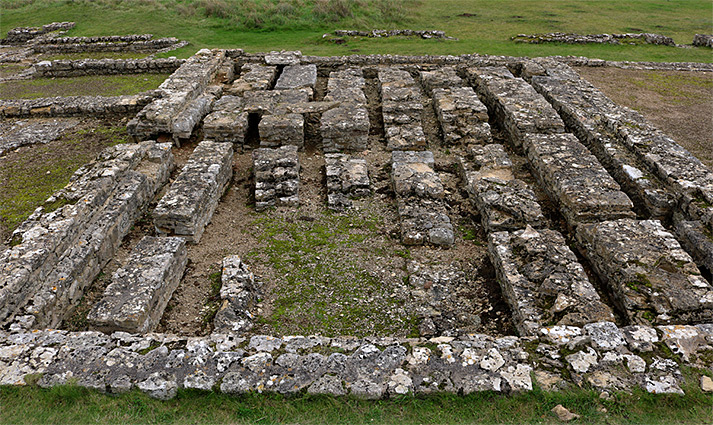 Hypocaust in the northwest range