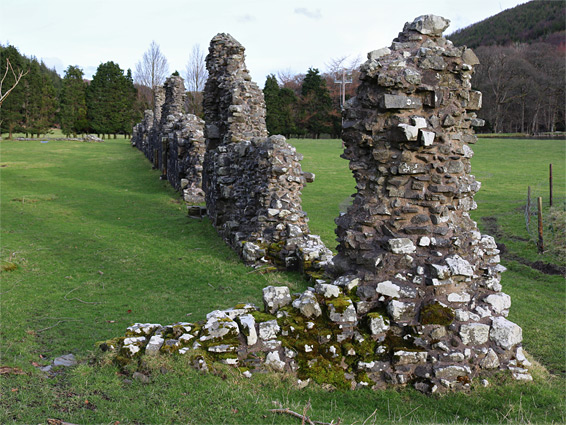 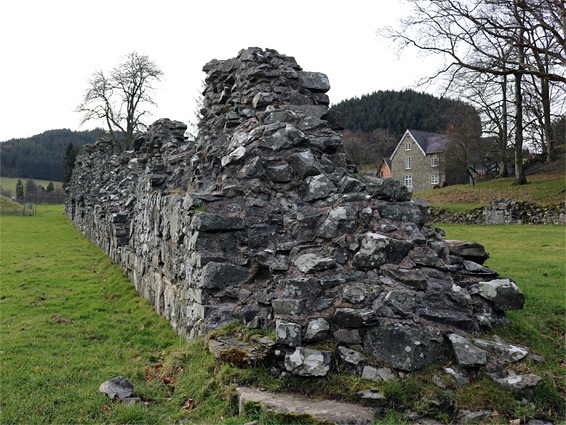 Low walls from the nave and transepts of a once great monastic church, only partially completed, in a peaceful valley beneath wooded hills

Management
Cadw
Entry
Free
Location
The village of Abbeycwmhir, 5 miles north of Llandrindod Wells; LD1 6PH
In a remote, hilly area of central Wales stands the little-known ruin of the once great monastic church of Cwmhir Abbey, a Cistercian institution that would have been the largest church in the country if completed as planned, however due to shortage of funds and political instability only the nave was finished, closed by a wall at the east end, were the crossing and transepts would have risen. Nevertheless, the abbey endured for well over 200 years, until closed in 1536 as part of the Dissolution of the Monasteries, after which it was partly dismantled and the remains further degraded by fighting during the English Civil War. Now just the lower few feet of the walls of the nave remain, isolated and rather forgotten, in a field on the floor of the valley of Clywedog Brook, enclosed by steep, wooded slopes to the north and south; a quiet, peaceful and evocative location.

The site is not obviously managed, nor signposted, but easily reached, by a short walk down a slope on the south side of the road through the valley, just east of the tiny village of Abbeycwmhir, 5 miles north of Llandrindod Wells. Only a few architectural details are visible, including the base of three columns, and several niches in the walls, and the whole place can be seen in just ten minutes or so, but the main appeal of this site is not the building itself, but rather the combination of the ancient crumbling stones and the isolated rural surroundings. 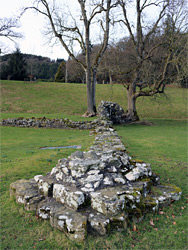 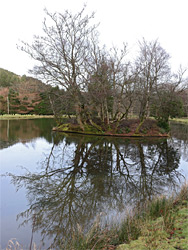 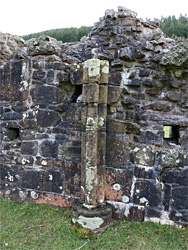 The monastery was established by local ruler Cadwallon ap Madog in 1176, as a subsidiary house to Whitland Abbey (now within Carmarthenshire), though he was killed in battle just three years later, before any significant construction. Funds and support were later provided by the princes of Gwynedd, sufficient for work to begin early in the 13th century on a huge, cathedral-like church starting, somewhat usually, with the nave, at the west end. This had 14 bays, and measured 250 by 90 feet in size; the next sections were to be the walls of the north and south transepts but it seems these were not completed, and instead a wall was built across the east end of the nave, which was subsequently used as the church. A few subsidiary buildings were probably erected, around square cloisters to the south, but the site was damaged during the 1401-1402 rebellion against the English led by Owain Glyndwr, and not developed any further. After the 1536 Dissolution, when the abbey was occupied by only three monks, the site was sold to a local family, who converted part of the nave to a house, while other sections were taken away and used elsewhere, including several arches and columns in St Idloes Church (in Llanidloes), and some smaller carvings in the nearby Cwmhir Abbbey Hall. By the 19th century the site was abandoned and overgrown, with little masonry visible, but excavations have uncovered the surviving foundations of the nave, and the west walls of the two transepts. 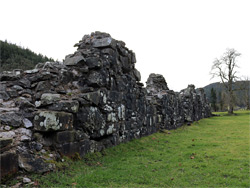 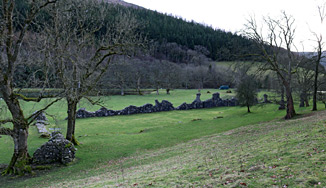 The abbey, from the north

The church walls are constructed out of limestone and quartzite rubble, now mostly brown to dark grey in colour, and although the cladding is mostly missing, some does survive along the exterior on the south side. The tallest wall fragment is about 16 feet, also to the south; the north wall is lower and less complete. The lower portion of three cylindrical shafts survive, two along the south wall and one to the north, as do the diamond-shaped bases of three arcade columns and the two piers of the crossing, linked by the foundations of the later closing wall. Beside this is a modern slate monument to Llywelyn ap Gruffydd (died 1282), the last native prince of Wales, who is buried somewhere in the vicinity. The field beyond the abbey extends to Clywedog Brook, at the foot of a forested hill, part of which conceals an overgrown quarry, possibly used to provide building material for the abbey. Also beside the brook is a photogenic fish pond excavated in Victorian times, containing a small, tree-lined island. 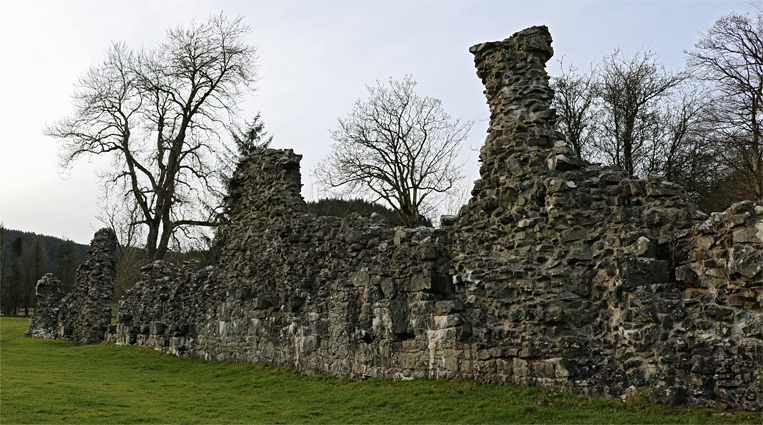