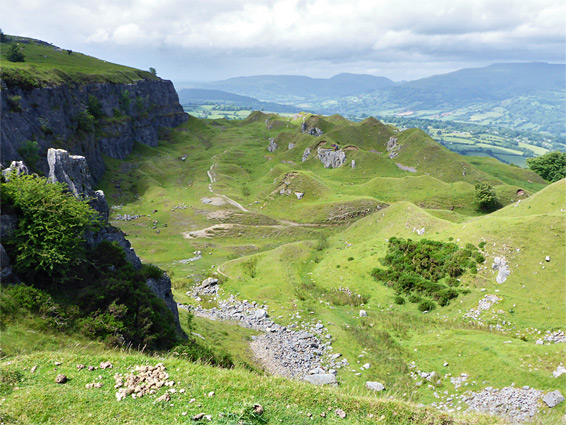 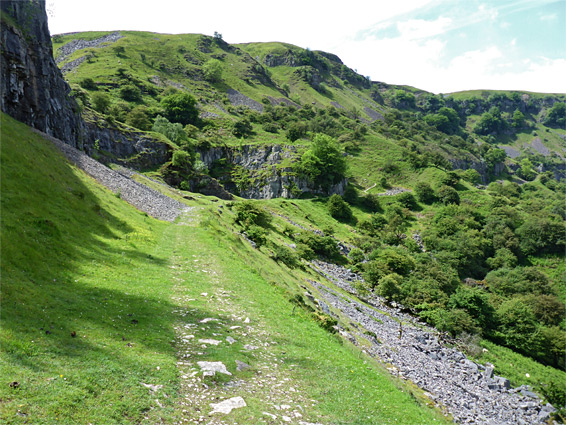 Limestone cliffs below the rim of a grassy, boggy plateau with a wind-swept lake; site of several cave entrances, and 18th century quarries. A noteable wildflower location

In the vicinity of Crickhowell, in Brecon Beacons National Park, the south side of the valley of the River Usk is formed by a line of cliffs and scree slopes below the north edge of an extensive plateau, Mynydd Llangatwg (Llangattock Mountain) which has only an ill-defined high point, 1,736 foot Twr Pen-cyrn, as most is essentially flat for several miles. The steep north edge of the plateau is the Llangattock Escarpment, named after the nearby village of Llangattock, and besides its fine natural scenery, giving grand views of the Usk valley and across to the higher peaks of the Black Mountains, the place is also notable as the site of some old quarries, established around 1790 and abandoned for nearly a hundred years; remnants include excavated rocks, a series of undulating grassy mounds - former spoil heaps - and exposed, cut limestone faces, merging with the natural cliffs.

The main quarry extends about half a mile from the nearest parking area, though a hike here can easily be extended further along the base of the escarpment, always high above the valley floor, passing some lesser quarries, more cliffs and a number of cave entrances, and a loop can be made by climbing to the top of the plateau and returning close to the rim, perhaps with a diversion further south to Pwll Gwy-rhoc (witches pool), a small lake filled with dark water, stained by the tannin leaching from the surrounding peat bogs. The round trip including the pool is five miles.

Much of the Mynydd Llangatwg plateau is boggy, covered in heather and thick grass, though the water drains readily in some places, through an overlying gritstone layer into the limestone bedrock, sometimes forming sinkholes that link to one of the most extensive cave systems in south Wales, with several dozen entrances across the slopes below. The escarpment is also a good place for summer wildflowers, and a number of endemic species occur only here, on the exposed cliffs and sparse limestone grassland. Part of the escarpment is protected as Craig y Cilau National Nature Reserve on account of the variety of plant life, with over 250 species found here. Amongst the endemics are a whitebeam tree and two hawkweeds, hieracium asteridiophyllum and hieracium cillense. Craig y Cilau is the cliff forming the western section of the escarpment; the cliffs on the east side, where the quarries are, are Chwar Mawr and Daren Cilau. 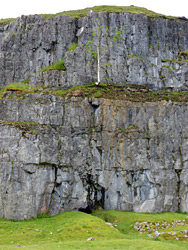 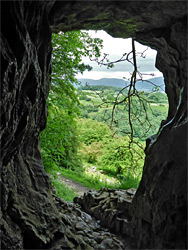 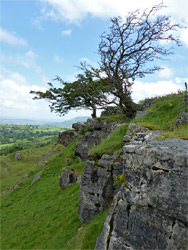 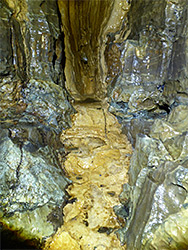 The usual start point to explore the Llangattock Escarpment is a (free) parking area along a narrow road that circles round three sides of Mynydd Llangatwg, reached by other roads, 2 miles south of the A4077 near Crickhowell or 3 miles west of Gilwern on the A465. This is a secluded location, not near any settlements, and the place is never busy. The hillsides are mostly free of trees, covered instead by grass and bushes, and the land slopes quite gently up to the south by a hundred feet, to the base of the line of low cliffs below the plateau rim. Several paths ascend from the parking area to the main track, which in places follows a former tramway, used to transport the quarried stone to the Brynmawr ironworks. 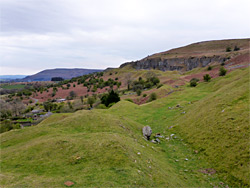 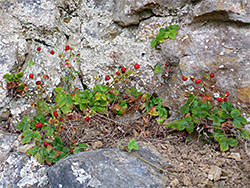 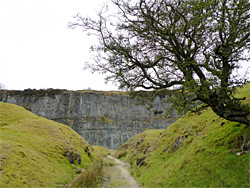 Path to the quarries

The path moves westwards through the first old quarry, past some of the conical, grass-covered mounds then, after a short gap, reaches the main section, framed by higher cliffs to the south, in places with seasonal pools and seeps along the base. Here the tramway led down a steep incline towards the valley floor, but another trail continues, descending slightly, while a narrower path explores at a higher level for a while, later dropping down to the main route. The trail curves south into a little valley, where several small streams flow down from above, at least one emerging out of a cave. Just beyond is the largest cave system, Eglwys Faen, which has several entrances, the main one about 50 feet above the path, leading to a large passage at least 30 feet wide and almost as high, off which are various narrower tunnels, most easily explorable, needing only a torch. Further east, the land below the cliffs becomes wooded and steeper, forcing the main path to descend, though it continues to follow the plateau. A narrower route climbs to the top, via a ravine, reaching the rim in the vicinity of a sinkhole and a rare example of a raised peat bog, named Waen Rudd. Pwll Gwy-rhoc is a thousand feet south, a short though slow walk over sometimes wet ground. This location is often very windy, and the level surroundings are rather featureless, but the pool itself is quite striking, owing to its dark water and remote, exposed setting. A similarly boggy walk west leads to drier ground near the plateau rim, and to a faint path, which follows the escarpment east, back towards the quarries; perhaps used more by the resident sheep than by hikers. A large cairn marks a minor summit. A ledge just below the rim gives some of the best views of the quarries, while the main path continues round the far side of the easternmost quarry then back down to the old tramway.