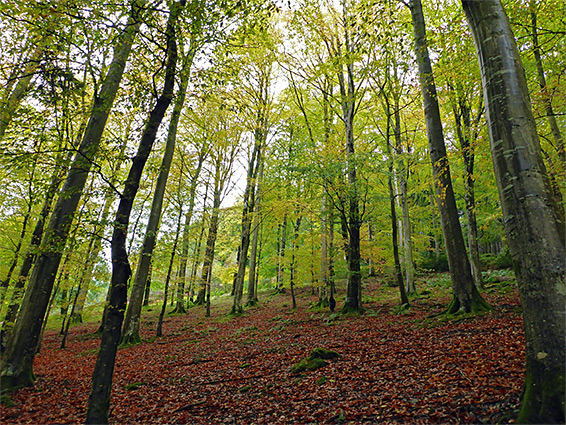 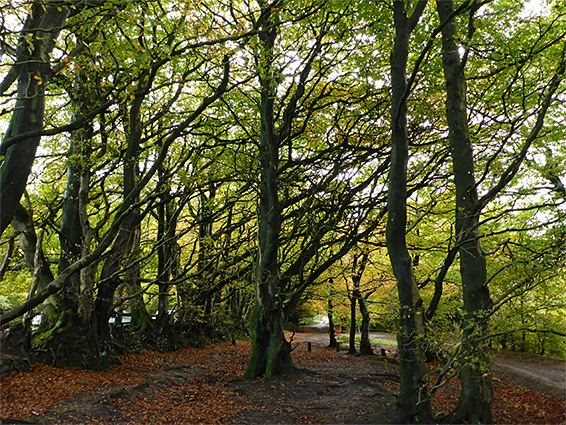 Walk up a forested combe containing a stream, to the ancient drove road along the Quantocks ridgeline, returning via more woodland and a smaller combe

One of the most popular access points to the high country of the Quantock Hills is the parking area at Triscombe Stone, at the end of a paved road, from where an ancient trackway, the Drove Road, runs north and south along the central ridgeline, open to walkers, horses and bicycles. The stone itself is a small marker post from the Bronze Age, just beyond the car park.

There are several options for circular walks in the vicinity including one down Cockercombe, a deep wooded valley to the east; this contains a small stream, and although most of the trees are conifers, some patches of native beech trees remain and so the streamside scenery is especially pretty in autumn when the leaves are changing colour. Also of interest is a short ravine through red rocks at the upper end of the combe, leading to a spring, the main source of the stream.

A loop can be made using one of two paths to the north, both through the conifers, one following an east-west ridge, the other descending into a smaller valley, Keeper's Combe; the paths meet again close to the road into Cockercombe, along which is another parking place, an alternative start point for the walk. This is the same road that leads to Triscombe Stone, mostly traversing the northern slopes of the valley, not near the stream. 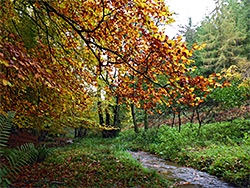 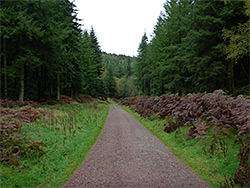 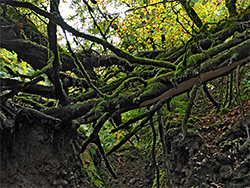 The lower parking place at the mouth of Cockercombe is beside a building used by the Forestry Commission, positioned directly above the stream, which flows underneath via a culvert. This road branches off a more well-used route through the village of Plainsfield, 2 miles south of Nether Stowey on the A39. Past the parking place the road starts to climb the slopes on the north side of the combe, towards Triscombe Stone, while the walk along the valley floor (Cockercombe Bottom) is along an unpaved track which soon branches off, passes a secluded house then enters the plantation, staying close to the stream. The trees are initially conifers, before a sizeable patch of beech, extending up the northern slopes, and then conifers once more. 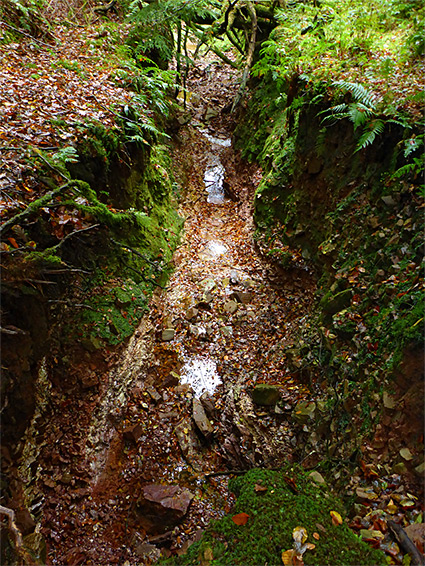 The wide track gains height slowly, continuing up the valley (now known as Two Tree Bottom), curving round to the south, and, after several other intersections, reaches a T-junction, from where the right-hand track leaves the stream, ascends the slope more steeply, and meets the road shortly before Triscombe Stone. The other track swings round back east, while a faint path continues directly beside the stream, also climbing quite steeply, to its source in a short enclosed, ravine through red rocks, from the Trentishoe Member of the Hangman Sandstone Formation, above which is a short stretch of usually dry streambed that extends right to the main Quantocks ridgeline, and meets the old drove road. Following this west then north reaches Triscombe Stone in half a mile. The road is lined by large beach trees and runs partly through woods, in other places alongside open heath, which affords good views to the west, across Crowcombe valley towards Exmoor. 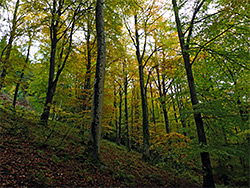 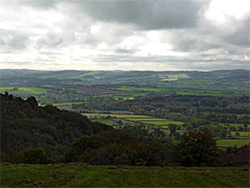 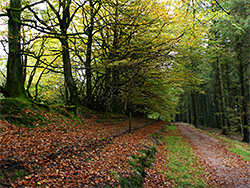 There are three possible return routes from Triscombe Stone to the lower parking place; shortest (1.7 miles) is to walk back all along the road. One alternative (2.7 miles) is to go just a short distance down this road then turn left along a forest track, follow this through the rather featureless trees of Great Wood, all conifers, for 0.5 miles, turn right on another wide track and descend into Keeper's Combe, eventually leaving the woodland and following a public footpath across a field, through a patch of trees and down a short lane to the road to Cockercombe. A third option, also 2.7 miles, is via another path branching south a little way before Keeper's Combe and staying on the higher ground, following a sloping ridgeline down to the edge of the conifers and meeting the other route in the patch of trees. 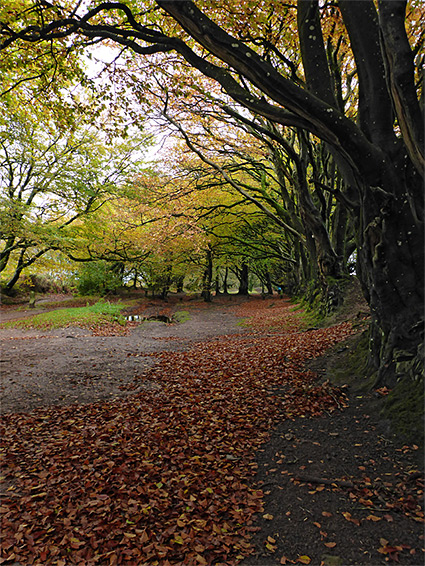