Barry to Aberthaw, Vale of Glamorgan 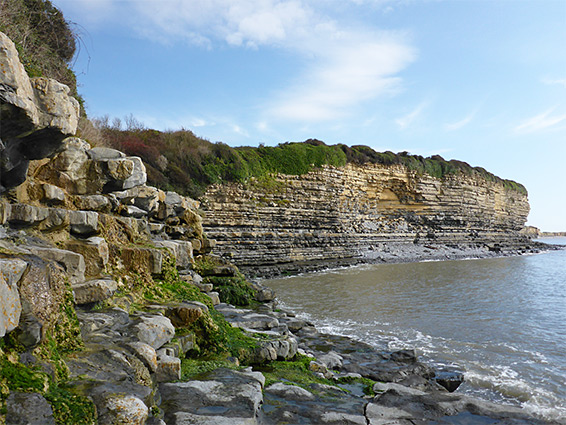 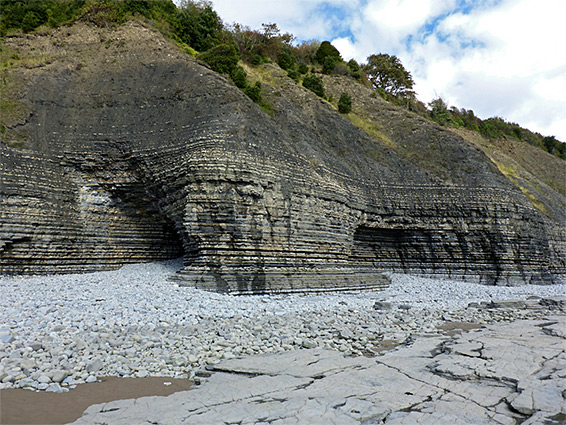 Five mile stretch of the Glamorgan coast; long cliffs of thin-layered limestone, above pebble beaches and flat terraces. Explorable via the coast path or walking at sea level

The Glamorgan Heritage Coast stretches 14 miles from Ogmore-on-Sea east to St Athan, near Aberthaw Power Station, and is characterised by thin-layered cliffs and gently sloping terraces of bluish-yellow limestone strata. Around Aberthaw the cliffs recede and the coast is instead lined by sand, mud or pebble beaches, but the limestone rises up again a short distance east, and the cliffs continue another 5 miles to Barry.

This part of the shoreline is not quite as spectacular as the Heritage Coast to the west since the cliffs are generally lower and the rocks less varied in form, but the scenery is still impressive, and as usual can be explored either via the coast path above, or, at low tide, by walking along the terraces and beaches below the cliffs. The ten mile round trip, out one way and back the other, takes four hours or more.

Unlike most parts of the Vale of Glamorgan coast, a walk along this section does not readily link up with the continuation to the west (Aberthaw to Stout Bay), since the path diverts a long way inland to avoid the power station. Walking at sea level is possible, however, the only obstacle being the channel of the River Thaw (just east of the power station) since this is quite shallow, at least at low tide.

Besides the scenic views and rock formations, there are three other points of specific interest along the coast; the site of a Roman Camp (The Bulwarks), the southernmost place in Wales (Rhoose Point) and a sizeable area of marsh, scrub and grassland beside the mouth of the River Thaw, protected as Aberthaw Nature Reserve. 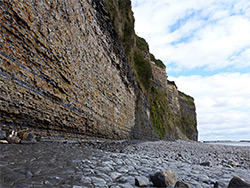 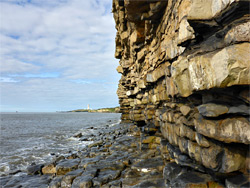 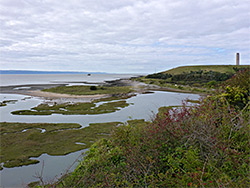 The walk from Barry to Aberthaw starts on the west side of town at Pebble Beach, a half mile long stretch of light grey pebbles. Free parking is available on the adjacent road, Knap Terrace, right beside the beach and at the foot of a steep grassy slope, which rises gradually higher to the west. The coast path runs above the slope through a grassy field, on the upper edge of which is a row of houses, along Marine Drive. A belt of woodland mostly hides the sea from the path, which progresses to the far end of the field and enters the more extensive trees of Cliff Wood, before descending a flight of steps (the 'golden stairs') to a flat marshy area at the lower end of a small stream, Whitelands Brook, which flows into another wide pebble beach accessed by a path through the adjacent Porthkerry County Park, parking for which is half mile inland.

Gap in the cliffs at Rhoose Point

The coast path crosses the grassy area, runs along the beach margin for a while before re-entering wooded surroundings, and climbing to a tree-lined field, site of the Roman camp known as the Bulwarks. There are no visible remains here, the only surviving structures being a series of embankments around three sides, though all are obscured by trees. The path leads through another belt of trees, and for the next half mile runs through Porthkerry Leisure Park, exiting the far side to a patch of scrub bordering an old quarry ('The Dams') then moves back close to the coast, and over another field, with more houses just inland. This field gives way to a bigger undeveloped area, formerly the site of the Rhoose Cement Works, now a mix of overgrown spoil heaps, old quarry faces, one large pool and several smaller ponds. The trail continues along a narrow ridge with drop-offs on both sides, south to the beach and north to the pool, then on to Rhoose Point, the southernmost place in Wales, marked by a slate obelisk and stone circle. Beside the obelisk are two gaps in the short line of cliffs on the seaward side, allowing an easy walk down to the beach. Both are artificial breaches, created during the quarrying. 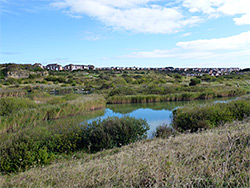 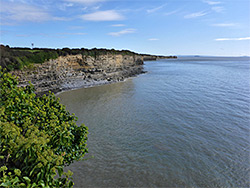 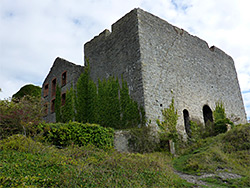 The next section of the path passes more flooded excavations and rough grassland then several fields, all the while running right at the edge of the long line of low cliffs bordering the rocky beaches below, generally inaccessible from above, until a short descent, over a tiny stream and into another leisure park (Fontygary), continuing alongside the southernmost row of caravans. On the far side the path reaches an overlook (Andrew's Point) and briefly comes close to a railway before descending to a flat area of mud, pools, saltmarsh and scrub, the Aberthaw Nature Reserve. To the south is a broad band of pebbles, Watch House Beach. The path bends inland, over a wall and through more trees to the substantial ruins of the Aberthaw Lime Works, a stone and brick building that was constructed in the late 19th century and abandoned in 1928. It was recently stabilised, and is now considered an important relic of the industrial era. From here the coast path heads further north through wooded ground and ends at a road in the village of East Aberthaw, from where it is 2.4 miles by road from its resumption, on the west side of Aberthaw Power Station. 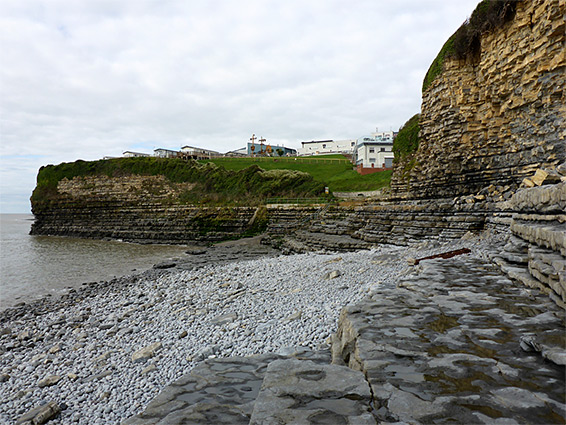 East of the overgrown flats of Aberthaw Nature Reserve, the pebble beach extends up to 1000 feet out to sea at low tide, but narrows quite abruptly further east to a minor promontory, Watch House Point, which is passable from below for only an hour or so either side of low tide. This is the only potentially difficult obstacle at beach level, as in all other places from here to Barry the intertidal zone is relatively wide. The beaches soon become rockier beyond the point, the pebbles and mud replaced by wave-cut terraces, which are more prominent once beyond the stones of Font-y-Gary Cove, just below the east end of the leisure park, from which access is by a short line of steps. The terraces extend to and beyond Rhoose Point, becoming gradually more impressive, and cliffs higher. 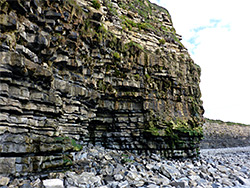 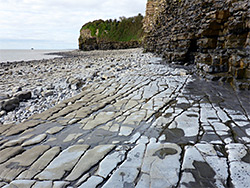 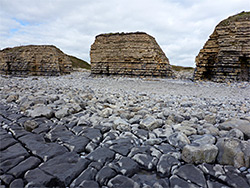 Gaps in the cliffs

A short distance east of Rhoose Point is Dams Bay, opposite the old quarry beside Porthkerry Leisure Park; the flat quarry floor may reached by climbing about 15 feet, up a ledgy cliff - a sheltered location, good for wildflowers. The beaches and terraces remain cliff-bound for nearly a mile further east, beneath the Bulwarks camp, and near here they rise to their highest extent, over 100 feet - completely sheer, with one particularly extensive area of exposed rock formed of several hundred thin, horizontal strata, grey or orange brown; one of the most impressive seas cliffs in Glamorgan. Round the next corner the land drops down quite quickly to the woodland and grassy flats around Porthkerry Country Park. Between here and Pebble Beach near Barry are one last short section of cliffs, also photogenic, in particular a thin-layered protruding formation known as Devil's Chair, above a series of wave-cut terraces with deep channels between them, the Bullcliff Rocks. 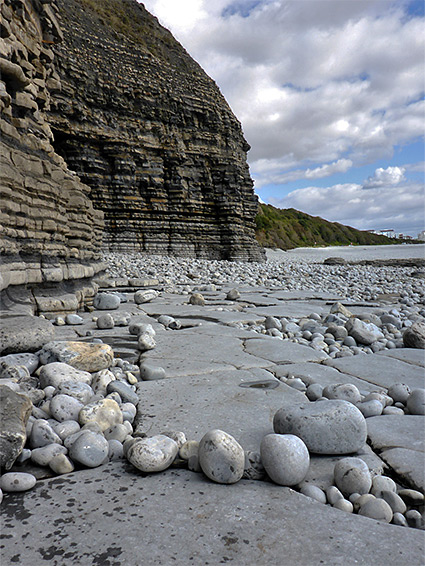