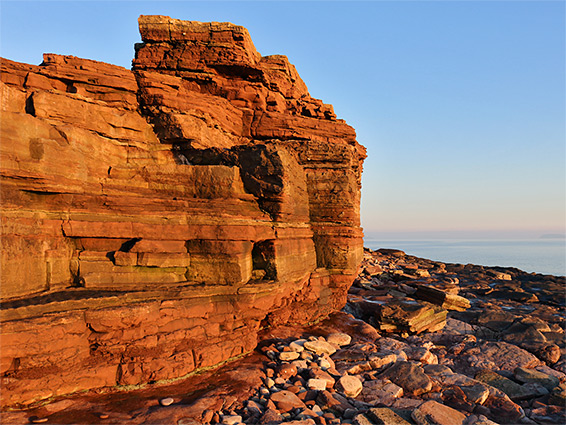 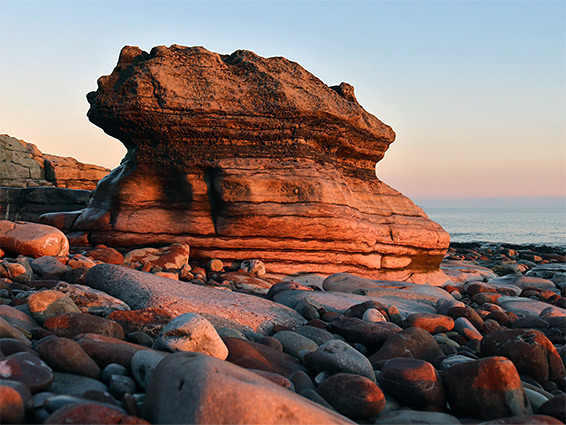 Parking
The south end of Burnham Avenue in Sully; CF64 5SU
Walk
1.8 miles, or 2.5 miles if starting from Swanbridge, the next access point to the east
Photo Tour (27 images)

The two miles between Sully and the harbour at Barry is a relatively unremarkable section of the Vale of Glamorgan coastline, characterised by pebble or rock beaches up to 900 feet wide at low tide, with only occasional patches of sand or mud. For most of this stretch, all along the broad expanse of Sully Bay, the shoreline is quite flat, and the coast path runs just a few feet above the beach, but low cliffs rise up further west, beyond the minor headland of Hayes Point, and here scenery is more photogenic, especially at sunset, when the grey-brown strata take on a rich, reddish hue.

The cliffs extend for half a mile, up to the mouth of Cadoxton Brook, beyond which is an embankment forming the eastern breakwater of Barry Harbour. On the east side of the stream is a sizeable intertidal terrace, Black Rocks, the lower section known as Bendrick Rock, or The Bendricks, and this is notable for several series of fossilised dinosaur footprints, though these are not always easy to locate and it is the layered red rocks that provide the main reason to visit. All are from the Mercia Mudstone Group, a mix of sandstone, clay and siltstone from the Triassic period, which continues west a little way beyond Barry before being replaced by the bluish-grey carboniferous limestone that forms the majority of the Glamorgan coast. Because of the well-presented exposures, and the dinosaur trackways, this section of the coast is protected, as the Hayes Point to Bendrick Rock Site of Special Scientific Interest (SSSI).

A path runs right along the upper margin of the beach between Sully and Cadoxton Brook, and further east towards Swanbridge and Sully Island; it is accessible from several places inland, the most popular, with beachside parking, at the end of Burnham Avenue in Sully. Swanbridge also has a free car park, while the west end of this section of the coast, in the vicinity of Bendrick Rock, can be reached from an industrial estate at the end of Hayes Road - an incongruous group of unattractive warehouses, bordering the most scenic, red rock section. Between here and Sully are two other large buildings, Hayes Point Apartments and Ty Hafan Children's Hospice; only for a short distance is the land bordering the beaches undeveloped. 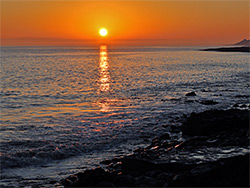 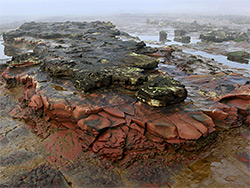 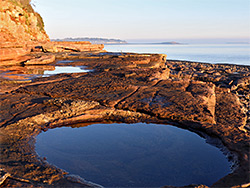 Sully Bay is 1.5 miles wide and not particularly photogenic since it has no cliffs and is lined only by flat, broken strata, partly covered with pebbles, with broad, seaweed-covered terraces and mud patches in the intertidal zone. The westwards coast path from Swanbridge runs alongside a field then past the gardens of a row of houses to the parking place at the end of Burnham Avenue in Sully, followed by another line of houses and then a narrow, wooded corridor, up to another vehicular access point, a carpark at the end of a short side street off Hayes Road. The line of trees continues between the path and the stony beach, and the scenery remains similar further west as the trail runs past the patch of overgrown land and then the gardens of the hospice and the apartments, before emerging to an open area at Hayes Point, where the mudstone changes colour from grey to predominantly red, and low cliffs rise up, the highest only around 20 feet, but quite pretty, formed of many thin horizontal layers. 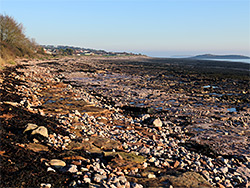 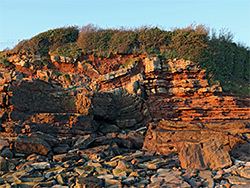 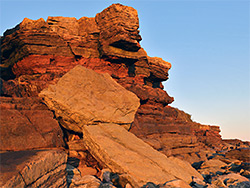 From the point, a low escarpment extends eastwards out to sea and also has some photogenic, thin-layered, red-grey formations, exposed at low tide, while in the other direction, level ledges and terraces allow easy walking below or above the cliffs. The rocks are interrupted by a narrow sandy bay at one point, with an old concrete slipway just beyond, linked by a short path to the road through the industrial estate, then further west are the extensive tidal terraces around Bendrick Rock. The west edge of the rocks is cut by an excavated channel at the mouth of Cadoxton Brock, which was diverted here when Barry Harbour was constructed in the late 19th century. The channel is too deep to cross, though land on the far side is private, part of the docks at the harbour, so can't be explored any further. The best of the dinosaur footprints are on the rocks immediately west of the spillway, and are also only seen around low tide. 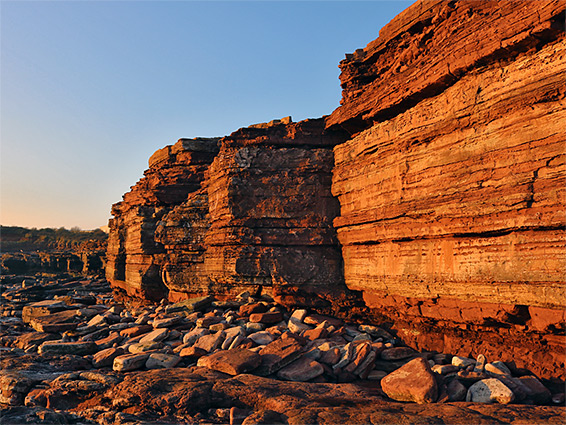