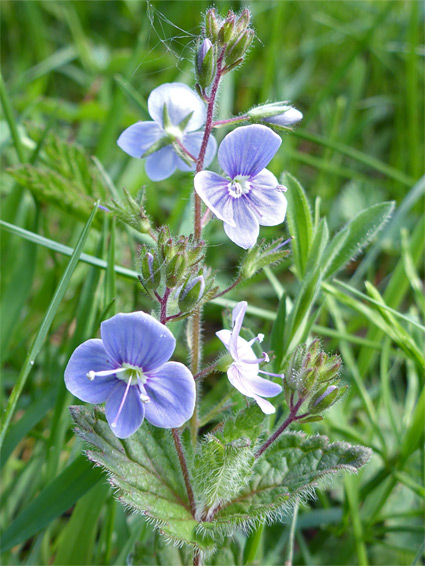 Veronica chamaedrys (germander speedwell), Lower Woods, Gloucestershire
Common name:
Germander speedwell
Family:
Plantain (Plantaginaceae)
Scientific name:
Veronica chamaedrys
Main flower color:
Blue
Range:
All across the UK except the northern Scottish Highlands
Height:
Up to 20 cm
Habitat:
Open woodland, grassland, roadsides
Flowers:
The corolla is four-lobed, white at the centre, with a purple border, otherwise blue, crossed by a few darker veins. Corolla lobes are somewhat asymmetric, with one smaller than the other three. The calyx is divided nearly to the base into four narrow, pointed lobes. Flowers are produced in elongated clusters, either one or two per leaf node. Stems are lined with long white hairs, which are arranged in two opposite rows towards the lower part of the stem, and more evenly covered higher up
Leaves:
Opposite, ovate, up to 25 mm long, lined by rounded teeth, hairy underneath and along the margins, crossed by palmate veins, and generally stalkless
Season:
April to June
Rarity:
★★★★★ 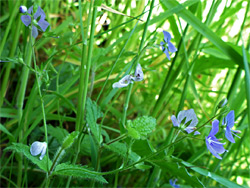 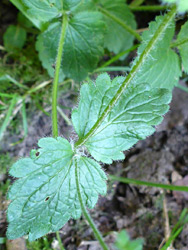 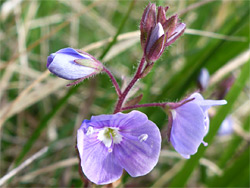 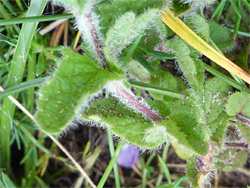 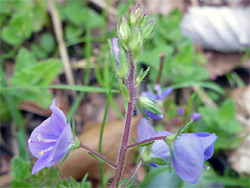 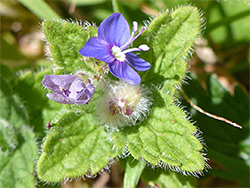