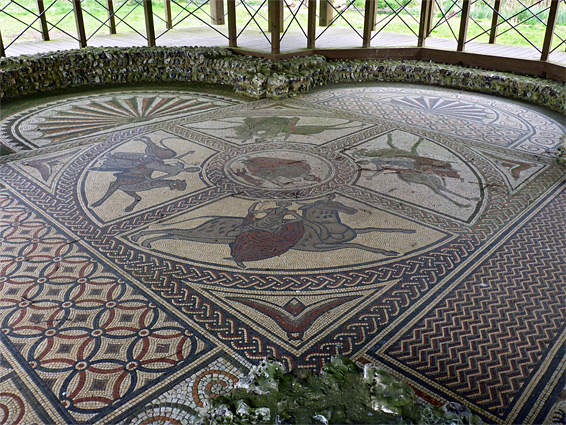 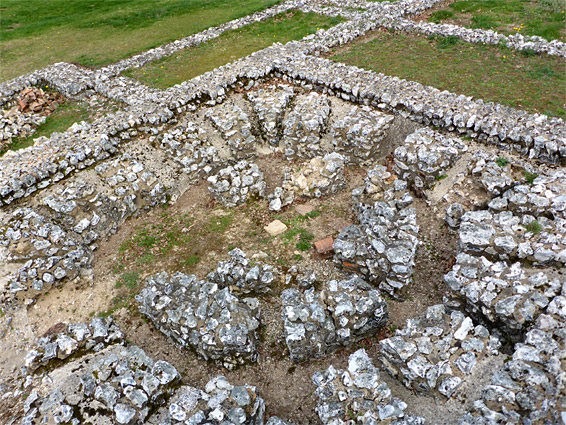 Foundations of an extravagant Roman settlement beside the River Kennet near Hungerford, including one of the finest mosaic floors in the country

In a peaceful setting beside the River Kennet in Wiltshire are found the remains of one of the largest Roman villas in Britain, established around AD 60 and reaching a peak of development some 300 years later after construction of a grand hall with an unusual three-apse design (triconch), and a beautiful mosaic floor, amongst the finest in the country.

Littlecote Roman Villa (a modern name) did not survive much longer, however, since the gradual isolation of Britain from the rest of the Roman empire led to a steady decline, and the villa was abandoned sometime in the fifth century, at the start of the Dark Ages, and subsequently lost to history, until 1727 when the mosaic floor was rediscovered and some of the buildings revealed. But knowledge of the villa was short-lived, and after the site was reburied, the settlement was once again lost until 1976. Since then the villa has been fully excavated and its mosaic restored, and is open to the public free of charge.

Despite its grandeur, the villa is not so well known, perhaps due to its relatively recent (re)discovery - it is not marked on older maps, though some do indicate the site of the discovery of the tessellated pavement at a location 1,000 feet west, thought to be a deliberate error, by instruction of the landowner, to prevent unwanted attention surrounding the actual site. 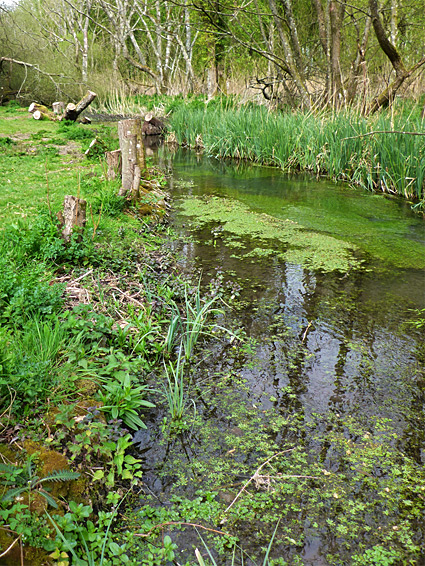 River Kennet
The villa was built along a Roman road, between Calleva (Silchester) and Cunetio (near Mildenhall) - either the main road or a spur, and its initial purpose was to guard a crossing point along the River Kennet. The site now is part of the Littlecote Estate, which is centred on a manor house built in the 16th century, now occupied by a hotel after being sold in 1985 by the then owners, the Wills family. Entry to the Roman site is free and the place is open all year, in daylight hours, reached by a short road through the estate grounds, entrance to which is just north of Littlecote village, on minor roads 3 miles northwest of Hungerford. 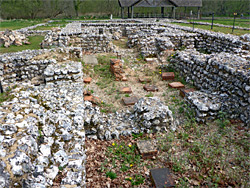 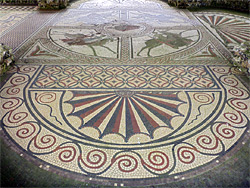 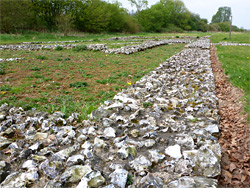 The final layout of the villa was that of the quadrangle - a large open rectangular area at the centre, with ranges of buildings on all four sides. The first structure, the guardhouse at the river crossing, was small, and only in use for a few decades. The site was taken over by the local population, perhaps by a single (wealthy) family, who built various wooden buildings including a barn containing a corn dryer, subsequently part of the north range. The first stone (flint) building appeared around AD 170 and was later incorporated into the west range, and augmented during the following century including addition of a hypocaust (underfloor heating system) around 220 AD. Other buildings were added, in the west and south ranges, then around 270 AD the west range was completely replaced, with a larger building of two stories including two towers, and furnished with mosaic floors. The quadrangle was completed by the east range around 300 AD, and various other alterations followed, culminating in 360 AD with the grand hall at the northwest corner, this is reflecting a change of use of the complex, from residential/agricultural, to ceremonial. At its peak the villa had about 60 rooms including five towers and an imposing gatehouse, suggested to be the grandest in the country. 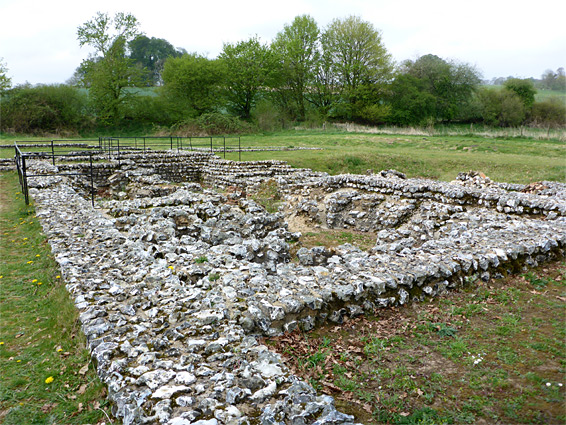 As the Romans withdrew from Britain, some parts of the villa were demolished and eventually all was abandoned. Discovery of 8th century pottery suggests that Anglo-Saxons resided here for a while, then a small village with wooden buildings developed in the 11th or 12th centuries, active for over 200 years but then removed during construction of the nearby Littlecote House (an earlier version of the current building), to make way for a hunting park. At the end of the 17th century, part of the Roman foundations were incorporated into a hunting lodge and it was when digging in the garden of the lodge that the steward, William George, uncovered the mosaic floor of the ceremonial hall, five feet below the surface. The whole building was excavated, and the mosaic recorded before being reburied, the land planted with oak trees, and its exact location was soon declared to be unknown; the ordnance survey map recorded the site of the mosaic to be several hundred yards to the west. Not until 1976, following research by two local archaeologists, was the correct location established. Full excavation followed, of the whole site, including restoration of the mosaic - since only about 40% was intact, rather less than in 1727, when it is thought that at least part was deliberately removed, however contemporary drawings made at this time enabled the restoration to be quite accurate. 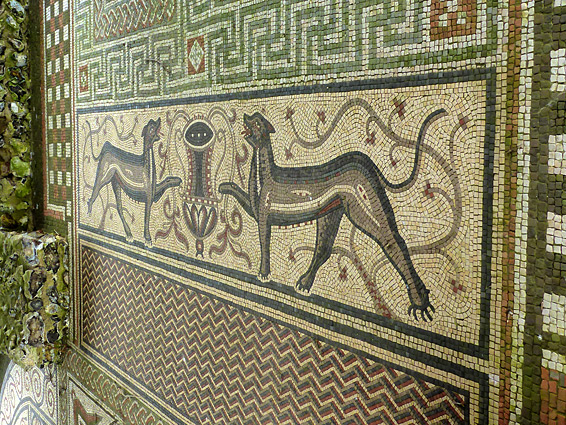 The road to the villa, across the estate grounds, has a parking place for visitors, who approach the site from the east. The foundations, after excavation, represent the villa as it was around 360 AD, near the peak of its development. The east range consists of the gatehouse with entrance passageway, originally flanked by two towers, and a long stable block. The south range contains some domestic rooms and the bathhouse, the main bath and the usual subsidiary rooms including caldarium and frigidarium. The west range is the largest and most complex; the main centre of the villa, and also the section subject to the most rebuilding phases, making the foundations hard to interpret. The hypocaust floor of the third century is clearly visible, along with many walls. The north range consists of a large barn-like building, subsequently converted to a courtyard, and the great temple or hall, at the southwest corner, containing the famous mosaic floor. All this is at the west end of the north range; there were no buildings further east since the land was too close to the river. The mosaic floor is protected by a wooden canopy, and it may be viewed from all sides. The mosaic is centred upon a depiction of Orpheus, Greek prophet and ruler; worship of Orpheus, together with that Bacchus, another Greek god, became fashionable in some parts of Britain at the start of the fourth century, when the Roman influence was waning. 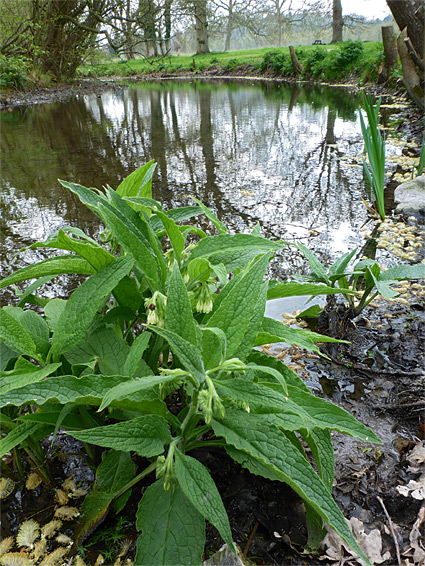