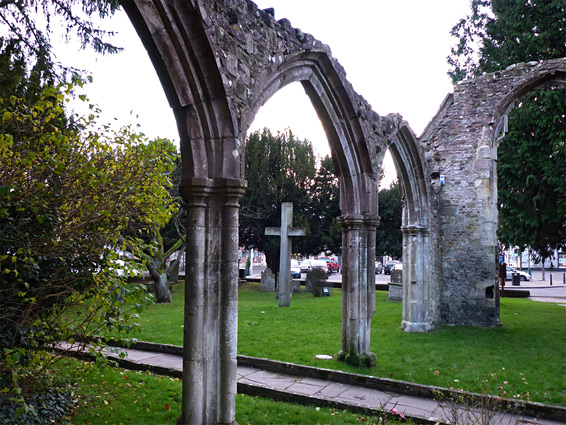 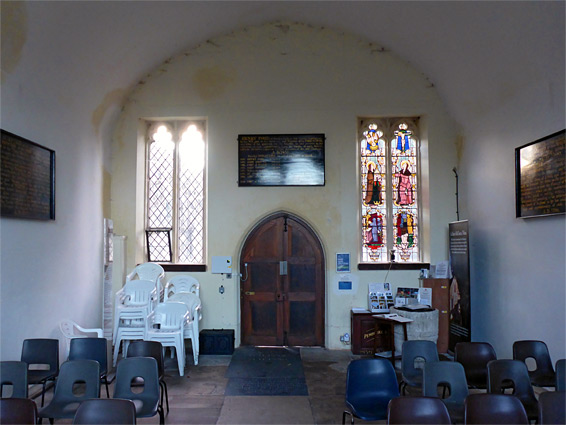 Victorian chapel occupying the chancel of a medieval church, adjacent to the ruins of the original nave

Three miles west of Salisbury, the town of Wilton contains an Italianate-style parish church, dedicated to St Mary and St Nicholas, built relatively recently (1845), and also the smaller, much older St Mary's Church, from the 15th century. This latter is no longer used for daily worship, managed instead by the Churches Conservation Trust, and is notable for its partially ruinous state, since much of the original building was dismantled soon after the completion of the larger replacement, leaving only the chancel and one bay of the nave intact, but retaining some of the arches along the remainder of the nave. Although somewhat artificial, left in this state on purpose, the structure now has the appearance of an ancient monastic ruin, the picturesque aspect of which is just slightly spoilt by the surrounding modern developments, as the church lies right at the centre of town, beside a car park and shopping street.

The first religious building on the site was erected in Saxon times, and was later associated with a Benedictine monastery. Robert de Bingham, Bishop of Salisbury, was consecrated here in 1229, since the cathedral he was later to manage was still under construction. Wilton parish was enlarged in the 15th century after combining with several smaller neighbouring parishes, necessitating enlargement and rebuilding of St Mary's, a process probably complete around 1441 since records show purchase of a new bell in this year, and the new church was in regular use for 400 years. After opening of the Church of St Mary and St Nicholas, several objects were transferred from the previous building including bells and memorials, and most of the structure was removed. A small chapel was created in the old chancel, retaining a few late medieval features including two blocked arches, formerly part of the nave. Restorations were carried out in the 1930s by Robert Bingham, US ambassador, supposedly a descendant of the 13th century bishop. 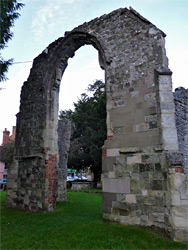 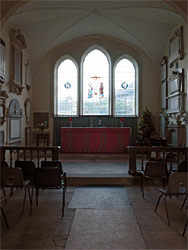 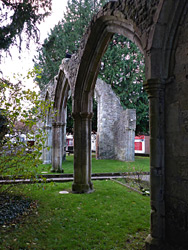 East end of the nave 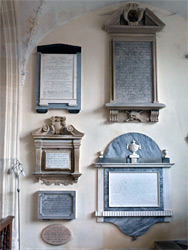 St Mary's Church is centrally located in Wilton, on the north side of the old market place, an area now mostly used for parking, though it also contains the lower section of an ancient town cross. The church is partly surrounded by a small graveyard containing a few large trees; it consists of the intact section to the east and the ruins of the nave to the west - three broad arches from the south aisle, a larger arch at the west end, once adjoining a tower (though moved from its original location), and the base of two columns from the north aisle. The chapel is usually open during the day though may sometimes be locked; inside are a few rows of chairs, a small altar below a three-light window, a selection of memorials along the walls (the oldest form Thomas Mell, died 1625), and a Norman font, brought here from a disused church in Dorset, all beneath a simple, partially vaulted, mid 18th century ceiling. 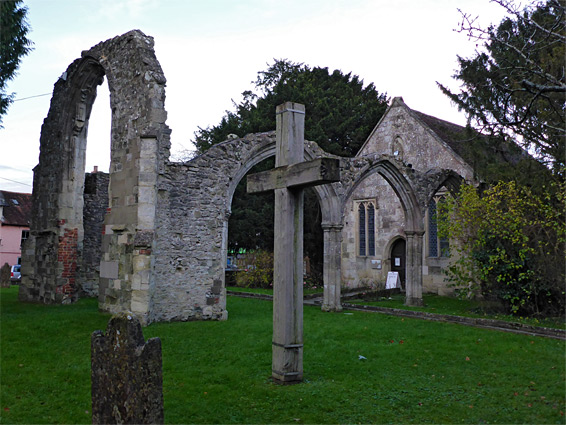