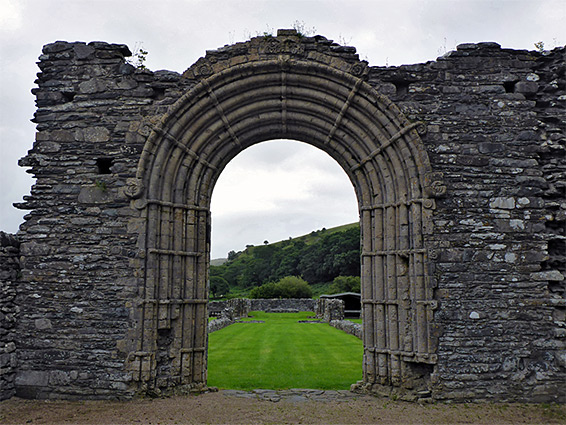 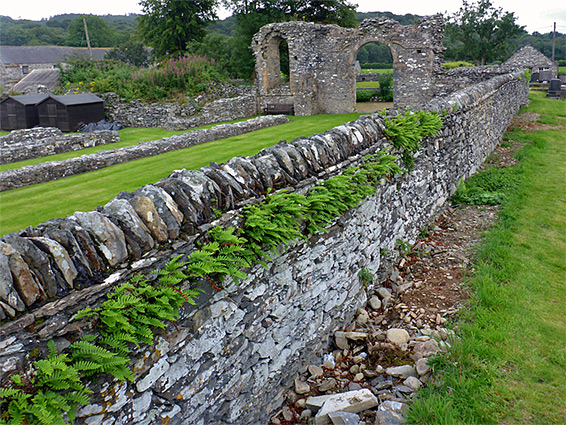 Picturesque ruins of a major medieval monastery, in a quiet, rural setting; mostly just low walls and column bases, but including a fine, ornate doorway

Once the second most prestigious monastery in Wales (after St Davids), Strata Florida Abbey suffered the same fate as so many other Catholic institutions, abruptly closed by order of Henry VIII in 1539, then swiftly demolished, the stone from the walls and lead from the roof reused for other building projects. Only a few sections of the abbey church survive, much less than some others in wales like Tintern and Neath, yet the remains are still photogenic and evocative, especially the west wall, which is centred on a beautiful, ornate arched doorway. The other walls rise to heights of four feet or less along the majority of the structure, and just a few fragments of the original tiled floor are visible, in chapels along the transepts.

The abbey was founded in 1164 by Robert fitz Stephen, a Norman soldier, and soon came under the patronage of Rhys ap Gruffydd, ruler of the kingdom of Deheubarth, which occupied all of southwest Wales, and it has a remote, rural location in the hamlet of Ystrad Fflur, at the foot of the Cambrian Mountains near the River Teifi. To one side of the ruins is an ancient house, partially incorporating the former refectory and dormitory, while in the other direction the outer wall adjoins the graveyard of the current parish church, also partially built using stones from the abbey.

The hills to the east provide a scenic backdrop to the ruins, which are not often visited due to their out-of-the-way location. The site is relatively small, and all can be seen in half an hour or so, including a tour of a small museum. Other attractions in the area included the Teifi Pools and Cors Caron National Nature Reserve. 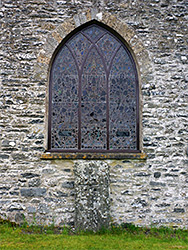 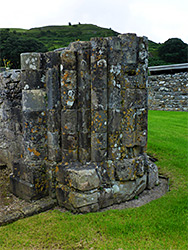 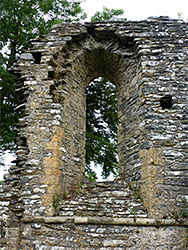 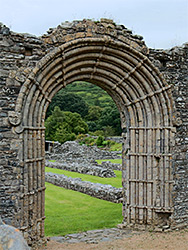 The tiny settlement of Ystrad Fflur is one mile from the larger village of Pontrhydfendigaid, on flat land at the foot of a steep slope to the east, and between two waterways, the Afon Teifi and the smaller Nant Glasffrwd. Parking is available along the roadside in front of the entrance building, sometimes unstaffed in which case admission is free. Once through a gate, the path leads through the ornate, arched, recessed doorway, the most substantial remnant - the main entrance to the abbey church, at the west end of the nave. The opening is lined by five concentric fluted columns, crossed by lateral ribs terminating in spiral bosses, and the enclosing walls also incorporate a fine lancet window, at the end of the south aisle. 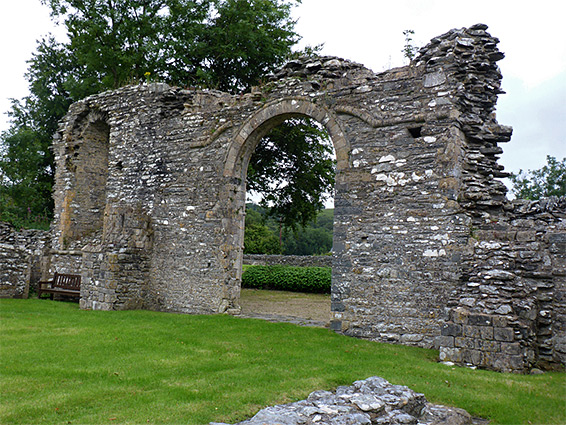 Interior of the west wall

The remainder of the walls are just a few feet high, all below window level, but sufficient to clearly outline the remainder of the church, which had north and south aisles, north and south transepts each with three chapels along the east wall, and the presbytery at the far end. Tiled floors survive in the three south transept chapels, and are protected by wooden ceilings. The walls of the north aisle and north transept have been reinforced and now serve as a boundary between the abbey and the graveyard of the parish church. Also evident, to the south, are parts of the cloisters and the chapter house, this separated from south transept by a narrow corridor. The west range is mostly obscured by other development while the stone farmhouse to the south incorporates the former refectory. The earliest components are the walls of the transepts and the choir, built in the 1260s, with the nave added over the next couple of decades. One other relic of note, set below the east wall of the parish church, is a stone grave marker or pillarstone, inscribed with cross and five indentations, and dating from the 10th century, indicating in the presence of a burial ground at this site prior to the foundation of the monastery. 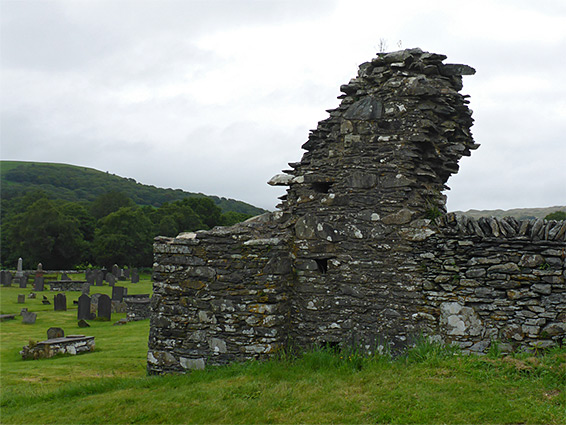 The initial location of the Strata Florida monastery, a Cistercian institution, was nearly 2 miles southwest beside a different river, the Afon Fflur, from which the place was named; Strata Florida, a latin phrase, means 'valley of flowers' (Ystrad Fflur in Welsh). It relocated after a few years and was initially occupied by monks from Whitland Abbey in Carmarthenshire, 50 miles southwest. The original site is known as Hen Fynachlog, beside Old Abbey Farm along the main road south of Pontrhydfendigaid. The church and the subsidiary buildings were largely complete by 1201, and the monastery soon became a major centre, for both religious activities and local governance, by the ruling house of Deheubarth; at least a dozen princes from this family were buried here, including Gruffydd ap Rhys II (died 1201), son of the founder. At its peak the monastic grounds covered 100 acres, incorporating all the land between the two rivers and the edge of the hills, and about a third of this was enclosed by a defensive wall, complete with several gatehouses. The abbey was captured by Henry IV in 1401, following the rebellion led by Owain Glyndwr, and was used as a base for further actions over the next 14 years until returned to the Cistercians once the insurgency was finally ended. The subsequent years were relatively uneventful, up to the 1539 closure, and once the buildings were dismantled the remains were left undisturbed for several centuries, gradually deteriorating further and becoming overgrown until clearance and stabilisation in the late 19th century. The site was declared a Scheduled Ancient Monument in 1919. 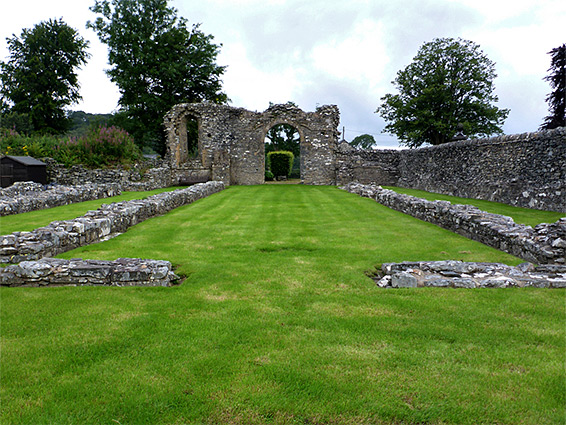