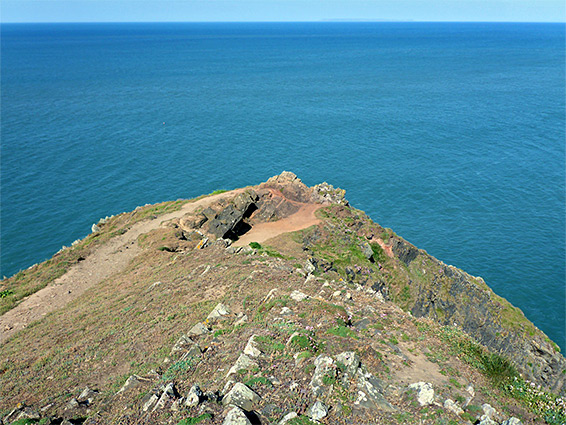 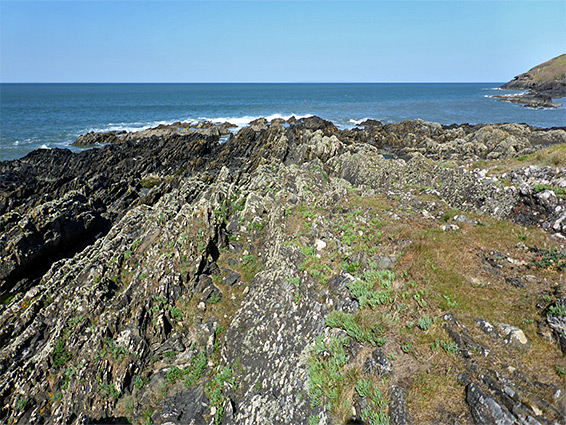 Cliff-lined headland with some rocky terraces; interesting geology and varied wildflowers. The coast path loops around three sides, mostly high above the sea

Baggy Point is a headland along the northwest Devon coast, between two sandy beaches, Croyde Bay to the south and the much larger Putsborough Sand/Woolacombe Sand to the north. The land projects seawards by over a mile; a flat-topped promontory around 300 feet high, mostly lined by steep cliffs, with only a few routes down to the shoreline. On the south side a good amount of rocky terraces are exposed at low tide, while to the west and north the land slopes more precipitously, resulting in only a narrow band of rocks, and these are generally out-of-sight from the coast path above.

The top of the promontory is smooth and grassy, with farm fields in the interior and meadows around the edge, without any rocky exposures, and the whole place is rather less scenic than Morte Point a few miles north, since this has a much greater variety of formations, and several beautiful, hidden sandy beaches.

Baggy Point has been owned by the National Trust since 1939, when the land was donated by local residents, and is also part of a Site of Special Scientific Interest, both because of the geology, which includes raised beaches and erratic boulders, and also the varied plant life, inhabiting heath and neutral grassland. Notable wildflowers include musk mallow, sea stock, autumn squill and hairy bird's-foot trefoil.

The point is served by a National Trust car park near the end of a narrow road on the south side, in the village of Croyde Bay, and its perimeter is followed by the coast path, a distance of 2.6 miles. Three loop hikes can be made by using connecting routes across the middle of the promontory, with round-trip distances of 2.6, 3.6 and 4.5 miles. 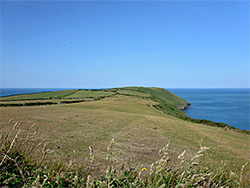 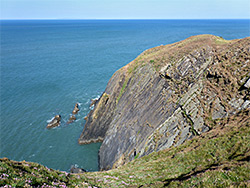 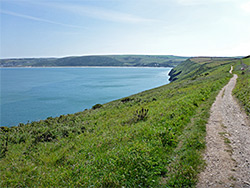 The walking route starts by following the road a short distance beyond the car park, veering left at a junction then left again soon after, now along a track, which passes the last of several spectacular cliff-side houses then narrows to a path. This passes through a little patch of trees with a stream and a small pond then continues, staying close to the inter-tidal rocks for a few hundred feet, past several climb down places, before starting to ascend as the cliffs become higher and more vertical, and the rocks below largely hidden from view. The trail reaches the actual Baggy Point, the westernmost tip of the peninsula, bordered to the south by a huge, slanted cliff; a short spur path leads to the far side, to a viewpoint about 100 feet above sea. The hazy island of Lundy can be seen, 17 miles due west. 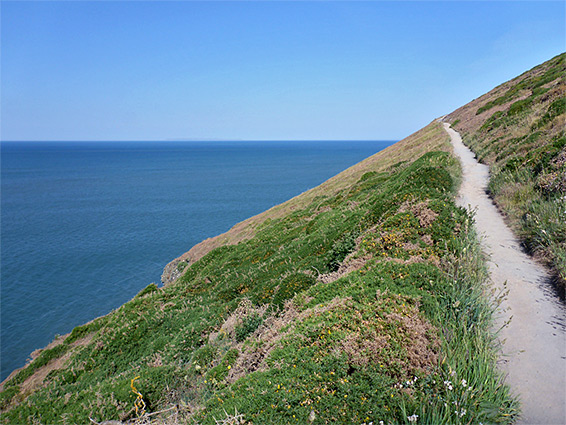 The path next heads north, climbing further and moving further away from the cliff edge, then bends east, following walls, fences or hedges that mark the boundary of the fields that occupy the middle part of the headland. The scenery stays similar all the way along the north side, with bracken and gorse-covered hillsides sloping steeply down to the unseen rocks below, until the path descends gradually and meets a road, leading to Putsborough Sand. Four sections of the coast are named - Cox Cliff, Bloodhill Cliff, Ramson Cliff and Napp Cliff, all similar in appearance. In general the rocks are rather dull in colour, grey or brownish, and not especially photogenic.

The return route, for the 4.5 mile option, is across a lengthy field, along a farm track then through a shady gully which contains a spring and a stream, and finally down another farm track to the road in Croyde Bay, meeting this 0.2 miles east of the parking place. The medium length loop cuts-off the easternmost section by a short walk over a field, while the shortest loop is via another path across fields than an ascent of a small summit (Middleborough Hill), before returning directly to the car park. 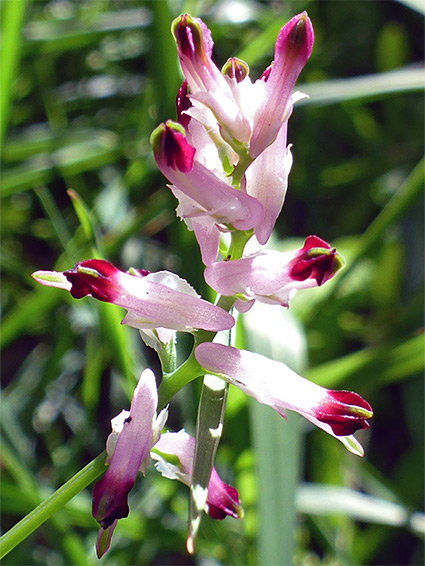