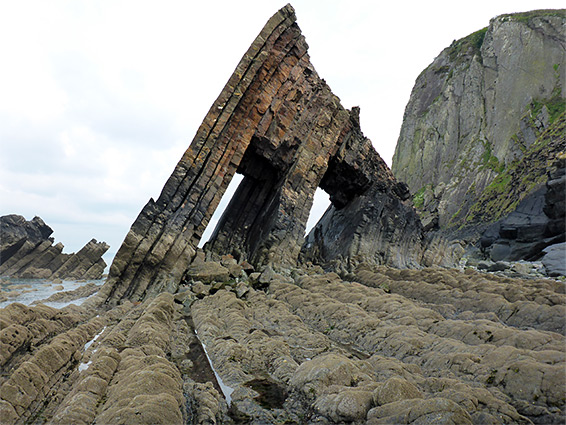 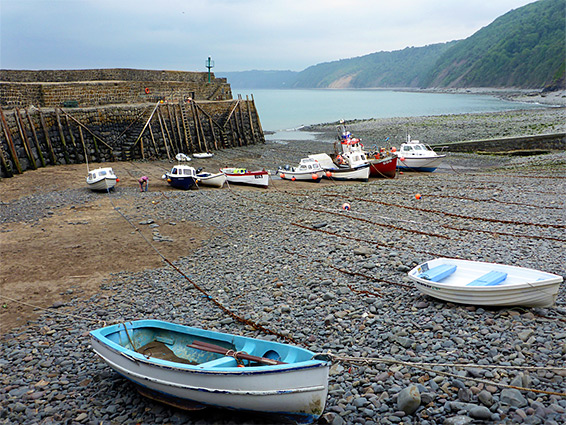 The two miles between Mouthmill Beach and Clovelly is typical of the northwest Devon coast, mostly cliff-bound, the land rising up to 300 feet above the sea, with narrow beaches below, nearly all covered with rocks, boulders and sea stacks. All rocks are thin-layered sandstone, from the Crackington Formation, often angled, folded and eroded into a multitude of forms, the most spectacular example being Blackchurch Rock, an isolated triangular outcrop with two rectangular passages through the centre. As well as this jagged double arch, the beach is also notable for the picturesque stone ruins of Mouth Mill, built alongside a stream that flows down a tree-lined valley, while 2 miles east, Clovelly, meanwhile, is well known as a perfect example of a traditional seaside fishing village; it has a steep, cobbled, vehicle-free main street leading to a sheltered harbour lined with historic houses.

At low tide, walking between the two locations is certainly possible, however nearly all the intertidal zone is covered by big boulders, making for very slow progress. The coast path is much easier, steep only at the west end, otherwise fairly level, traversing ancient oak woodland with frequent views of the rocks and cliffs below.

A loop of 5.5 miles can be made by returning via an inland route, over fields and through woods along the valley that leads to Mouthmill Beach. The start point is a National Trust car park at Brownsham, the closest place with the road access to Mouthmill Beach. The walk could also begin at Clovelly though parking here is limited and expensive - Ł8.25 per adult, since it includes the admission charge to the (privately owned) village. 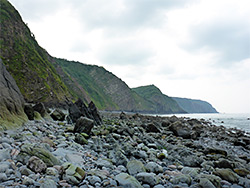 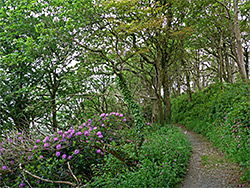 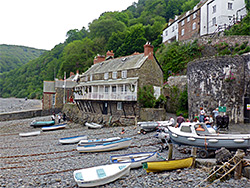 The Brownsham National Trust car park has space for around 20 vehicles, and no fees are charged. It is 2.3 miles from Hartland and 2.7 miles from the A39. The only facility in the village is a tearoom at Lower Brownsham Farm. One of several walking routes to the coast starts on the north side of the car park, following a hedgerow across a field and down into woodland (Beckland Wood) containing a stream, then turning right (northeast), traversing the slopes above the valley floor before rising a little, leaving the trees and crossing four fields, heading due east, re-entering woods in the vicinity of Mouthmill, and descending to sea level via several switchbacks. 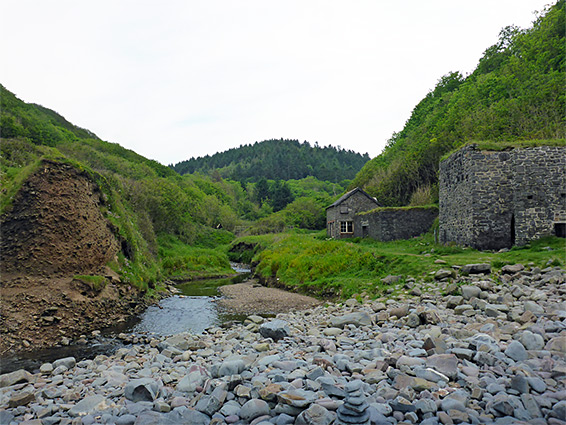 Stream flowing into the stony beach at Mouthmill

The path emerges into the open at the east end of Mouthmill Beach, where a stream meets the sea. On the west side are two stone buildings, a limekiln and a two-story cabin, associated with the mill, the main structure from which, a little way up the valley, has been converted to a house. The beach, like all of the coast hereabouts, is strewn with big grey boulders, lacking any sand, and is not particularly scenic, though the lower end of the valley is certainly photogenic. Blackchurch Rock, isolated at high tide, easily reachable at other times, lies 300 feet from the mouth of the valley, and looks very impressive from all angles, as does an extravagantly curved block of sandstone strata just opposite. Beyond, around a headland, is a narrower but similar looking beach extending a quarter of a mile to the next minor promontory. 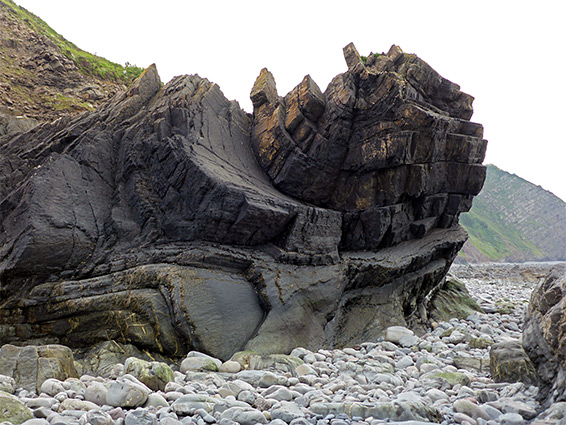 From the beach, the eastwards coast path follows an old vehicle track, climbing through a patch of scrub in amongst which are several clumps of bastard balm, an uncommon wildflower, and rising further into oak woodland, crossing a steep, overgrown area known as The Wilderness. The path leaves the track after a quarter of a mile and soon reaches the brink of the cliffs, at a viewpoint looking towards Blackchurch Rock. Another path forks off, running back northwest along on the cliff edge to another overlook, but this is currently closed due to a landslip. In the other direction, the path continues through woods for a while then crosses a patch of heath, on a high point named Gallantry Bower, site of a Bronze Age burial mound. It goes back into woods on the far side and the surroundings are then little changing for the next mile to Clovelly - the trees are all oak, mixed with non-native rhododendrons, the elevation stays fairly level at around 300 feet, and gaps in the trees allow good views over the sea. One feature of note is a wooden pagoda, known as the Angel's Wings, constructed in 1826 by Sir James Hamlyn-Williams, owner of the adjacent Clovelly Court estate. 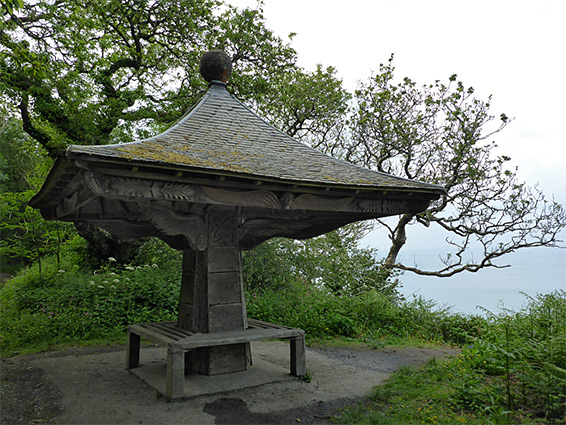 As it approaches Clovelly from the west, the coast path curves away from the edge of the cliffs and meets the one road down to the village, which is open just to residents, and leads only to the harbour - the main (pedestrian) street is accessed from above by another route. The path resumes after a short distance south and stays quite far above the sea, while the road provides a walking route down to Clovelly, without need for payment, as the entrance fees to the village are only charged if parking. The road ends the front of the Red Lion pub; a covered passageway leads to the harbour, lifeboat station and some houses, while the other buildings, on the famous cobbled street, are just beyond. 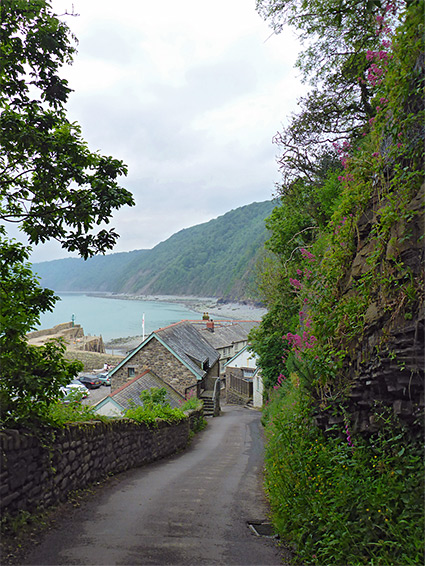 Rhododendrons above the steep road to Clovelly

The return route starts from where the coast path meets the road to Clovelly - another path parallels the road inland, through a patch of woodland associated with the Clovelly Court estate, planted with several non-native species including giant rhubarb, then rejoins the road. The walk continues along the pavement for a short distance, down the entrance driveway of the estate, left in front of the main dwelling house, through a farm and across a field, now on a footpath, which next runs alongside a patch of trees, diagonally across a second field and into more woods, in the valley of the stream to Mouthmill Beach. The path descends and meets a track used for forestry operations; this crosses the stream and follows one of the upper branches of the valley westwards through Brownsham Wood, and eventually back to Brownsham village.