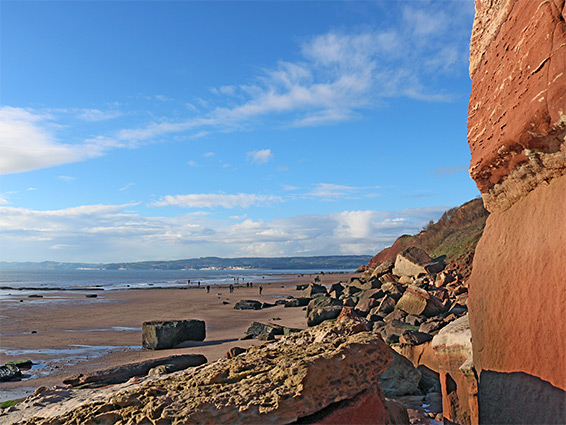 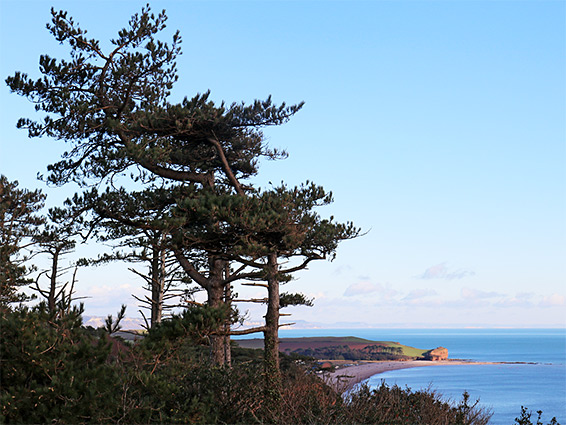 The westernmost four miles of the Jurassic Coast; richly-coloured red cliffs and sand/pebble beaches, explorable from the coast path or by walking at sea level

The westernmost section of the Jurassic Coast is the four miles between Exmouth and Budleigh Salterton in south Devon, the actual terminus marked by a slender pyramidal obelisk, or geoneedle, atop Orcombe Point, this the first location where the sedimentary strata are properly exposed. The rocks at the point are sandstone of the Exmouth Formation, deep red in colour, as is the case for all of the cliffs from here, 15 miles east towards Branscombe, where they are replaced by white chalk.

Orcombe Point rises above the east end of the sandy beach at Exmouth, beyond which is a wider beach a similar length (Sandy Bay), leading to Straight Point, a much larger promontory, approximately halfway to Budleigh Salterton. In contrast to the wide, easily accessed and so often very popular bay, the cliff-lined coast east of Straight Point is very rarely explored since there is no official access anywhere near the headland, not until the cliffs drop down approaching Budleigh Salterton, though all the sea level features can be still explored, either by walking west from this town, or via an overgrown, disused route at the point, accessible only around low tide. This does therefore allow a loop walk between the two towns, of 8 miles round-trip (as described below) - out along the beaches and back via the coast path above the cliffs.

The only shoreline section completely out of bounds is around Straight Point itself, this partly due to some permanently submerged cliffs and also because all of the land on the point is used by the Royal Marines, as a firing range. So from Exmouth the outwards journey along the beach requires use of a short section of the coast path, to cross the point. The shoreline walk is passable for all but one or two hours either side of high tide, the only other minor obstacle being a narrower strip of sand below Orcombe Point. 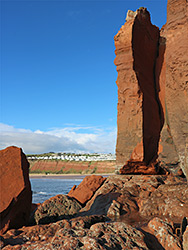 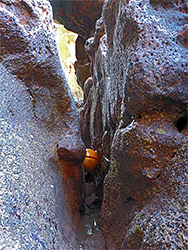 Buoy in a crevice 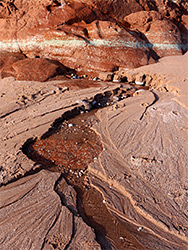 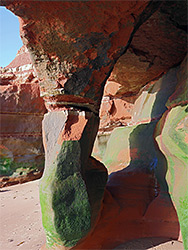 Free parking is available along Marine Drive in Exmouth, a dead-end road overlooking the east end of the local beach - constructed in the early 20th century, prior to which the land was largely undeveloped, and used as a rifle range. The beach ends beneath a low red cliff, which curves around a minor commentary (Rodney Point), and onto the more prominent Orcombe Point, where the coast bends to the east. Steps once allowed access up to the points from the beach but they were washed away some time ago. The sandstone persists a short distance past the point, incorporating a sheltered bay containing a seaweed-covered arch, and is then replaced by the mudstone component of the Exmouth Formation, similar in colour but more thin-layered and rather less stable. The mudstone forms cliffs of increasing height, up to 200 feet around a location known as the High Land of Orcombe, then slopes down gradually towards Straight Point. The beach is up to 400 feet wide at low tide, mostly red sand with just a few rock outcrops. Fallen boulders at the base of the cliffs - either red or greenish-grey - show fine examples of tafoni, a small-scale potmarked surface texture caused by weathering. 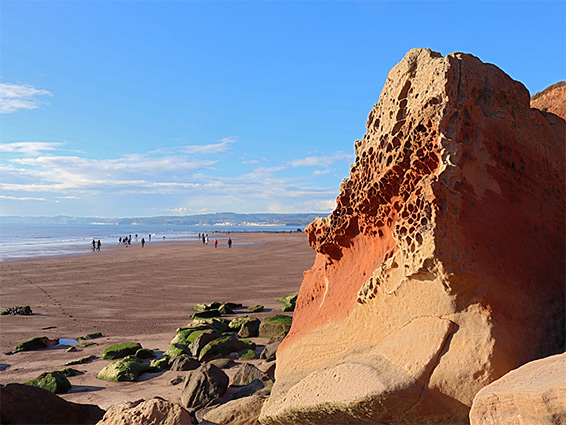 The firing range on Straight Point was established in the 1950s and occupies all of the land on top, and the danger area extends over a mile out to sea on the east side, where the firing takes place. The cliffs to the west are still partially accessible from below, for about 1,000 feet, nearly to the southern tip, until reaching a point with deep water even at low tide. All of the point is formed of the Exmouth Formation sandstone, mixed with some breccia; opposite the end of the beach it forms ledges and low cliffs, then curves around a point with some taller cliffs to a boulder-strewn bay, followed by a narrow channel between a cliff and a large arch, the span of which nicely frames the view to the west, towards Dawlish. Around here, the furthest location easily reachable, are a variety of photogenic formations and sandstone textures. 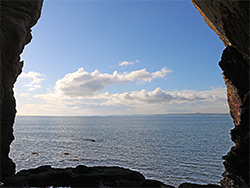 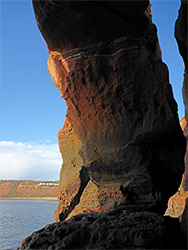 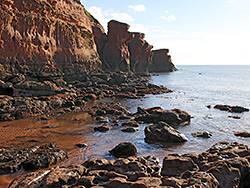 Sea level on the east side of Straight Point is reachable by walking along the coast path for a third of mile, from the east end of Sandy Bay, past the entrance to the firing range then down a muddy field towards the far side of the numerous caravans of the Devon Cliffs Holiday Park. Just south of the furthest caravan is a fence ending at the rim of the cliffs at the edge of the point. A gap in the fence marks the start of a faint, little used path that initially leads back on the far side of the fence a short distance then enters an overgrown, rock-lined valley that descends towards the sea, ending above an 8 foot cliff below which (at low tide) are flat terraces. Steps once aided the descent but now a rope should be present. Walking south is not permitted as this enters the firing range danger zone, but to the north, a short walk across the terraces, past a sea cave and round a narrow point, leads to the sand/rock beach at Littleham Cove, beneath crumbling cliffs of Littleham Mudstone, and from here it is a straightforward walk of 2 miles to Budleigh Salterton. A few years ago the cove was also reachable by descending an unstable muddy slope starting at the edge of the caravan park, and also aided by a (longer) rope, but landslips have made this impassable. The only other potential route to the beach between Straight Point and Budleigh Salterton is a descent of another landslip zone, The Floors, about half a mile east of the cove, something not particularly recommended. 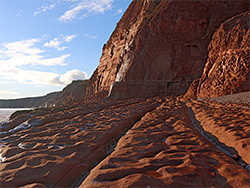 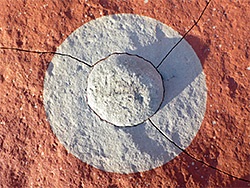 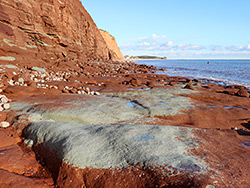 Littleham Cove, and the beach a mile or so to the east, is of geological interest due to numerous radioactive nodules, containing vanadium and uranium, which are embedded in the Littleham Mudstone. This is usually red but contains many green patches, either small, neat circles, larger irregular blotches or lengthy seams, all created by reduction, probably instigated by compaction. Some of the circular reduction spots contain the nodules, which are up to 15 cm in diameter. Radiation levels are comparatively low, about ten times background, but care is still needed if collecting them. Other features of interest include a few tiny streams, one forming a ten foot cascading waterfall, good examples of wave-cut terraces, and lots of deep red eroded rocks. Overall though, the scenery does not change much until nearing Budleigh Salterton, where the red sand is replaced by white pebbles, and the Littleham Mudstone by more homogenous cliffs of Otter Sandstone. The land slopes down quite sharply as the town approaches, allowing an easy connection to the coast path, though the red cliffs resume on the far side of town, just beyond the River Otter - see Budleigh Salterton to Ladram Bay. 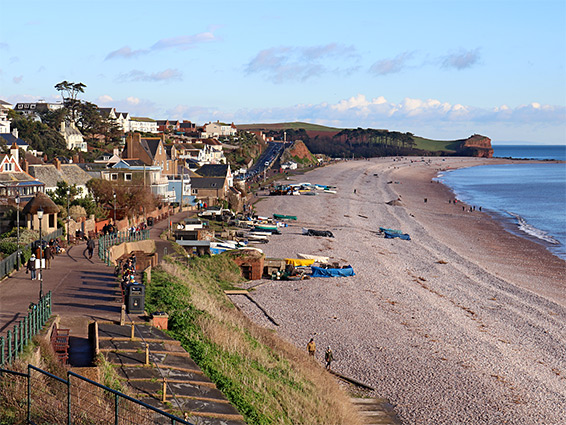 The westwards coast path from Budleigh Salterton, initially paved, rises gradually alongside a row of houses, through a patch of woodland, past the last two buildings and across a field, now mostly hidden from the sea by trees. It re-enters woodland, coming close to some more isolated houses and rises further up the eastern slopes of West Down, through scrub, gorse and ferns, with just a few isolated pines, which nicely frame the views to the east. The scrub is replaced by the fairways of the East Devon Golf Course, up to the high point (420 feet; West Down Beacon) and a junction with a connecting path inland. The main path then descends around the upper edge of The Floors, and the possible route down to the beaches, and continues a short distance, round a small valley, to the edge of the East Devon Holiday Park, now heading nearly south, below a lengthy line of caravans while staying close to the cliff rim. It cuts west, past the firing range to the steps accessing the east end of Sandy Bay. Next is another third of a mile beside the eastern section of the caravan park, and then five fields, the path initially rising gently to the High Land of Orcombe, before descending to the geoneedle at Orcombe Point, beyond which are the outskirts of Exmouth, and a link path down to the carpark on Marine Drive. 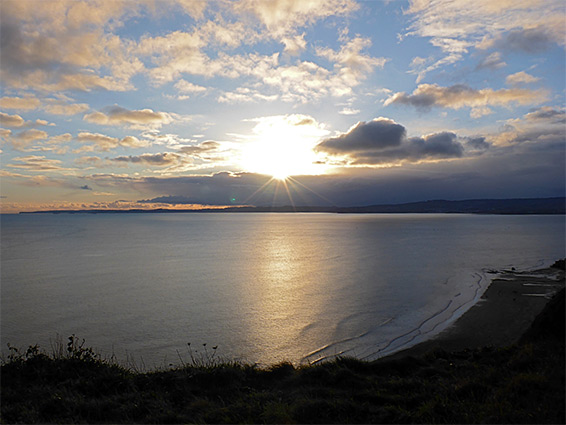