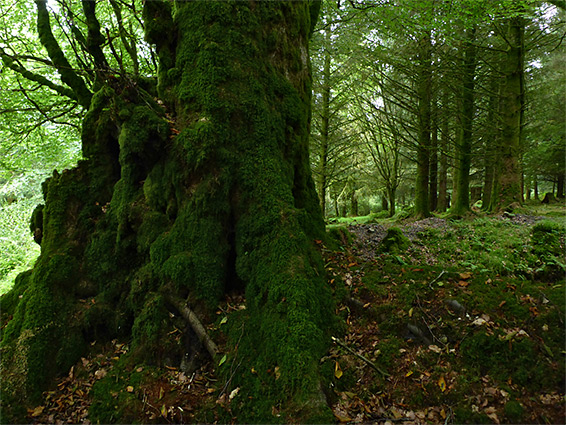 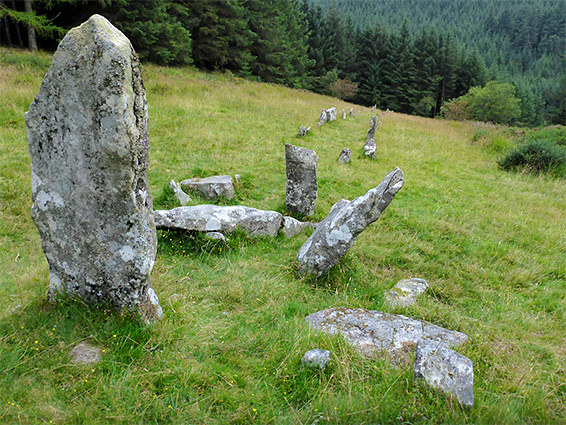 1940s conifer plantation near the northeast edge of Dartmoor, beside a reservoir; contains patches of heath, and also several ancient monuments including a stone circle and a stone row

Fernworthy was a remote farm near the upper end of the valley of the South Teign River, in the hills towards the northeast edge of Dartmoor, occupied for several centuries then abandoned around 1940 upon construction of a dam across the river to form Fernworthy Reservoir. Soon after, over two square miles of the adjacent moorland to the west was given over to a conifer plantation, currently containing trees of various ages but in most places giving the impression at least of a well-established forest, with copious amounts of ferns and mosses on the ground, and many species of fungi.

Fernworthy Forest is reached by only one road, a narrow lane a few miles southwest of Chagford, which runs close to the south shore of the reservoir and ends just beyond its western edge, while along the way are nine (gated) tracks leading into the plantation.

Besides walking through the woods, and picnicking by the reservoir, (no boating or swimming), this area is also of interest for several ancient sites, for most of their history set alone amidst the open moors, now in unplanted clearings in the trees; they comprise several cairns, over a dozen hut circles, a post-mediaeval farmstead, and, most impressive, Fernworthy Stone Circle and Assycombe Stone Row, both of which are semi-restored, with upright stones. The patches of grassland around the stones are good locations for heath-type wildflowers. 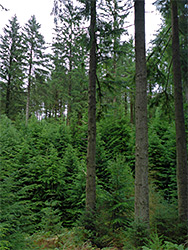 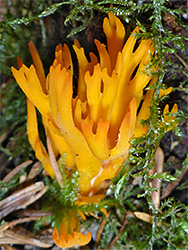 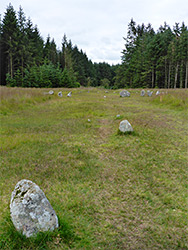 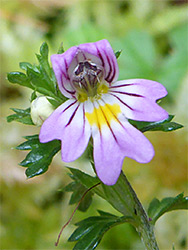 The approach road runs through picturesque farmland, climbing gradually, then through a gate and cattlegrid on to the moor, marked by a Dartmoor National Park sign. Keeping left at a junction, the road follows a line of trees and enters the plantation, soon arriving at the main parking area, near the reservoir. A path leads from here right along the shoreline northeastwards to the dam, and in the other direction it follows less close to the water, looping all around the reservoir for a circuit of 2.5 miles. After the parking area, the road continues 1.2 miles, bending further away from the reservoir in two places to cross streams, Lowton Brook and Assycombe Brook, and ending at a smaller parking place, 500 feet east of which are a few stone walls, remains of Fernworthy Farm. Vehicles may also be left at the entrance to the various forestry tracks, and all these intersect, allowing for many different loop hikes. 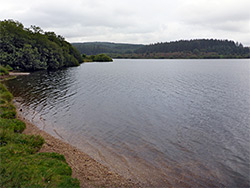 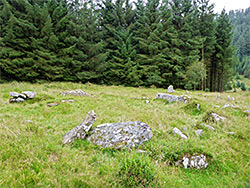 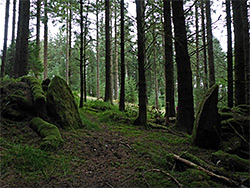 Fernworthy Stone Circle is reached by a walk of half a mile, along a westwards track from the parking place at the far end of the road, bearing left at one junction. The circle has 27 granite stones, projecting above ground by one or two feet, and they date from the Bronze Age, around 2000 BC. It sits towards the southern end of the 800 foot-long Fernworthy Stone Row, the stones of which are all lost or buried to the north, but several survive to the south. The surrounding area was once part of the plantation though has been cleared in recent years, giving the stones more prominence. 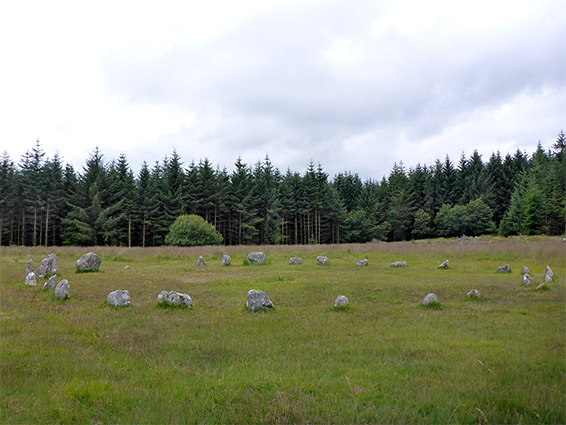 The 27 stones of Fernworthy Stone Circle

Assycombe Stone Row is situated on the east side of the low valley of Assycombe Brook, along a track that heads due south, beginning 0.85 miles from the reservoir car park. The track is enclosed by conifers for half mile then emerges into an open area, passing various stone ruins, on the east side - two hut circles, the foundations of a medieval settlement, and the rather higher walls from the post-medieval Assycombe Farmstead, then a little way beyond is the Bronze Age stone row, beginning 400 feet east of the track and extending uphill another 400 feet, in a clear corridor between the trees. The row is much more complete than that at Fernworthy, and has at its north end a set of larger stones centred on a menhir (a tall, upright stone, either solitary or the focal point of a group). Another hut circle is found close to the lower end of the row - 30 feet in diameter, containing around a dozen stones. 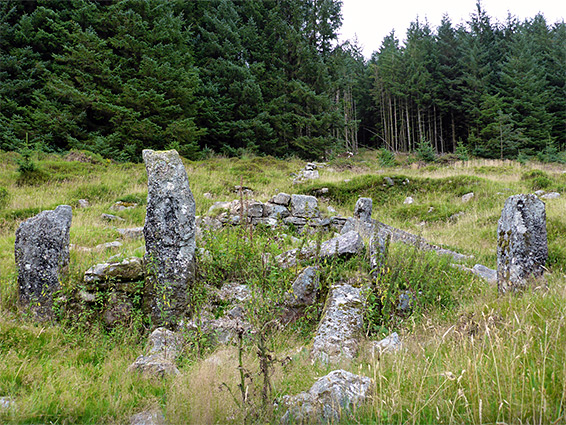