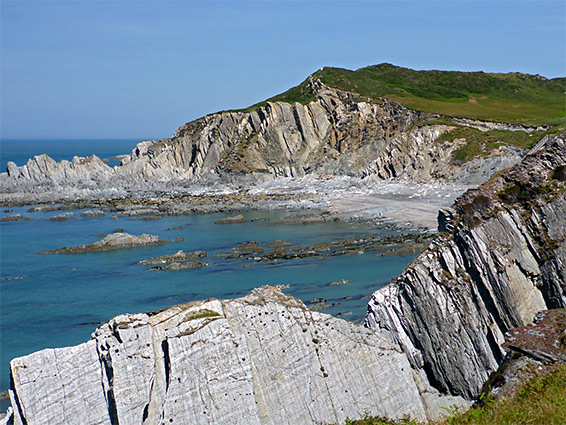 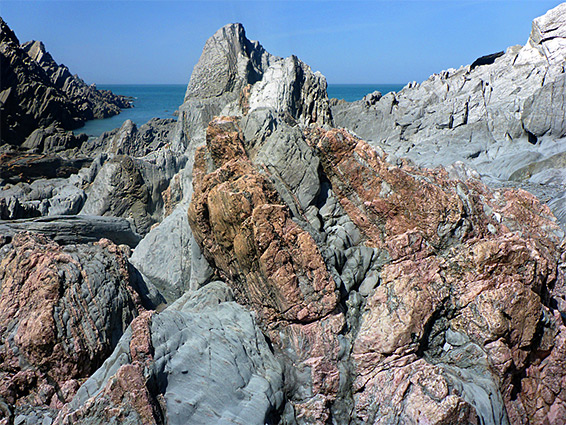 The rocks forming the northwestern tip of the Devon coastline, near Woolacombe, are from the Morte Slates Formation; thin-layered, light grey to silver-coloured strata inclined at a range of angles up to 90 degrees, and eroded into a great array of jagged shapes, creating some very spectacular scenery. The strata extend from the north end of Woolacombe Sands, northwards to Morte Point then east towards Ilfracombe, near which they are replaced by other slate formations that continue another four miles to Combe Martin, before giving way to higher, more homogenous cliffs of Old Red Sandstone.

The main section of the Morte Slates can be seen along a loop walk starting at the village of Mortehoe - out to Morte Point, along the coast to Bull Point then Lee Bay, returning via country lanes and footpaths - a six mile walk, of which four miles is along the coast. Several connecting routes allow for shorter loops.

The coast path hereabouts runs quite close to sea level, since there are no particularly high cliffs apart from one short stretch, approaching Lee Bay, where it rises to 200 feet, to cross a minor summit, Damagehue Cliff. Unlike some other parts of the Devon coast, however, it is not possible to walk very far at beach level owing to innumerable small, permanently flooded inlets and sheer-sided rock outcrops, but reaching the sea is easy in many places. The predominantly rocky coastline is interrupted by sandy coves and pebble beaches, and a long time could be spent exploring. Inland are patches of heath and coastal grassland, enlivened by many wildflowers in spring and summer. 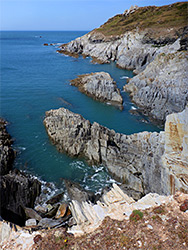 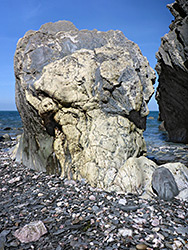 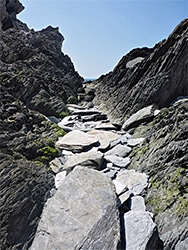 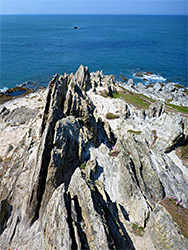 This section of the coast is managed by the National Trust, and a suitable starting point for the walk is the NT carpark in Mortehoe, just east of the village centre at the edge of a field. From the car park, the main road, the Esplanade, passes a selection of shops then descends, southwards, towards the coast. A path branches off, over sloping grassland and meets the main coast route just above Crunta Beach, a secluded patch of sand lined by dark grey cliffs, interspersed with many isolated rocks at low tide, and accessed by a flight of steps. The coast path then heads northwest for 0.8 miles to Morte Point, running above a line of rocks and little inlets, including two named features, Slipper Rock, a prominent ridge between two narrow pebble beaches, and Windy Cove, another pebble bay below a big cliff to the north. 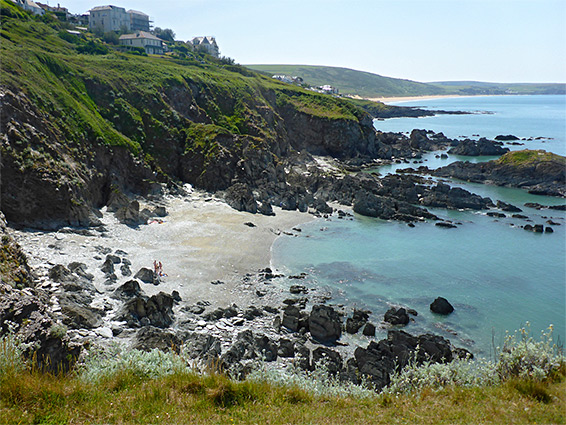 The path rises a little as it approaches Morte Point, above some taller cliffs, and reaches a fine viewpoint right at the tip of the promontory, amidst some particularly photogenic slate formations centred on a thin ridge that extends inland several hundred feet. The point is named for the many shipwrecks that occurred in the vicinity, often accompanied by loss of life. Beyond the viewpoint, the trail turns abruptly to the east, traversing grassy slopes, staying around 100 feet above sea level; the land slopes down fairly gently to a narrow band of pebbles and jagged slate. 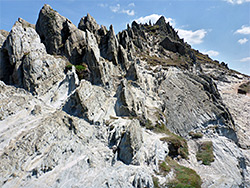 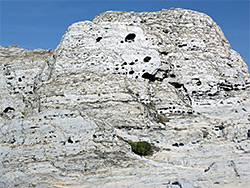 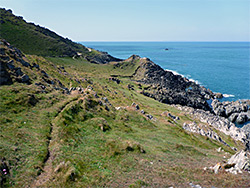 The path rises slightly and continues alongside a wider inter-tidal zone with a number of narrow inlets, including Whiting Cove and Oreweed Cove, then across an area of rough grassland with extensive bracken, and down towards another picturesque area, Rockham Beach, the centre of which is sandy, giving way to flat terraces to the south and a great array of jagged formations to the north. Here the generally whitish-grey slates are mixed in a few places with mineralized red-orange bands, adding to the interest. The stark, angular, silver-colored rocks are reminiscent, on a small scale, of a high elevation Alpine landscape in midsummer. At low tide it is possible to walk northwards from the beach, in places following confined passageways between steep-sided blocks of slate, and across other little patches of sand and pebbles, all very scenic. The cliffs and the rocks become gradually higher further north, eventually putting a stop to easy progress. 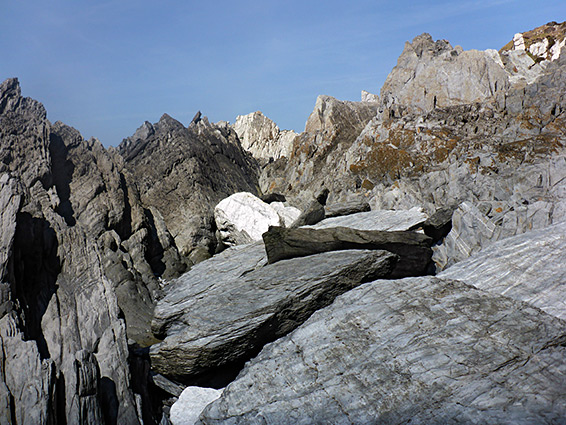 The northeastwards coast path from Rockham Beach proceeds across undulating terrain to the next major promontory, Bull Point, which overlooks another small, cliff-lined beach to the south, Dunn Sand. A 55 foot-high lighthouse was constructed on the point in 1879, and was maintained, staffed, until subsidence necessitated rebuilding the structure inland a short distance, and the replacement still operates today, now fully automated. The cottages from the original lighthouse building do survive, and are available for rent as holiday accommodation. The road to the lighthouse leads back to Mortehoe (one mile), so can be used to form a shorter loop. 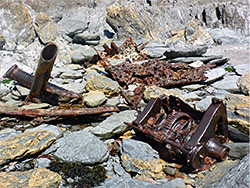 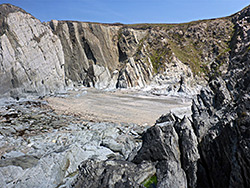 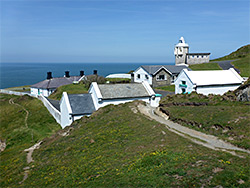 East of Bull Point, the coast path has some steeper sections, starting by rising further to a high point of 250 feet, then descending after half a mile to Bennett's Mouth, a narrow pebble beach at the north end of a grassy valley containing a small stream. It then climbs sharply once more to cross Damagehue Cliff, followed by an equally steep descent to the next little valley, Hilly Mouth, which may also contain flowing water, and on for a short distance over a patch of heath to the edge of the tiny settlement of Lee, where it meets a road. Most of the adjacent bay is rocky, the exception being a wide strip of sand on the west side known as Black Pit, reached by a steep stairway. Beside the path is a patch of wood vetch, an uncommon wildflower. A short distance west is Sandy Cove, a more secluded beach, reachable at low tide via narrow passageways though the slate that separates the bay from Black Pit, or by walking down from the coast path above - around the cove are more photogenic rock formations, similar to those at Rockham Beach. 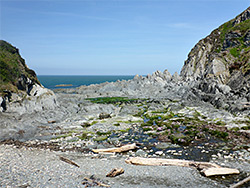 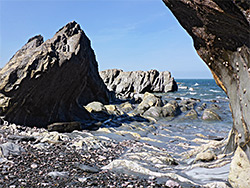 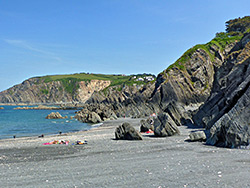 From Lee Bay it is 1.5 miles back to the car park at Mortehoe - along the road for half a mile, continuing straight on at a right-angle bend, down an old sunken lane then around the edges of two fields, across a wooded corridor that encloses the stream to Bennett's Mouth and finally up a slope on the far side to an intersection with the road to Bull Point Lighthouse, which is followed southwards back to the village. 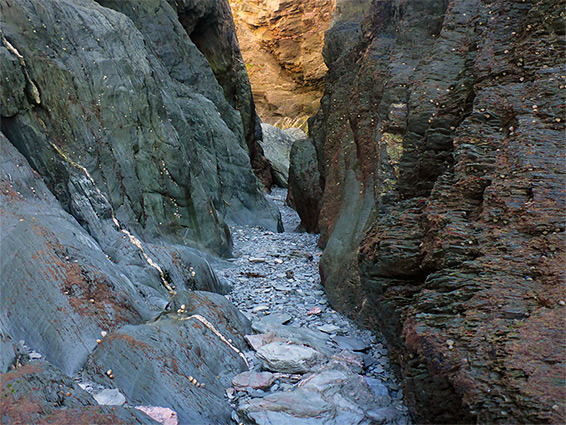