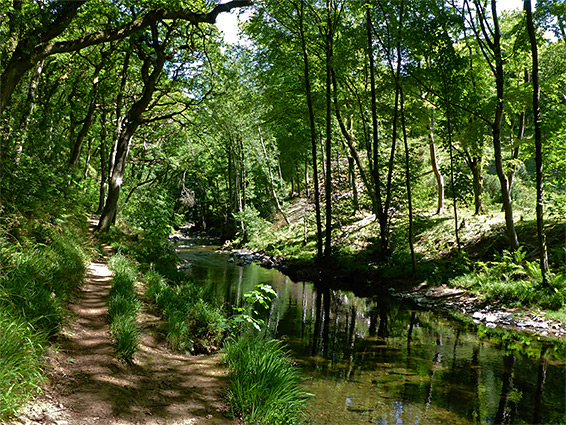 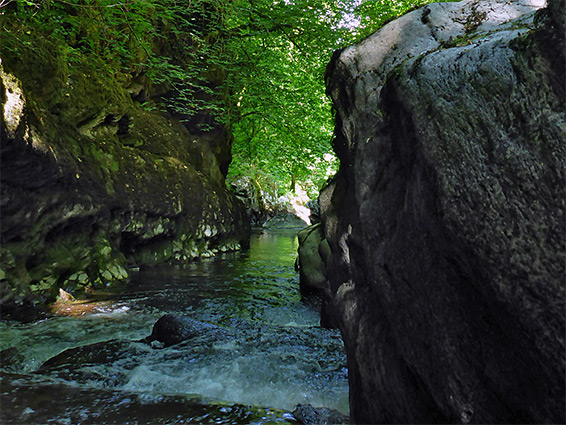 Confluence of Hoar Oak Water and the East Lyn River, both flowing through deep, rocky gorges with pools and cascades, below densely wooded slopes

Watersmeet in north Devon is the romantic name of the confluence of the East Lyn River with a major tributary, Hoar Oak Water, both drainages flowing through deep, steep-sided gorges through the hills on the north side of Exmoor; below the union, the East Lyn remains enclosed for 1.5 miles until the valley opens out abruptly at Lynmouth, on the coast.

The lower portion of the river is followed by the A39, as far as the confluence, and the main road continues up the valley of Hoar Oak Water, while a lesser road parallels the East Lyn further upstream, but in between are 1.5 miles of the river accessible only by paths; the most scenic, peaceful and photogenic section, including many little cascades and deep pools.

A good selection of trails explore the river valleys and the slopes above, 40 miles in total, but perhaps the best option (described below), visiting both valleys, is to start from Hillsford Bridge over Hoar Oak Water, walk downstream to Watersmeet, up the East Lyn for 1.5 miles until it comes close to the lesser road, and finally follow this back to the bridge. An alternative start point is a paid parking place in a layby on the A39 in the vicinity of the confluence, from where a short path descends to the river.

The surrounding rocks are mostly slate and sandstone from the Lynton Formation though the northernmost part of the East Lyn River cuts into the adjacent Old Red Sandstone. Both groups of strata form dark-coloured cliffs and terraces which together with the steep valley sides and the tall trees result in generally cool, shady and moist conditions all year. 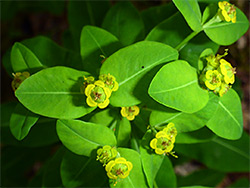 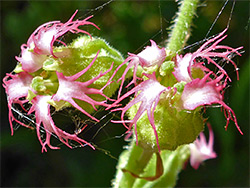 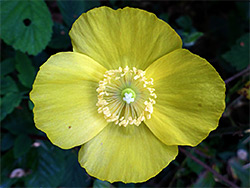 The Watersmeet loop walk starts from a (free) parking place overlooking Hoar Oak Water, along the A39 just north of the junction with the B3223 at Hillsford Bridge. The path alongside the stream follows the opposite (east) bank, signed Watersmeet 3/4 of a mile; through a gate, past a National Trust notice and beside the stream for short distance until the waters start to cut down into the bedrock, resulting in the trail becoming gradually higher above, traversing steep slopes through thick woodland. Wildflowers grow in the sunny corridor around the path, including Welsh poppy and willowherb. At one point a pool and slender waterfall can be seen, reached by scrambling down, though most of the stream remains out of sight until the path reaches a viewpoint on a narrow ridge, 100 feet above the confluence, Watersmeet. 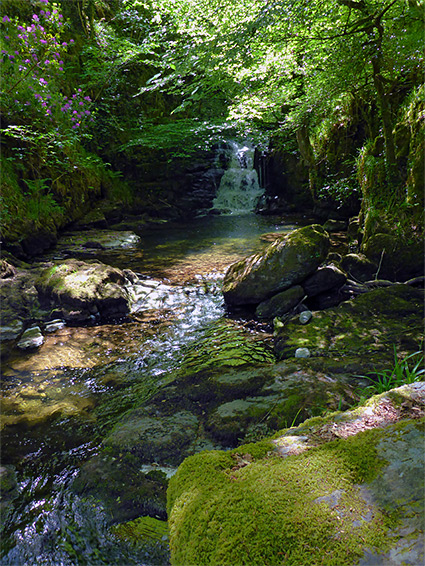 At the confluence viewpoint the path splits, one branch following the East Lyn River upstream, the other descending to water level, and a second junction - the left path bridges Hoar Oak Water and climbs to the paid parking place on the A39 while the other crosses to the north side of the East Lyn, to the garden of Watersmeet House, an elegant building constructed around 1832 as a hunting/fishing lodge for the Glenthorne Estate, owned by by Rev. Walter Stephenson Halliday. The house is now managed by the National Trust, serving as a cafe and gift shop, and is accessed by a narrow lane forking off the A39 a short distance north. The East Lyn River is relatively wide and not enclosed at this point but Hoar Oak Water is narrower, and just south of its footbridge forms a pretty, sheer-walled section leading to a deep pool and waterfall, viewable by carefully walking on flat terraces beside the stream. The river banks around the confluence were in Victorian times planted in with rhododendrons, brightening the greenery with their large purple flowers in the spring. 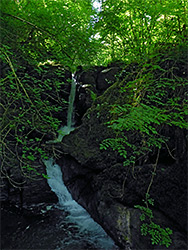 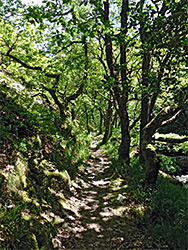 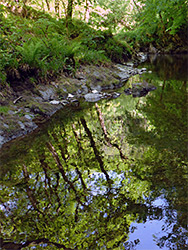 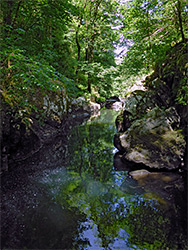 From Watersmeet House a path leads upriver, on the north bank, initially rising a little way above but then generally staying close to the water, which at one point flows either side of a tree-clad rock outcrop, forming an island, this on the outside of a tight bend. The path, now fairly level, proceeds across a couple of tributaries, round a wider bend and on to another junction, at a footbridge (Ash Bridge), linking the routes on both sides of the river. The loop hike involves crossing the bridge to the west side and continuing upstream, staying close to the river for a short distance further, then starting a steep, steady climb, rising 300 feet to the upper edge of the woods, and across a field to the road. The last streamside section is above possibly the most spectacular feature on this section of the river, Long Pool, a narrow, vertical-walled, deep-water channel below a cascade and waterfall, easily viewable only from the lower end, from a viewpoint on the path. The upper end can be seen by climbing back down to the stream just as the path starts to ascend, and clambering over slippery rocks to to the start of the narrows. The pool is a popular location for wild swimming.

The loop walk is completed by following the road (Church Hill) westwards, up a slope, past the 18th century parish church of St Brendan's, then right at a junction, and up to a flat hilltop; down the far side, re-entering woods above Hoar Oak Water and finally down to a junction with the B3223. 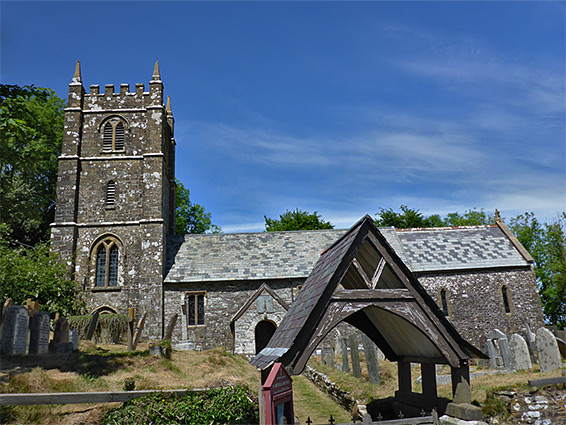