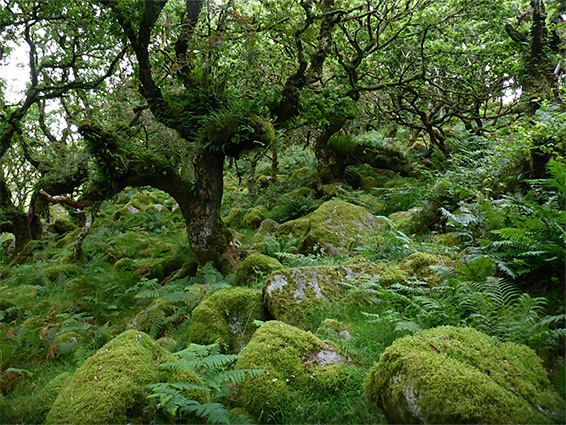 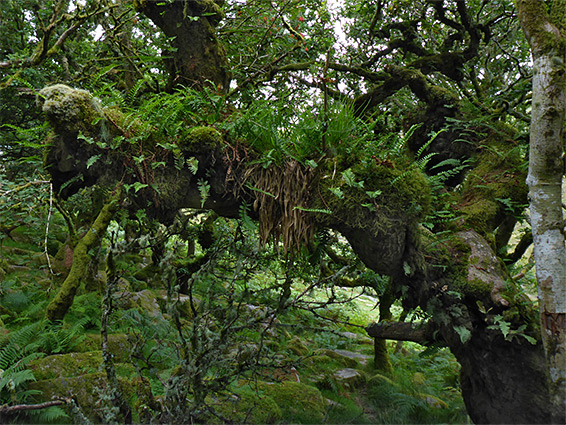 Ancient, high elevation oak woodland on a west-facing slope above the West Dart River; twisted trees, granite boulders, and many species of moss and lichen

Near the centre of Dartmoor National Park, Wistman's Wood is a relatively small area of high elevation woodland, mostly pedunculate oak with some rowan (mountain ash), extending a quarter of a mile in a narrow band along the eastern side of the valley of the West Dart River, around 1,300 feet above sea level. A few small patches of trees are found a little further north, and the wood has approximately doubled in area over the past century, formerly consisting of two detached sections, the expansion presumably due to the warmer and wetter conditions of recent decades, though it seems that in medieval times the wood was much more extensive. The most ancient trees are around 500 years old.

Because of the still harsh climate, the oaks grow unusually short, and adopt strangely twisted, stunted forms, their branches often running along the ground or resting on granite boulders, however some of the trees have started to rise taller and have straighter limbs, this another result of the improved growing conditions.

The appeal of the wood is due to the combination of the jumbled granite boulders (known as clatter), the contorted ancient trees, and the great variety of mosses, lichens, ferns and other plants that also inhabit the groves, often forming thick mats on the branches of the still living trees and covering nearly all of the ground and the boulders. Wildflowers are fairly limited, with just a few species of note such as climbing corydalis and ivy-leaved bellflower.

The wood is both a National Nature Reserve and a Site of Special Scientific Interest. 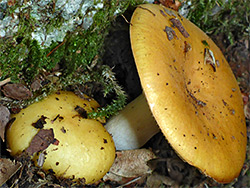 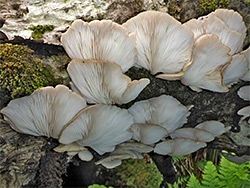 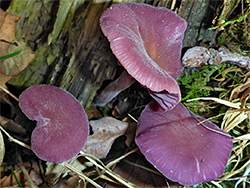 Wistman's Wood is reached by an easy, gently-ascending hike of just over a mile, and may be viewed from paths along the edges or another through the middle. Visitors are asked not to step on the mossy boulders or climb the trees, and to be generally careful when walking through the woods in order to avoid damaging the delicate plants. A casual exploration takes around an hour, so the round-trip is two hours, though this could be extended to all day by exploring the surrounding slopes above the river valley, which include five named tors, the best probably Longford Tor on the east side. 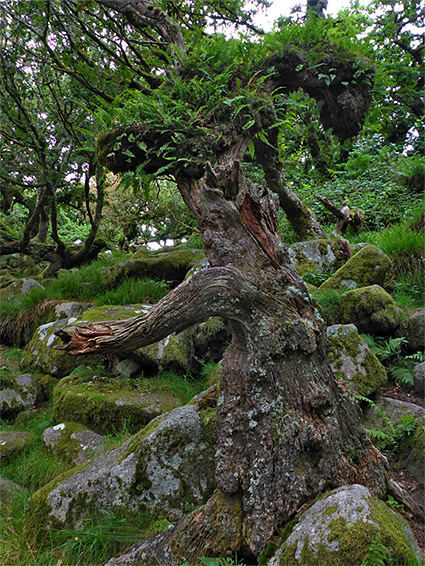 Ferns on a broken tree

The wood is quite remote, and not obviously signposted, but close to a main road, the B3357, at the little settlement of Two Bridges, centred on a crossing of the West Dart River. The designated parking is in a layby opposite the Two Bridges Hotel, with more spaces just north at the site of a former quarry, beside the start of a gravel track. The track heads north for 0.4 miles to Crockern Farm, from where a path continues 0.8 miles to the wood. The two parking places are often full during busy times, though some nearby verges can be used, two along the B3212 that joins from the northeast; if starting here it is quicker to first walk cross-country, northwestwards, over a field and down to the farm track. 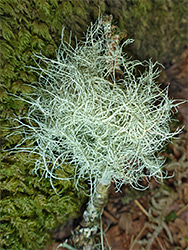 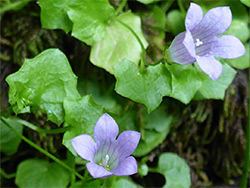 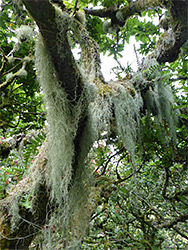 The track heads due north up the West Dart valley, staying about 300 feet from the river, narrowing as it passes the farmhouse, and leading to a gate in a stone wall, from where the path continues, over grassy moorland, later through another wall, and on to the wood. A sign just beyond the near edge of the trees gives information about the site; the approach path continues through the wood, while other paths follow the east and west perimeter. The trees towards the southern end are fairly recent, part of the expansion over the last hundred years, then just beyond is a 450 foot long stretch of more ancient specimens, this the southern portion of the wood when at its smallest extent, in the late 19th century. The larger (650-foot long) northern component is now linked to the south section by more new growth, and all areas are similar in appearance, just with slightly smaller trees in the more recently colonised areas. 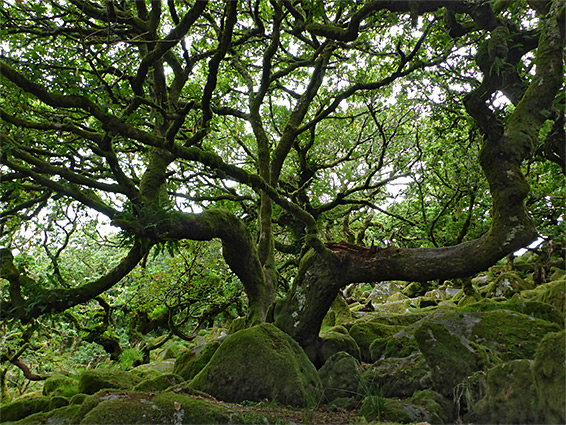