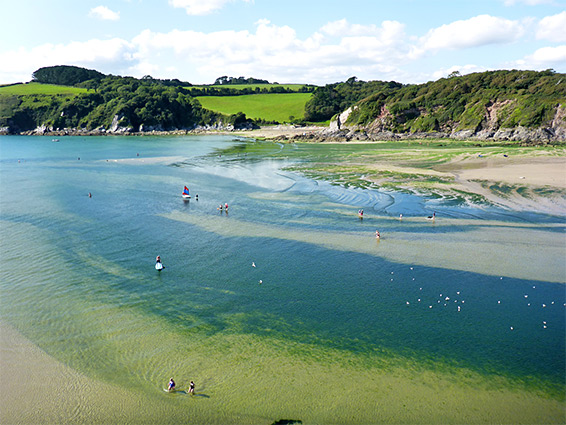 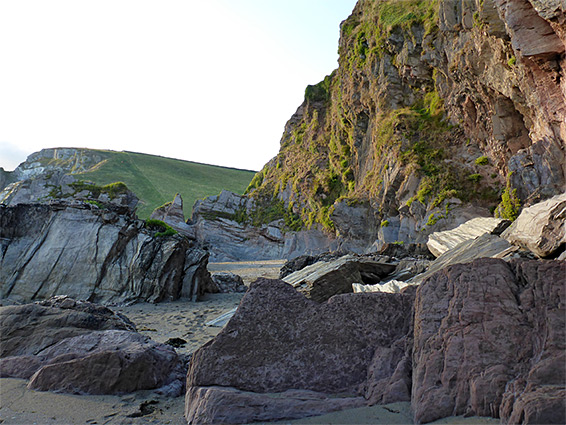 The three miles from Wonwell Beach, at the mouth of the River Erme, to Ayrmer Cove is typical of the south Devon coastline, being mostly lined by cliffs, up to 300 feet high, with small beaches of sand or pebbles below, often inaccessible. Like the majority of the coast hereabouts, the rocks are predominantly slate - grey, thin-layered and somewhat shiny, the strata upturned to a variety of angles up to 90 degrees, though mixed in some places with reddish sandstone and siltstone. Rocks in the western portion are from the Dartmouth Group, replaced to the east by the younger, overlying Medford Group that continues to Burgh Island and beyond.

From the wide (especially at low tide) sands of Wonwell Beach, at the end of a narrow road, a path follows the coast south then east, running through a band of rough grassland atop the cliffs, generally lacking any trees or bushes, so affording grand views of the rocks and beaches far below. A few of the beaches are reachable by scrambling down steep slopes but the only place with easy access to the shoreline is Westcombe (or Wyscombe) Beach, a particularly photogenic location, mostly sand though crossed by rock ridges with narrow passageways in between.

The valley leading to the beach offers a walking route back, through woods beside a stream to the village of Kingston then across fields and finally back through woodland to Wonwell Beach Road. It is though worth walking a little further along the coast to the next at accessible shoreline point, Ayrmer Cove, or another mile to Bigbury-on-Sea and Burgh Island. 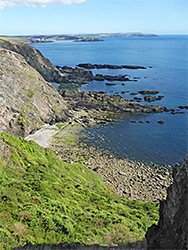 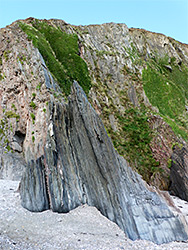 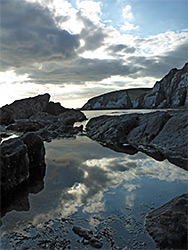 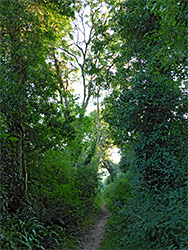 The A379 is the main route across south Devon; lesser roads tend to be narrow, winding and lined by high banks, with occasional steep parts, and so it is with the road to Wonwell Beach, starting along the A379 at Modbury, heading south through several junctions, for 4 miles. The road ends at a tiny parking area in woodland, on the east bank of the estuary of the River Erme. There are more parking places on verges back up the road a way. Despite this rather remote location the place is quite popular, though nearly everyone is here only for the adjacent beach; the path beyond is usually empty. 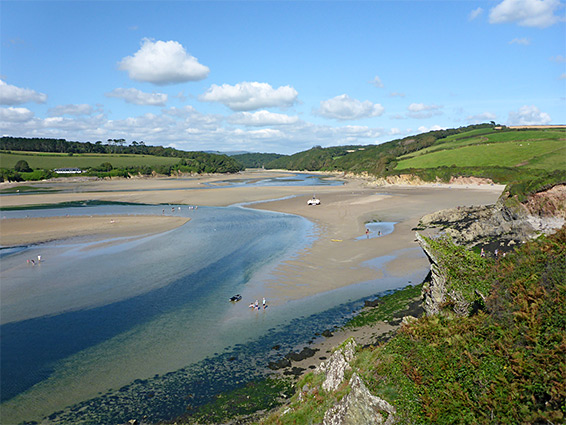 Wonwell Beach and the estuary of the River Erme

From roads end, the coast path runs south through a narrow strip of trees to a promontory (Malthouse Point), then descends to Wonwell Beach, a sheltered, west-facing, cliff-lined patch of sand, with eroded rocks at each end. A little way south is a smaller beach, Red Cove, and another short spur to an overlook (Muxham Point), for good views across the greenish waters of the estuary, to Meadowsfoot Beach on the far side. The land gradually rises as the path continues south, now through open terrain: past Redcove Point, Fernycombe Point and the difficult-to-reach Fernycombe Beach, to Beacon Point, now 300 feet above the sea, where the coast curves round to the east. 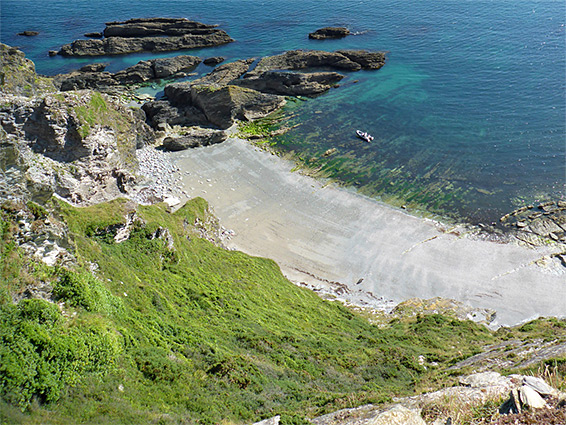 East end of the sandy beach below Broad Cliff

The coast path stays high for another 1.2 miles, above three more sand beaches (Beacon, Gutterslide, and unnamed sands below Broad Cliff), all separated by ridges and sea stacks, followed by a more generally rocky section, past Hoist Beach and Hoist Point, before the land slopes steadily down to near sea level, at the mouth of Westcombe, a shallow, V-shaped shaped valley containing a stream. Westcombe Beach is mostly sand, giving way to marine terraces towards the low water mark, while to the east are bigger rocks, separated by narrow channels of sand or pebbles, great for exploring. Some of the strata here are especially shapely and colourful. At low tide it is possible to continue over the rocks to the next accessible beach, Ayrmer Cove, also sandy and picturesque: alternatively this is reached by a short walk further along the coast path, rising 200 feet to a ridge and descending the far side. 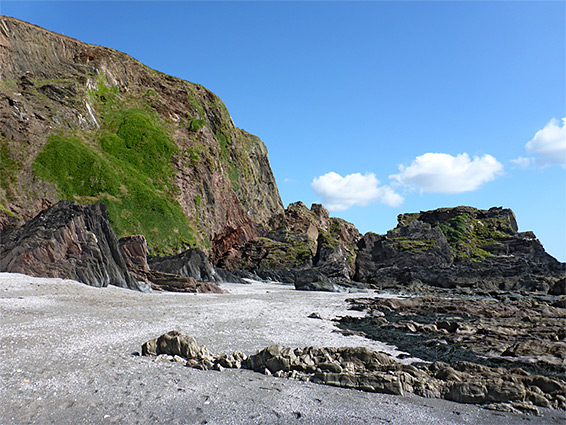 The inland return route is up a path/track along the west side of Westcombe valley, through moist, shady, tree-lined surroundings close to the stream, which is dammed in several places to form pools. The track reaches Kingston village in 1.5 miles, and a short walk on quiet roads leads to a path off to the left, crossing four fields and another patch of trees (Furzedown Wood and Wrinkle Wood), descending steadily, and emerging at the end of the road to Wonwell Beach. 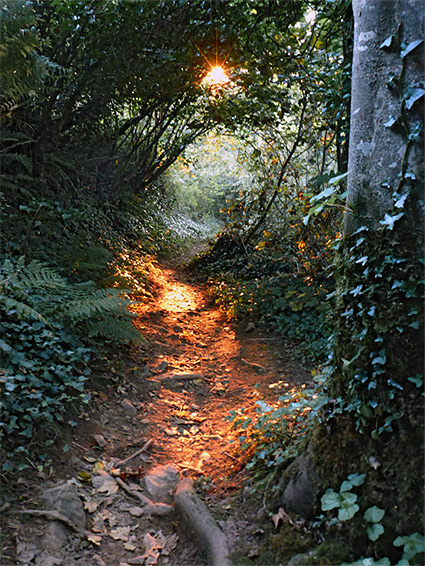