The east end of Dorset's Jurassic Coast - a line of inaccessible chalk stacks below vertical cliffs, with more spires nearby (The Pinnacles), and the high ground of Ballard Down

Old Harry Rocks, a name of uncertain origin, are a group of chalk sea stacks that form the easternmost tip of the Isle of Purbeck in Dorset, and also mark the eastern end of the 96 mile Jurassic Coast. The chalk exists in a relatively narrow band, stretching from the vicinity of Lulworth in the west, all along the north edge of the Purbeck Hills before broadening somewhat when approaching the coast, into the high ground of Ballard Down that separates Swanage and Studland bays, then narrowing to a peninsula - the Foreland, or Handfast Point, and ending at the Rocks.

Most of the rocks, including the peninsula, are from the Portsdown Chalk Formation, while to the south are narrower bands of four successively older layers - the Seaford Chalk, Lewes Nodular Chalk, Holywell Nodular Chalk and Zig Zag Chalk. Many millennia ago the chalk strata continued above ground further east, all the way to what is now the Isle of Wight, and a similar line of sea stacks are found on the western tip of the island - the Pinnacles.

Old Harry Rocks are in general only accessible at sea level via canoe or boat as all the cliffs nearby are vertical, up to 250 feet high; instead they may be viewed close up from the edge of the peninsula, reached by an easy one mile walk from the nearest parking area. Several small projections off the peninsula allow differing views, from various angles. The walk may be extended by continuing southwestwards along the cliff top, passing two more stacks (also known as the Pinnacles) then inland across the downs and back via a country road, to make a round trip loop of 3.5 miles. 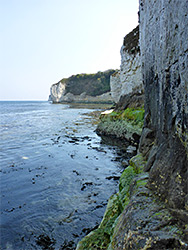 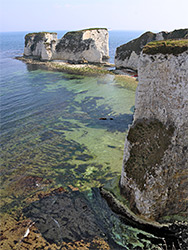 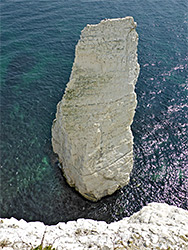 
The wider views are quite spectacular, from Swanage in the south all across Poole Bay towards the Isle of Wight in the east. The calcareous grassland of the downs is good for wildflowers, though perhaps less so than might be expected since most of the land hereabouts was used to grow crops during World War II and hence subject to fertilizers and pesticides; it has since been returned to a natural state. Another hike option, to explore part of the coast, is to walk at the base of the cliffs west of the Rocks, starting from the sandy beach at Studland - while it is not usually possible to continue all the way to the Rocks themselves since parts are submerged even at low tide, the first half mile at least is more readily accessible. Spring tides and perhaps for very short time around other low tides do allow walking all the way whilst keeping feet dry, though only a short time is available for exploration before the waters start to rise. 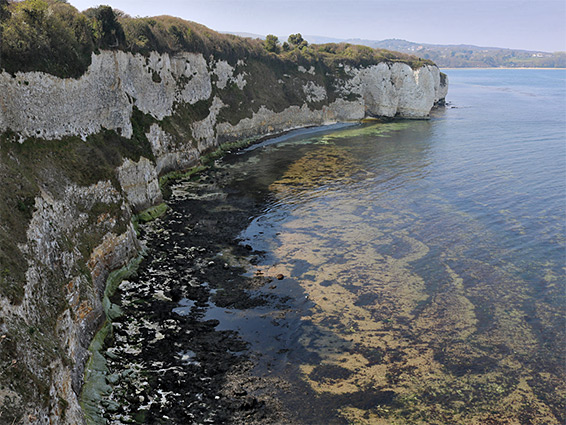 Studland to the Rocks

The path to the Rocks, the Southwest Coast Path, is accessed from the village of Studland, starting from the South Beach carpark along Manor Road - walking a little further south on the road then on a lane to the junction with the main path. To the northwest this accesses the local beach while in the other direction it heads towards the rocks, initially through a patch of trees, climbing gradually, followed by a wide strip of grassland. Chalk cliffs have formed to the north, out of sight, since the edge of the land is obscured by hedges, until the trail leaves the grassland, enters another patch of trees, and a very short side path goes to the first of several narrow, grassy, northwards-projecting promontories, 70 feet above the often shallow, greenish waters below, at the foot of the white cliffs. There is then just a little more woodland and a meadow, before the main path arrives at the furthest tip of the peninsula, for the closest views of the Rocks. 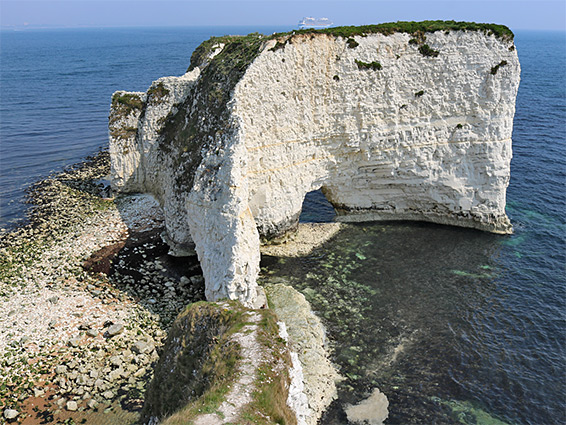 End of the unofficial path towards Old Harry Rocks

The Rocks, and the Cliffs

Nowadays 'Old Harry Rocks' loosely refers to all of the sea stacks, which comprise two relatively large blocks (the nearer containing a large sea cave), sometimes known as No Mans Land, separated by a narrow channel, with a much smaller spire to one side, close to the partially collapsed remains of another - originally the intact pinnacle was Old Harry while the now disintegrated pillar was Old Harrys Wife. Around 200 years ago the mainland extended further, incorporating the two large stacks, but erosion has left these unreachable from above. The coast path leads to a viewpoint on the clifftop, 130 feet before the actual tip of the land; an unofficial and somewhat disused path does continue almost to the very end but this becomes increasingly narrow, less than 2 feet wide in some places, with sheer drop-offs on both sides. Initially it is fairly level, so not to treacherous, then it slopes steeply down and has loose stones on the surface, making this section dangerous, and certainly not recommended; landslips have left the path even narrower than it once was. Nonetheless, it is still possible to progress almost to the end of the land, where the ground falls away ahead, at this point still 30 feet or more above the sea.. 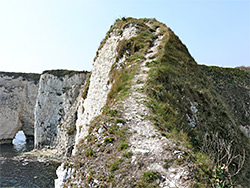 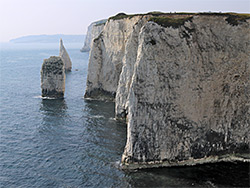 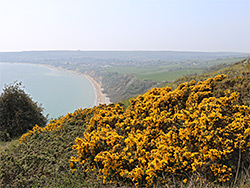 The Pinnacles and Ballard Down

From the viewpoint, the coast path bends to the southwest, running above a longer line of cliffs, and getting steadily higher. In the vicinity of Old Harry Rocks are five little promontories separated by small, cliff-lined bays, which offer alternative viewpoints of the formations. Next is a lengthier beach, book-ended by two more stacks, not individually named but known collectively as the Pinnacles. The first is squat, and round in cross-section, the second quite narrow, shaped like a shark's tooth. From here it is half a mile to the far side of the vertical cliffs - Ballard Point - where the coast moves westwards and the sheer walls of the Portsdown Chalk are replaced by a steep, eroding slope (Ballard Cliff) formed of the underlying chalk strata, partly vegetated. The high ground above, Ballard Down, is crossed by the coast path which reaches a junction after another half mile, with a shorter, northwards path down to the end of a residential lane, which leads back to Studland. Far below the downs, at the base of Ballard Cliff is a narrow, rocky beach, accessible for several hours around low tide, but only up to the point, until the first permanently submerged cliff is reached. 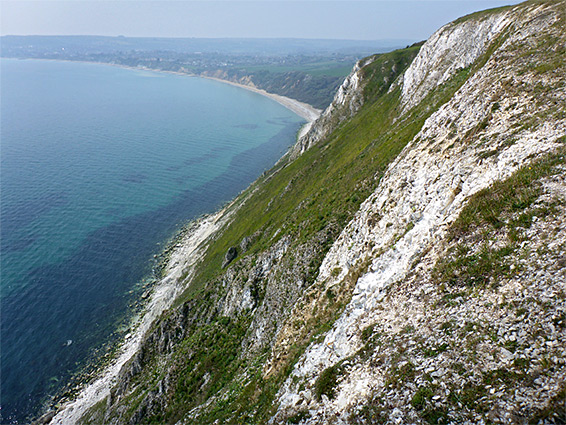