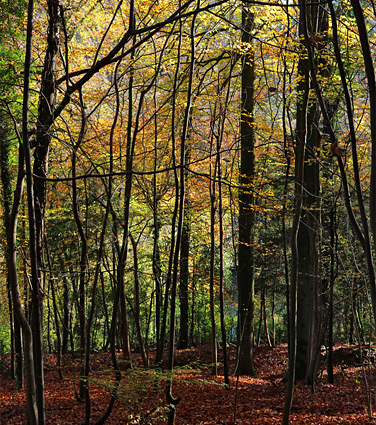 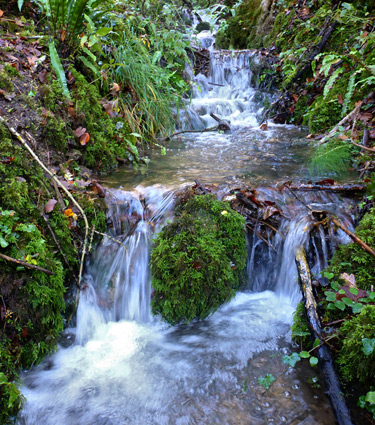 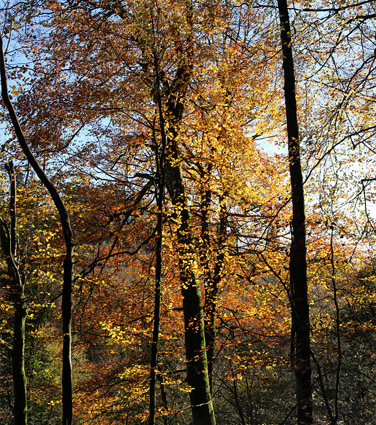 Ancient woodland, including beech trees, along both sides of a narrow valley centred on a small, spring-fed stream, the upper end of which forms waterfalls and cascades

Box Wood Nature Reserve half a mile east of Nailsworth is recently created (2017), not widely known, and a little difficult to locate. The wood covers both sides of a short but relatively deep and narrow valley centred on a small stream, an unnamed, north-side tributary of Gatcombe Water, and contains a mix of trees including beach, box, hazel and conifers, together with a range of typical ancient woodland plants such as bird's nest orchid, bluebell, wild garlic and wood anemone.

The beach trees, some tall and large, are particularly impressive in the autumn, and the generally moist environment is good for fungi, while added interest comes from the stream, which at its upper end splits into several branches, originating from springs in the limestone bedrock (Salperton Formation), some within the reserve, some just outside, a little further uphill in Box village. The crystal clear water flows down the slopes, over travertine cascades and little waterfalls, before forming a shallow, boggy pool in a flat section of the valley floor, lined by patches of carr woodland.

Paths traverse each side of the valley, forming a loop of 0.7 miles, and other areas can be explored, off-trail, though the ground is rather steep in many places, and quite overgrown beside the lower portion of the stream. 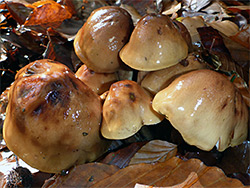 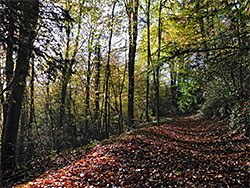 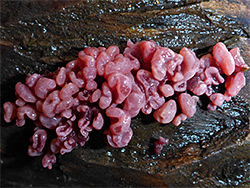 The nature reserve may be accessed from the south, along a road that traverses the lower slopes of the valley, crosses the stream then bends abruptly back on the opposite side - a section known as the Devil's Elbow - though parking is very limited here, and instead, the best start point is along a narrow lane (Scar Hill) above to the west, from where two paths enter the reserve, and there are two designated parking areas, one beside the north entrance, the other 500 feet north of the southern entrance. From the south entrance, high above the stream, a path tracks north, staying fairly level as the valley floor gradually rises; past one connection with the alternative entrance and a second junction with a path from the Devil's Elbow, continuing to another intersection with the southwards trail down the far side of the valley, also leading to the Devil's Elbow. 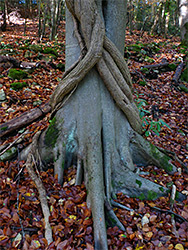 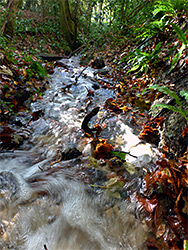 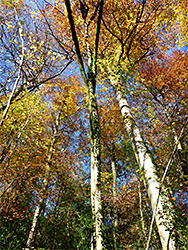 The oldest trees, including the tallest beech, are on the west side of the valley, and this is the best area for autumnal leaf colours. All the valley floor and most of the eastern side was originally clear of trees but has gradually become wooded over the past hundred years or so. The western slope contains at least one ancient quarry but otherwise has never been developed. The trees across the lower portion of the valley were originally known as Howcomb Wood, associated with Holcombe House, a grand residence along its south edge, while the open area at the upper end of the valley was part of the estate of Box House, another mansion on top of the hill to the east. 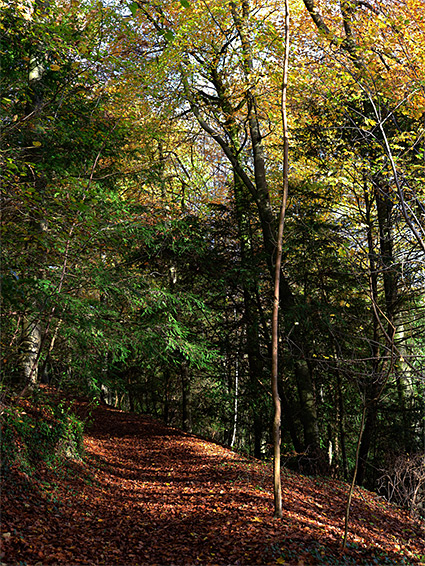