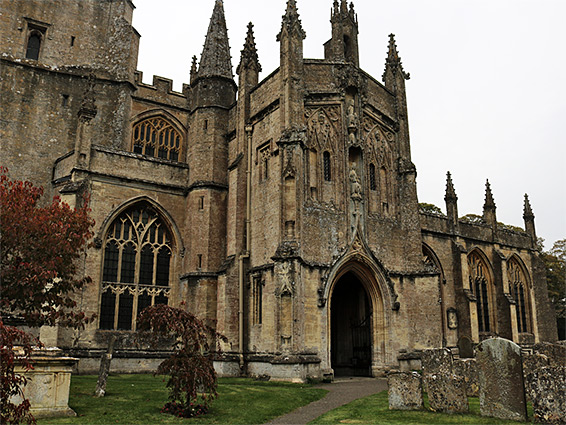 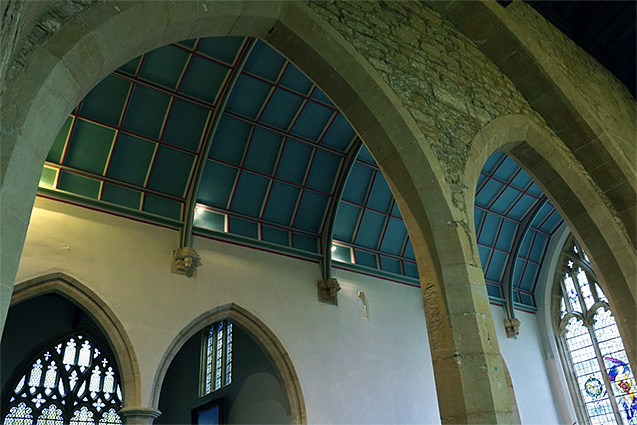 Cathedral-like parish church in a Cotswolds wool town, mostly dating from the 14th century, noted for perpendicular gothic architecture and a collection of early brasses

Northleach, 11 miles southeast of Cheltenham, is only a small town yet is gifted with an unusually old, large and ornate parish church, dedicated to St Peter and St Paul, and mostly dating from the 15th century. Known as the 'Cathedral of the Cotswolds' (an appellation also applied to Church of St John Baptist, Cirencester), it owes its great size and elaborate architecture to the wealthy wool merchants of the time, who funded the churches in their local towns.

The church itself was established by 1100, though very little survives from this period; the majority is from a rebuilding phase, in the perpendicular gothic style, a project which continued until the late 1400s. Highlights are the multi-light windows, the especially decorative south porch, and a fine collection of early brasses, amongst the best in the country, the oldest from around 1409.

Northleach sits in a shallow valley near the upper end of the River Leach, and was founded in 1277, though a settlement, and church, existed before, as 'Leece', mentioned in the 1086 Domesday Book. The place remains a traditional one-street town, with triangular marketplace at the centre and the church on the west side. Rebuilding and enlargement of the church commenced around 1380 with the west tower, followed by the nave, the chancel, the south porch, and finally the lady chapel, in 1489. Little changed over next 400 years, until restoration in the 1880s by Gothic revivalist James Brooks, with further alterations from 1961 to 1963 including new glass in the great east window. All the main fabric of the building is medieval, however. 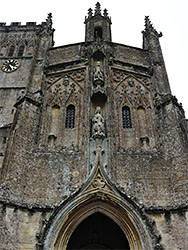 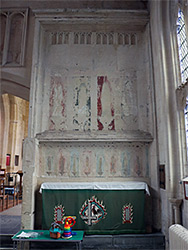 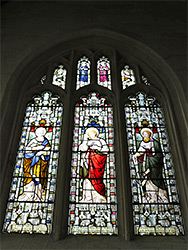 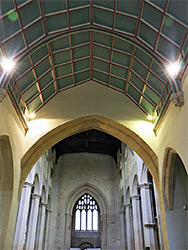 Ceiling of the choir

The church overlooks open countryside, just as it has done for many centuries. The graveyard is to the east, while parking for visitors is available along Church Walk to the south. Entry is via the south porch, adorned with studded pinnacles, many carvings and several statues (others are missing); inside is an intricate vaulted ceiling with decorative bosses. The porch opens to the south aisle of the six-bay nave, which is lined by relatively plain octagonal columns, rising to the clerestory. A great arch leads to the base of the west tower, with a broader arch at the east, linking with the chancel. At the east end of the south aisle is a small chapel featuring ancient, though faded, wall paintings. The nave ceiling is of wood, unadorned, in contrast to that of the chancel; a broad barrel vault, painted in red and blue. The chancel is relatively plain, lined by three side windows, of clear glass, and a large east window containing stained glass from 1963. To the north are the vestry and a chapel, while on the south side is the larger lady chapel, also illuminated by clear glass windows. A fine three-seat sedilia from medieval times is positioned beside the altar. 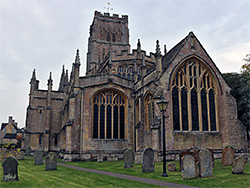 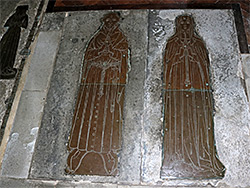 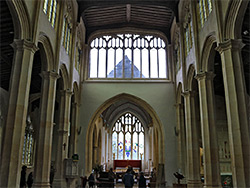 Most brasses are located in the nave aisles, nearly all commemorating local wool merchants. The oldest, at the west end of the north aisle, is thought to be of Thomas Adynet (died 1409), and wife. Nearby, from 1447, is a brass with three figures - Agnes and her two husbands, William Scors and Thomas Fortey. Near the pulpit is the brass of a single figure, John Fortey (died 1458, son of Thomas), the largest single benefactor of the church. There are two more brasses close by - William and Agnes Midwinter (1501), and Robert and Anne Serche, also 1501. The south aisle has one brass, 1490, depicting John Taylour, wife Joanne and their 15 children. A few more brasses can be found on the floor and walls of the lady chapel, and in the chancel. 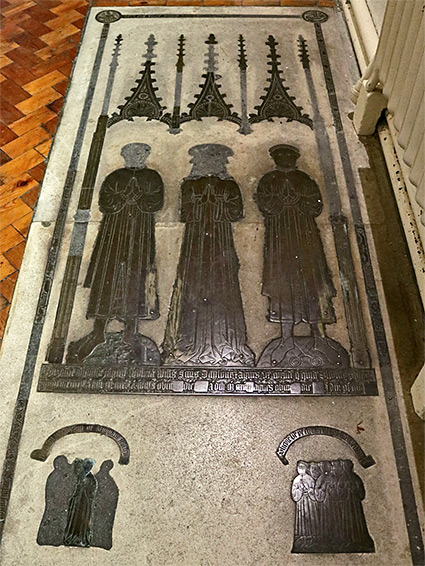