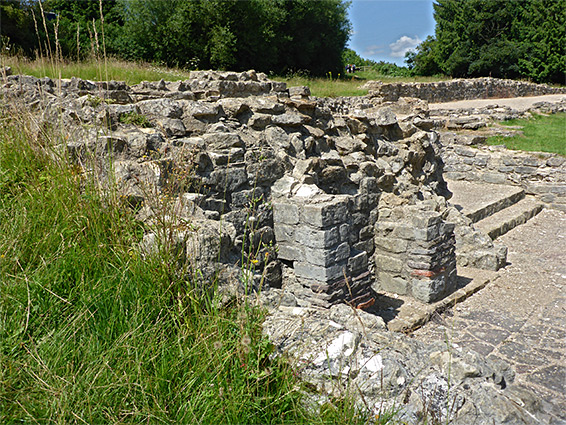 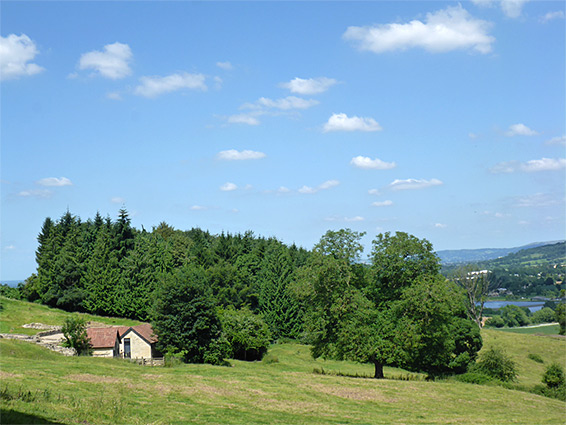 Excavated foundations of a substantial Roman villa, inhabited up to the 5th century, and rediscovered in 1818. At the head of a short valley below the Cotswold escarpment

Management
English Heritage
Entry
Free, though a Ł2 parking fee is charged
Location
Along a country lane 6 miles southwest of Cheltenham; GL3 4TW
In a rather isolated setting, not near any modern village, Great Witcombe Roman Villa is a substantial structure dating from around 150 AD and probably inhabited until the fifth century, then rediscovered in 1818, having been reduced in the intervening centuries to buried foundations, since excavated and preserved. The villa is positioned at the head of a short valley at the foot of the winding limestone escarpment along the western edge of the Cotswold Hills, below Brockworth Wood, perhaps sited here due to its elevated aspect, with long distance views northwards towards the Severn Vale, and also since it was close to a source of water, a stream 300 feet south, originating from a group of springs.

Like nearly all similar Roman sites, the ruins are not particularly photogenic, just a series of low walls, partly reconstructed, and at most 2 feet high, but the outline of all the rooms are clearly evident and the location is scenic, lined by wooded hills behind and wide open to the north. The most notable feature is a series of mosaics in rooms of the bathing area, though these are protected beneath modern structures, not open to the public.

The site is managed by English Heritage, is free to enter, open all the time, and reached by a short walk from a parking area along the dead-end road to the adjacent Coopers Hill Farm. Alternative access is from the north, via paths from Buckholt Road. 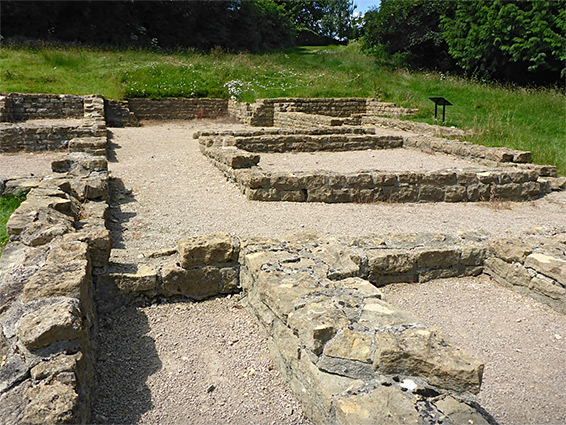 Part of the west wing, including the kitchen

The unsignposted lane leading to the Great Witcombe Villa forks south off Cirencester Road in Brockworth, 2 miles from the M5 (junction 11A); this road is the Ermin Way, a major Roman route linking Gloucester and Cirencester with Silchester. The ruins are 0.2 miles beyond the designated English Heritage parking area, just east of the farm house, in a field on a slight slope, trending to the east. The terraced dwelling, one of the largest Roman villas in the country, measures 230 by 130 feet in size, and consists of east and west wings linked by a corridor originally with tessellated mosaic floor, at the centre of which is the most unusual feature, a large, octagonal room (initially rectangular but modified in the fourth century), probably an atrium or similar, at the main entrance. The east wing included kitchens another domestic rooms, while the west wing contained the temple, or shrine room, and the bathhouse complex; seven tessellated floors have been identified here. Both wings were almost certainly of two stories, with the living quarters above. 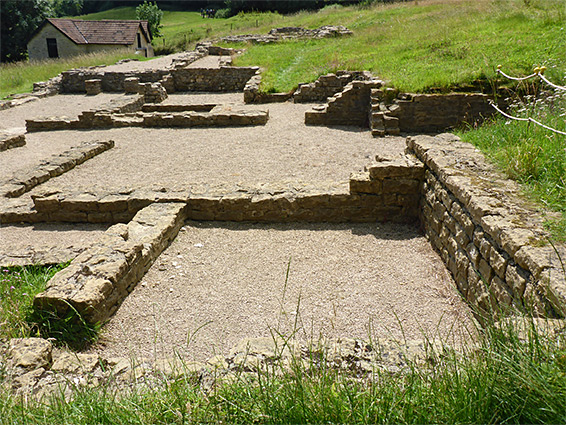