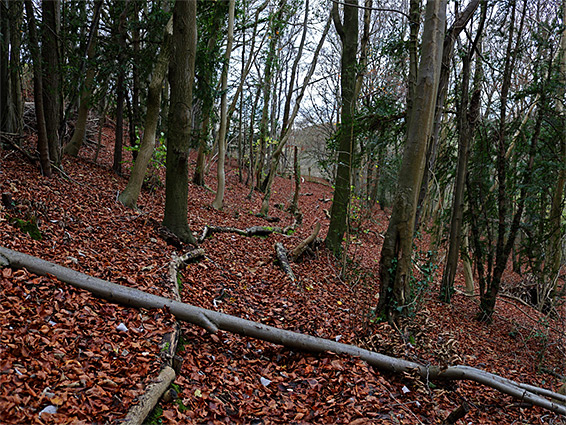 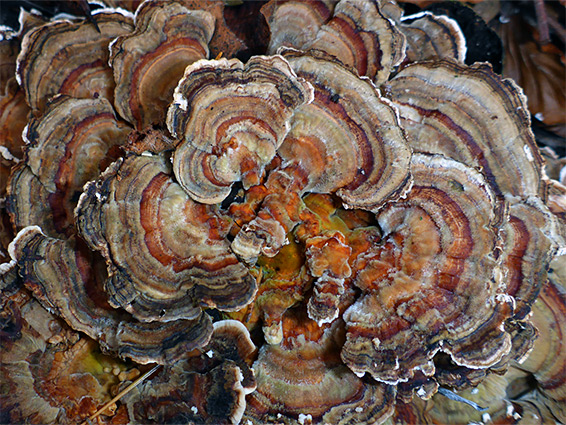 Small patch of ancient woodland, mainly beech, across a steep, north-facing slope above the valley of Slad Brook

The site was probably wooded for at least several hundred years but was planted with beech in the 19th century, when it was known as Trantershill Plantation then restocked in the 1950s after most of the older trees were felled for timber. The woodland was bought by Laurie Lee soon after, to prevent any further development, then purchased by Gloucestershire Wildlife Trust in 2013 when the nature preserve was opened, at a ceremony attended by Laurie's widow and daughter.

The wood is prettiest in autumn when the beech leaves are changing colour, and is also noted for a good selection of fungi and the usual array of woodland plants, with just two rarer species, bird's nest orchid and white helleborine. Other trees in the reserve, all planted post 1950, are yew, hazel and ash. The slope is traversed by a short path, a quarter of a mile, while other parts may be explored by off-trail walking. 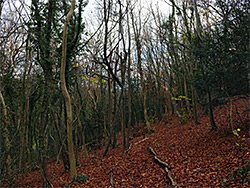 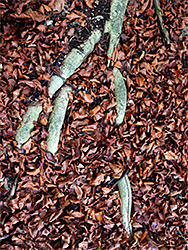 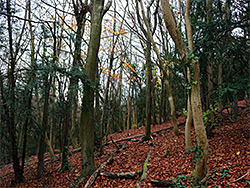 Leaves on the path

Laurie Lee Wood is bordered to the north by more well-established trees, Dunkitehill Wood, and to the south by another, larger nature reserve, Swift's Hill, which is famous for its orchids, with 15 species growing here. Both are reached by Knapp Lane, a narrow road branching off the B4070 1.5 miles northeast of Stroud. The path starts just north of a cattle grid, on the south side of the wood, and descends gradually through the trees to another entrance along the north edge, beside the settlement of Elcombe. The trail stays close to the road, and the majority of the wood is above to the south, extending 200 feet up the hill. The white helleborine seems to be concentrated along the south edge of the wood, while the other wildflowers are distributed all across the site. Also of interest is a very rare snail, lauria sempronii, which inhabits the wall dividing the two nature reserves and is known from only a few other sites in the country. 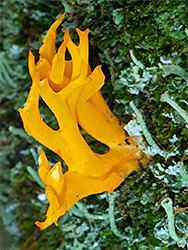 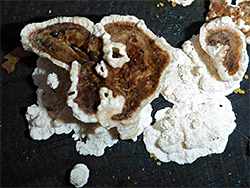