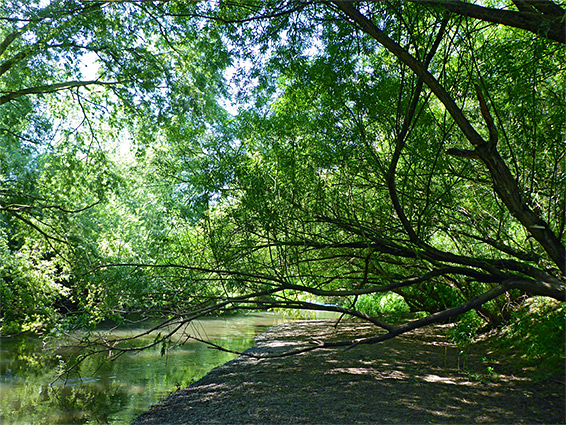 Management
Herefordshire Wildlife Trust
Location
Between the A4103 and A438 - the main access is along a side road at the southwest corner: HR1 1UT
Selected Wildflowers
Common knapweed, common meadow-rue, great burnet, marsh hedgenettle, meadowsweet, meadow saffron, meadow vetchling, pepper saxifrage, purple loosestrife, water figwort, wild onion
Lugg Meadow, a Herefordshire Wildlife Trust nature reserve, is a fine example of relatively rare habitat - a natural floodplain meadow, largely unaffected by artificial drainage ditches, which traditionally floods during winter, enriching the soil, then dries out in the spring, allowing a variety of wildflowers to grow. It is also one of the few surviving lammas meadows, these being undivided, communal pasture in which small sections are allocated to local farmers, as a source of hay. The name refers to the traditional early harvest festival on lammas day (August 1st), the first day of the year that hay was usually cut. Such meadows were also used for livestock grazing, after the hay harvest. Use of Lugg Meadow in this way dates from before the Norman Conquest and for much of this time it was divided into a large number of small parcels, though in recent years these have been amalgamated into a small number of much larger sections.

The meadow borders the River Lugg at the eastern edge of Hereford, and can be completely flooded to a depth of 2 feet or more in wet winters. Besides the pleasant scenery, of expansive, unfenced grassland and the tree-lined river, the reserve is also notable for its wildflowers; even though most are common, there are three rarer species, snakeshead fritillary, narrow-leaved water dropwort and mousetail, all of which prefer this specific habitat, of seasonally flooded meadows. 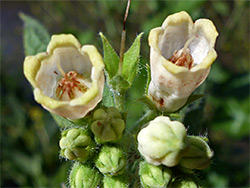 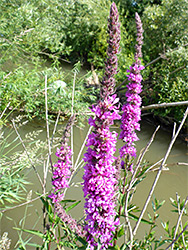 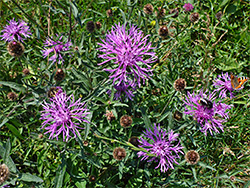 The nature reserve occupies the northern of the three components of Lugg and Hampton Meadows Site of Special Scientific Interest, and extends for 1.2 miles between the A4103 and A438 - this is Upper Lugg Meadow. South of the A419 is the similarly sized Lower Lugg Meadow, while just beyond, separated by a small strip of undesignated land is the smaller Hampton Meadow, mostly on the opposite (east) side of the river. The upper meadow, in the nature reserve, seems to be the best section for wildflowers. 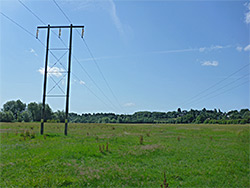 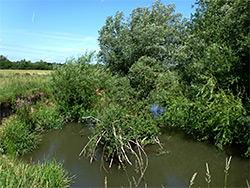 Tree in the river 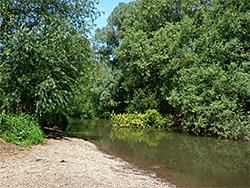 The nature reserve has several entrances, in the north, along the western edge, and to the south. The most popular is in the southwest corner, along a wide, little used side road off the A438, offering plenty of parking spaces; from here a path crosses some pasture, part of Lower House Farm which is also partially within the reserve, fields that are slightly higher in elevation and not normally flooded. Beyond a fence, gate and ditch is the main part of the reserve, an 80 acre section of open grassland, which is crossed by one path along the western edge, close to a ditch or small stream, mostly lined by trees, while the main route is along the east side, close to the River Lugg. In summer the river is mostly ten feet or more below the grassland, flowing through an entrenched, vertical-walled channel cut through the soft alluvial soils. The water though is accessible in a few places, where land slopes down to mud or pebble beaches, and this stretch of the river is a noted location for wild swimming. A few connecting paths cross the meadow, and visitors are asked not to walk off-trail in summer to avoid damaging the hay crop. Of the rare wildflowers, mousetail is small and difficult to spot while the snakeshead fritillary is widespread, both the usual purple and less common white flowered varieties. Narrow-leaved water dropwort is somewhat less obvious, but it and another species are often found along shallow depressions, either natural drainages or remnants of ancient ditches. 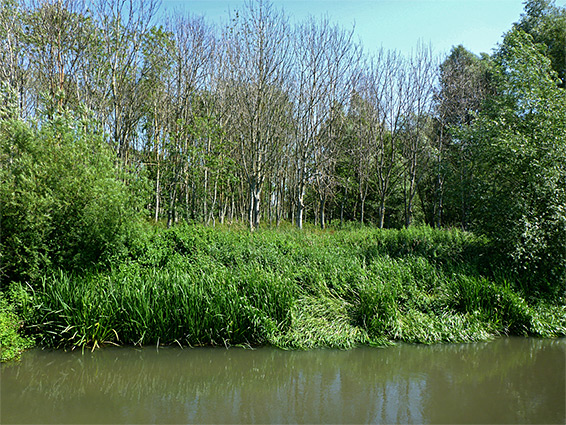