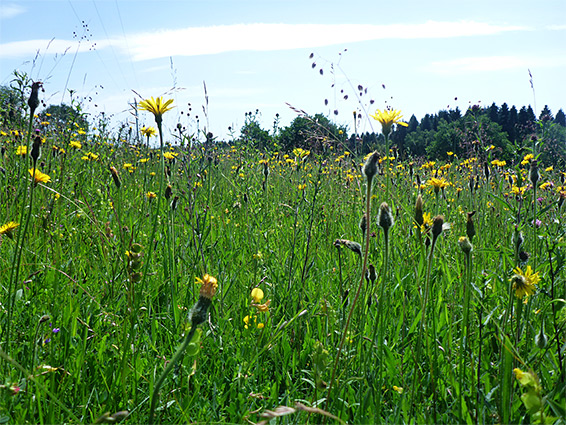 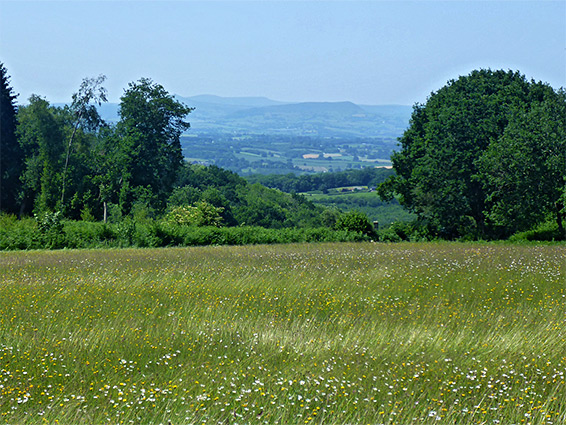 Four fields of species-rich grassland, lined by mature hedgerows, one of the finest wildflower meadows in the country

Management
Gwent Wildlife Trust
Location
Along a forestry plantation road just west of the B4293, one mile north of Trelleck; NP25 4PH
Selected Wildflowers
Common bird's-foot trefoil, common knapweed, common milkwort, common spotted orchid, common twayblade, cowslip, early purple orchid, giant bellflower, green-winged orchid, heath spotted orchid, meadow vetchling, rough hawkbit, yellow rattle
The New Grove Meadows, a nature reserve managed by Gwent Wildlife Trust, are four adjacent fields, regarded as one of the best species-rich grassland areas in the country, not because of the rarity of the wildflowers, as all species here are relatively common, but because of their abundance; for several months in the summer the flowers almost outnumber the grasses and sedges, and the fields are filled with a multitude of different colours.

The four meadows are arranged in a line, orientated north to south, beside the B4293 four miles south of Monmouth, and although all contain many flowers, the northern pair are the best, the species most varied, since this land is unimproved, never having been subject to the use of pesticides or fertilisers. The diversity of the southern two, which have been improved in relatively recent times, is now being increased by traditional meadow management techniques, including hay cutting and winter grazing, by Hebridian sheep.

The reserve is also notable for the long distance views - the grassland lies across the western slopes of Trelleck Hill and are high enough, around 780 feet, to overlook large areas of the lowlands, across the River Usk valley towards the Brecon Beacons. The views are mainly from the northernmost field since the others are bordered to the west by the trees of Loysey Wood.

In 2013 the fields were selected as the Monmouthshire representative for the Coronation Meadows Project, a collection of the best meadows in each of the 60 counties of the UK. 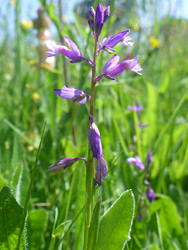 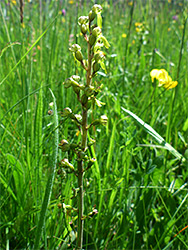 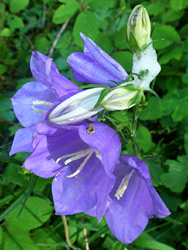 Parking for the reserve is at a junction a short distance along a track signed to the Wet Meadow forestry plantation, on the west side of the B4293, one mile north of the historic village of Trelleck. The reserve entrance is 200 feet back, at the corner of the southernmost field. Paths develop through the long sward in summer, when visitors are advised not to trample elsewhere across the grasslands in order to protect the plants; the paths run diagonally across the first field and around the margins of the other three. A fifth field, to the north, is also managed as traditional hay meadow, by the owners, who live at the adjacent New Grove Farm, and this is also open to the public on some days.

Wildflowers in the meadows include six types of orchid - most numerous are the early purple and green-winged species, both peaking in April and May, while the others are common spotted orchid (May to August), heath spotted orchid (also May to August), common twayblade (May to July) and greater butterfly orchid (June and July), the rarest of the six. Some other flowers, typical of neutral grassland, are common knapweed, common milkwort and cowslip. In autumn the meadows support a good range of fungi, especially waxcaps, while the mature hedgerows which border all of the fields are good habitat for invertebrates and small mammals, including dormice. 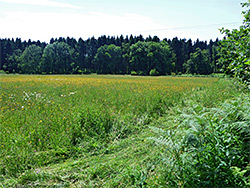 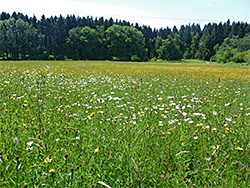 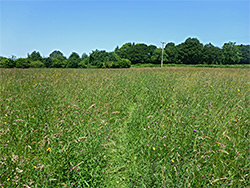