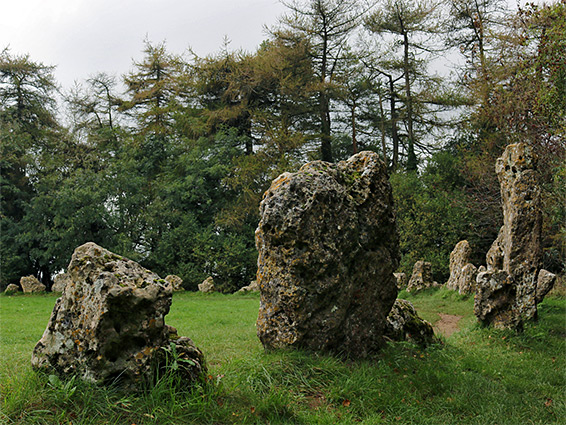 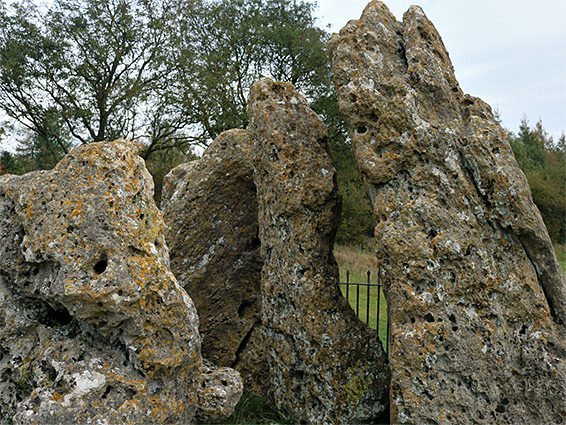 Three ancient monuments, dating from between 3,800 BC and 1,500 BC; a stone circle, a standing stone and a burial chamber

Management
The Rollright Trust
Location
Along Rollright Road, Little Rollright, between the A44 and A3400; OX7 5QB
The Rollright Stones are a group of three ancient megalithic monuments, closely-spaced and so presumably related in purpose, though of contrasting design, and created at different times. The oldest, dating from around 3800 BC, is a burial chamber, a dolman or cromlech, known as the Whispering Knights - four upright stones, centred around a fallen, fifth stone, originally the chamber roof. Intermediate in age is the most famous component, the King's Men, a stone circle constructed around 2500 BC, while the youngest is a single, standing monument, the King Stone, which was erected around 1500 BC, in the middle of the Bronze Age; the other two are from the Neolithic Age.

The circle and the chamber are in Oxfordshire, on the south side of a minor road from the village of Little Rollright, north of Chipping Norton, between the A44 and the A3400. The road forms the county boundary, so the King Stone, at the edge of a field on the opposite side, is in the adjacent county, of Warwickshire.

Most stone circles in the UK are in Wales, in the north, or in the far southwest (Devon and Cornwall); in the reminder of southern England are only four significant sites, the other three being the famous examples at Stonehenge and Avebury, and the less well-known circle at Stanton Drew in Somerset.

The Rollright Stones are owned by a charity, the Rollright Trust, who charge a nominal Ł1 fee for entry, paid into an honesty box. The three sites are just a few hundred feet apart so can be seen in less than an hour. The place is relatively popular despite its rather out-of-the-way location, and is unspoilt and undeveloped, and quite scenic, high enough for good views over the rolling surroundings, especially to the north, from the King Stone. 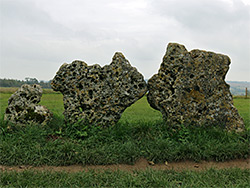 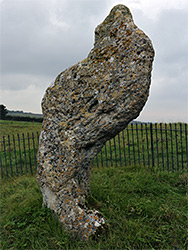 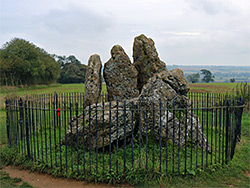 The King's Men, the largest component of the Rollright Stones, is very close to the road, just a few feet from the layby used for parking, and enclosed on three sides by a relatively recent grove of trees; to the south it faces open farmland. The stone circle is 108 feet in diameter and currently consists of 77 stones, a small number of which are replicas, installed during repair of the circle in the 1880s, at which time a number of fallen stones were re-erected, not necessarily in their original position, yet most of the circle is original, and unaltered beyond significant weathering over the millennia. The potmarked, lichen-covered stones date from the late Neolithic period, and like the other two groups, were constructed from the local oolitic limestone, probably transported less than a mile from a source at some kind of quarry. It is thought that when built the circle was near-continuous, some or all of the stones touching, and numbering over 100. This, together with the presence of an entrance as indicated by a pair of parallel horizontal stones suggest that the builders were from northern England since the monument has a similar design to many of the circles there.

The Rollright Stones, from the north

The King Stone is situated in a grassy enclosure just north of the road, on a ridge overlooking the valley of Long Compton. The stone is 2.5 metres high and curiously shaped, narrow at the base and curving above, since the pillar has in the past been chipped away for souvenirs, and originally is likely to have been much more symmetric in shape. The stone is around 3,500 years old and is possibly associated with a nearby burial chamber, though there is limited evidence for this theory. Like the Whispering Knights, the stone is enclosed by metal railings for protection, installed in late Victorian times. 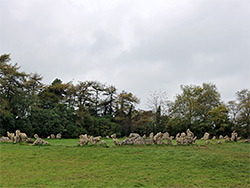 The circle, from the south 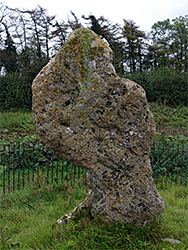 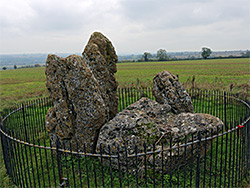 The Whispering Knights, 1,100 feet west of the stone circle, are reached by a path that parallels the road then turns south, running alongside a forestry plantation. The monument consists of four standing stones and a fallen caprock (intact until the 18th century) but probably once included several more uprights, forming quite an impressive monument, visible for a mile or more in most directions. With a construction date of approximately 3,800 BC, this is one of the earliest such monuments in the country. Like the other two groups, the name derives from medieval legend, unconnected with the actual use or origin; the closely-spaced stones were thought to represent conspiratorial knights, plotting against the (unnamed) king, and were turned to stone by the same witch who similarly ossified the king himself, and his attendants.