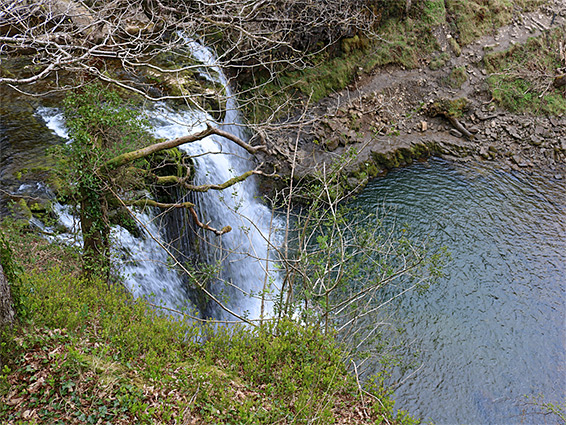 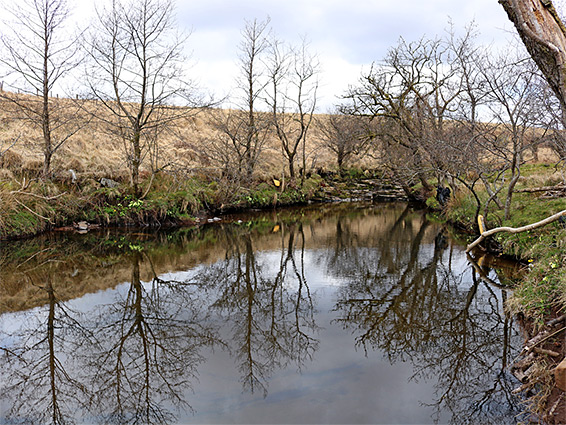 Pools, waterfalls, cascades and cliffs along a 1.2 mile section of the Afon Hepste, from open moorland near Bryn-cul to an enclosed channel above the Sgwd yr Eira waterfall

The Afon (River) Hepste flows for five miles, starting south of Fan Fawr in the middle of Brecon Beacons National Park and meeting the larger Afon Mellte, a third of a mile beyond one of the most spectacular waterfalls in the park, Sgwd yr Eira, Fall of Snow. A path leads to the base of the waterfall (part of the Four Waterfalls Walk) but there is no marked route above, where the ravine stays enclosed for another mile, and is wooded, beyond which, the upper reaches of the river cross open moorland. However, one worthwhile walk is to follow the enclosed section to the brink of the falls, passing many pretty pools and little cascades, plus a couple of medium-size waterfalls; walking is easy enough, at least in times of low water, with no wading needed, just use of stepping stones to cross in a few places. The hike is not suitable during periods of heavy rain.

Rocks along the river are Twrch Sandstone, mostly light grey, sometimes reddish, and they form flat terraces beside the water, often eroded into circular potholes, and thin-layered cliffs above. Many of the rock surfaces around the river are mossy, imparting a year-round green tone into the gorge, which is around 150 feet deep at the brink of Sgwd yr Eira. From a viewpoint near the brink, an unofficial path descends the hillside, to the north, and links with the official route some way downstream.

The lower end of the river forms the boundary between Powys and Rhondda Cynon Taff. 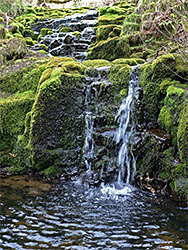 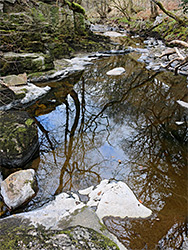 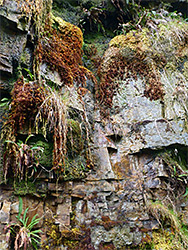 Plants on a cliff 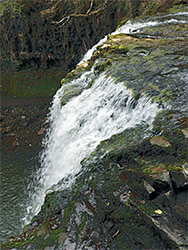 The enclosed part of the River Hepste is reached from the southeast, starting from the A4059 just north of Penderyn, parking on verges either side of a cattle grid; the river is 0.2 miles away beyond a stony farm field. A permissive path crosses the field, starting 250 feet north of the grid and meeting with another route, between the road further south and Bryn-Cul farm; the junction is very close to the river, at this point flowing between low grassy banks. 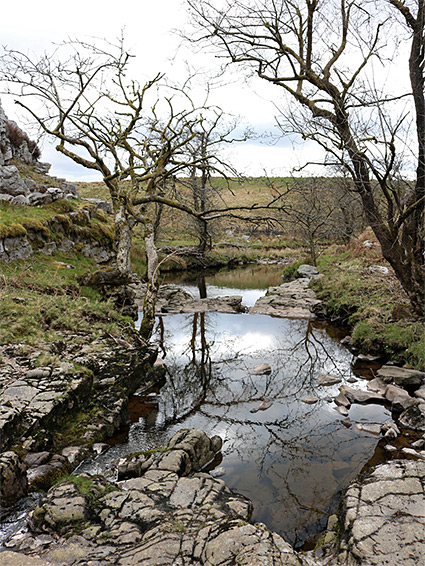 Rocks around a pool

Downstream of the vicinity of the path junction, the River Hepste starts to become bordered by rocks, especially beneath a sandstone outcrop on the east side. In dry times its waters move through a succession of calm, reflective pools, lined by the light grey bedrock, initially heading south then curving to the west as the surroundings become wooded, and bigger slopes rise at either side. The next section is less interesting, the river flowing over boulders, below Caerhowell farm, and here the walk is easiest along a bench on the north side. 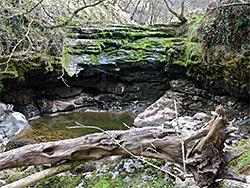 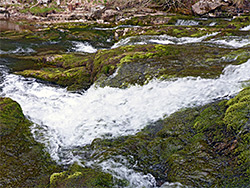 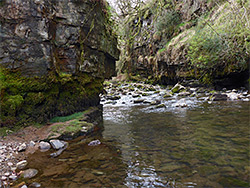 Next, after an mossy waterfall, are more rock-lined pools with low cliffs on one or other side, then a taller drop, maybe around 15 feet, to a pool with overhanging cliffs on three sides - a waterfall in rainy times but nearly dry on other occasions, as the waters flow partially underground. More gradual deepening leads to a bigger pool between mossy rocks, with a broad cascade below. A few hundred feet further is the tallest cliff, on the south side, formed of many thin layers, reddish in some places and covered with hanging plants. 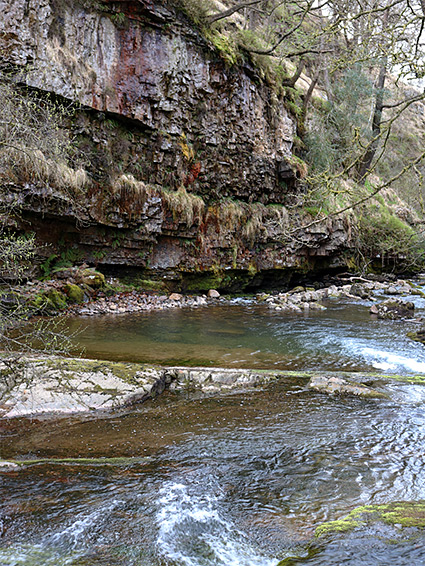 Reddish cliff on the south side of the river

The river moves round a bend, straightens out and becomes a bit less scenic, with just a few more cascades and some low cliffs, and is also harder to follow at water level without getting wet feet - it is easier, in some places, to traverse the slopes above. Nearly half a mile from the tall, reddish cliff, the final pools and cascades lead to the brink of Sgwd yr Eira, where the river drops 50 feet over a sandstone ledge. The drop can be viewed from either side, after carefully crossing a little way upstream, while other viewpoints are to the north, just past the falls and a little way above, from where a faint path leads downstream. 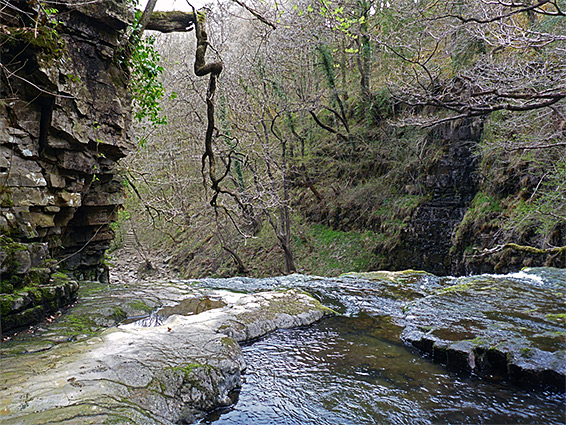