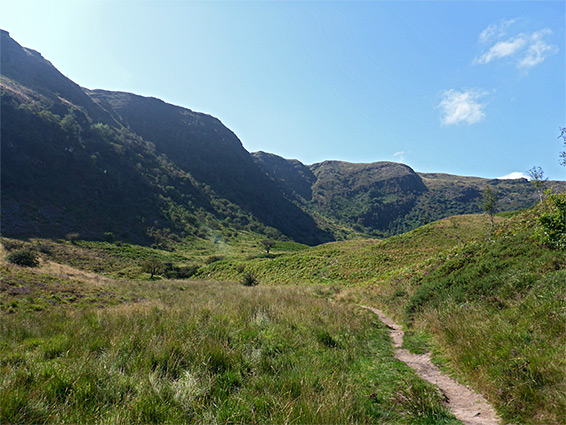 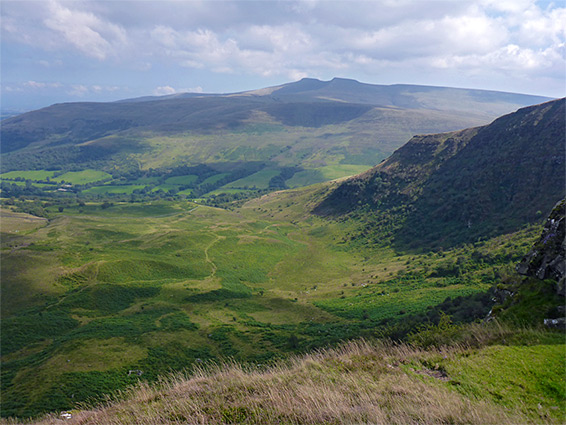 Craig Cerrig Gleisiad is a line of steep, north-facing cliffs along the edge of the Brecon Beacons, harboring rare plant species, while Fan Frynych is a flat summit to the north, together protected as a National Nature Reserve

Along the north edge of the Brecon Beacons 3 miles west of Pen-y-Fan, Craig Cerrig Gleisiad a Fan Frynych National Nature Reserve contains the spectacular remnants of ancient glaciation, centred on a line of steep, shady, north-facing cliffs (Craig Cerrig Gleisiad), below which is an enclosed, bowl-shaped, glacier-carved valley with a raised peat bog at its upper end, formed by water seeping into a hollow in the glacial moraine below the crags. Moraines are piles of loose rocks and gravel, left where glacial ice melted, which in this location occurred around 18,000 years ago. A few thousand years later, the debris was augmented by a huge landslide, from the western section of the cliffs.

North of the cliffs, the high ground extends to the wedge-shaped plateau of Fan Frynych, the northwest side of which also falls away very steeply. A third set of cliffs (Craig Cwm-du) is found a little way west, outside the nature reserve, and all three provide habitats for rare Alpine plants, some at their southern limit in the UK; species include mossy saxifrage, purple saxifrage, serrated wintergreen and roseroot. The plants are in general hard to observe, however, as most specimens are located on unreachable ledges high across the cliffs, though it is this inaccessibility, putting them beyond the paths of grazing sheep, that has contributed to their survival. 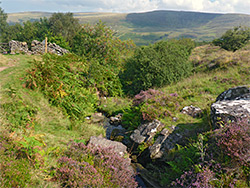 Heather by the stream 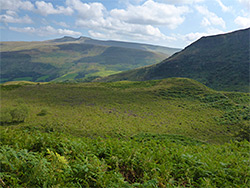 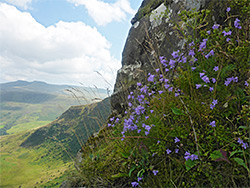 The high ground is typical of much of the Brecon Beacons - wide open moorland covered only by heather, short grass and occasional rocky outcrops, but the sheltered, glacial valley below the cliffs is rather different in character, more secluded and intimate. The quickest way to visit the reserve is via a path into the valley, following a small stream that originates from the peat bog, a one-way distance of 0.6 miles. For a longer walk (2 miles round trip, ascending nearly 1,000 feet), the path continues, climbing to a narrow neck of land that separates the glacial basin from the valley below Craig Cwm-du to the west, and then turning southeast, above the Craig Cerrig Gleisiad cliffs and steeply down the far side back to the start. A spur path extends north to the flat summit of Fan Frynych. The start point for all walks is directly along the main road (A417), just 2 miles north of the popular parking place for ascents of Pen-y-Fan, and yet despite the equally spectacular scenery the reserve probably sees less than one percent of the visitors. 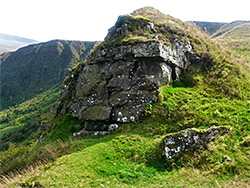 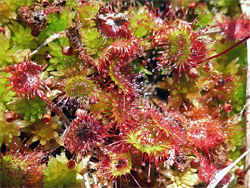 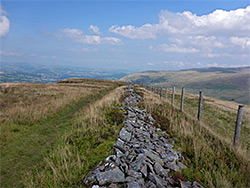 Parking for the NNR is in a layby on the west side of the road, 6 miles southwest of Brecon. The path follows the stream uphill through a narrowing belt of woodland, and soon emerges from the trees for the first good views of the cliffs. Two other paths branch off, one to the south, climbing to the top of the cliffs and forming part of the full loop, the other heading north, exiting the reserve and later curving westwards beneath Fan Frynych. The main path continues west, staying a few hundred feet from the base of the cliffs, rising steadily through the undulating moraines to the peat bog, at the base of steeper, bush-covered slopes. Plants in the bog include round-leaved sundew, bog asphodel and cottongrass. The bog is the usual target for short walks; after here the trail climbs more sharply and links with the route northwards across the Fan Frynych plateau, and the path south. This latter affords grand views towards the central Brecon Beacons, while curving round to the east and following very close to the rim of the cliffs, alongside an ancient stone wall, eventually descending back to the junction just beyond the edge of the woodland near the reserve entrance.