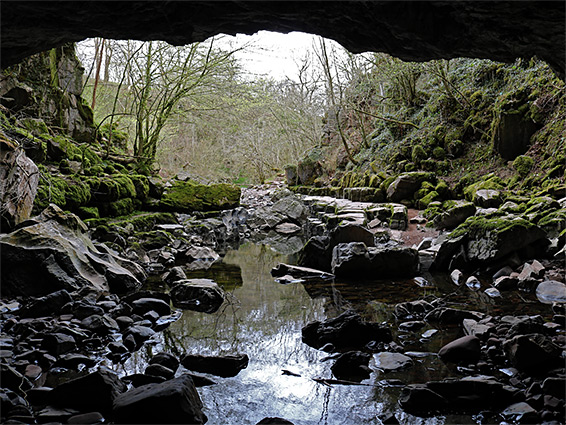 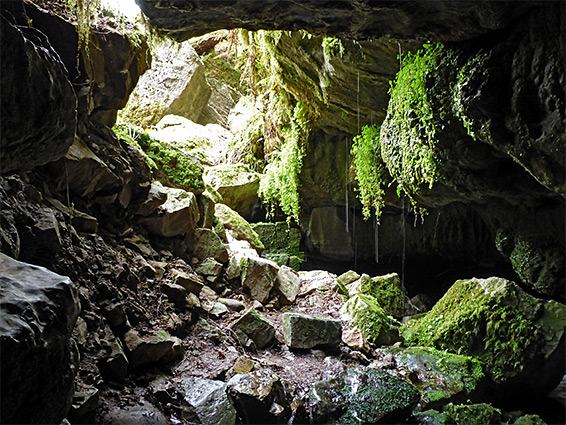 Short but spectacular cave containing an underground section of the Afon Mellte, with a wide passage at the entrance and a deep resurgence pool at the exit

Porth Yr Ogof is a short (0.4 mile) but spectacular cave within Brecon Beacons National Park, formed by the Afon Mellte as it passes through a limestone outcrop; a rare example of an underground river, and one easily accessible, since both above and below the river flows through a shallow valley. The total length, of all passageways, is around 1.4 miles.

The entrances are open and unguarded, and although passage all the way through requires some experience and is only permissible by designated caving groups, the upper end at least is easy to explore for a short distance since here the cavern is wide, and has dry benches at one side. The downstream end though contains a permanently flooded channel of deep, often fast-flowing water - the Blue Pool - and most of the dozen or more fatalities (post WW2) were in this section. The cave passageways are through carboniferous limestone (Dowlais Formation), overlain by sandstone.

Porth Yr Ogof was once managed as a show cave, though its passageways are not particularly pretty and most cannot be seen without getting wet. The site now is undeveloped and free to enter, however the only nearby parking place is an adjacent national park facility, fee Ł5. It takes less than an hour to view the cave from both ends, which are linked by a path along an ancient streambed above, passing several other entrances, while for a longer hike, the path continues south and links with the Four Waterfalls Loop. 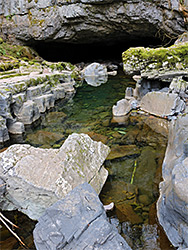 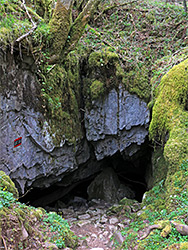 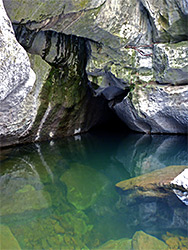 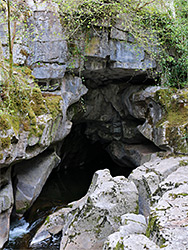 The cave is reached by a narrow road, 0.8 miles south of Ystradfellte, which crosses directly above the north entrance; parking is on the east side. For some distance away from the crossing the road lacks verges, and the few potential stopping places are coned-off or marked with No Parking notices. The Afon Mellte at this point is contained within a shallow valley with gently sloping sides, not becoming significantly deeper for a mile downstream. Also at the parking place is a small visitor centre, usually staffed all day. 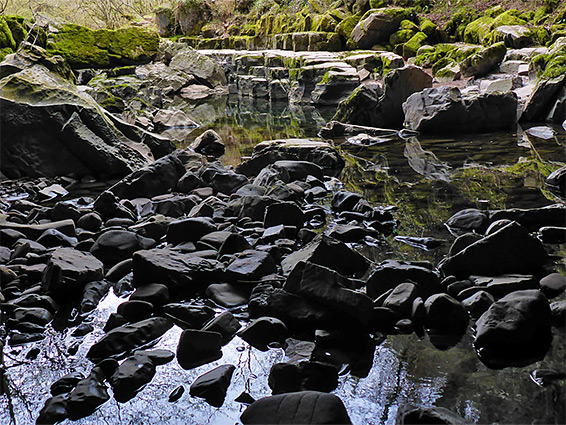 Reflections on the pool at the cave entrance

A short path leads down the slope from the parking area to the cave entrance, which is one of the largest of any in the UK, about 70 feet across and 26 feet high. Water levels vary greatly, increasing rapidly after heavy rain owing to the large drainage basin in the hills to the north, but much of the time the river hereabouts consists only of slowly moving pools a few inches deep, as most of its flow sinks below ground a little way upstream. Above the main entrance is a sheer, 60 foot cliff with the road on top. In the cave, about 200 feet of passageways can be explored, with torches, before the first pool. Another entrance, sometimes called the tradesman's entrance, is 200 feet northwest at the foot of a crumbling cliff, leading to a channel containing permanently flowing water, from sumps upstream. and connecting to the main cave via a low passageway then a short flooded section. 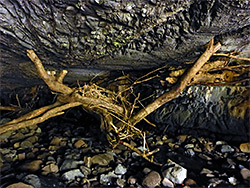 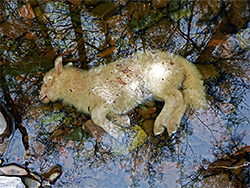 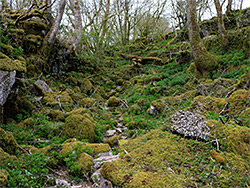 The main path from the parking area heads south, following the river downstream, staying a short distance east, while a side route runs right above the underground section, following the course of an ancient drainage. It passes four more large entrances and several smaller cavities before rejoining the other route shortly before the resurgence - the river emerges via a narrow channel many feet deep with a small waterfall beyond, below a cliff of about 20 feet. Just downstream are a series of sculptured rocks and potholes before the valley sides become wooded and more traditional in appearance.