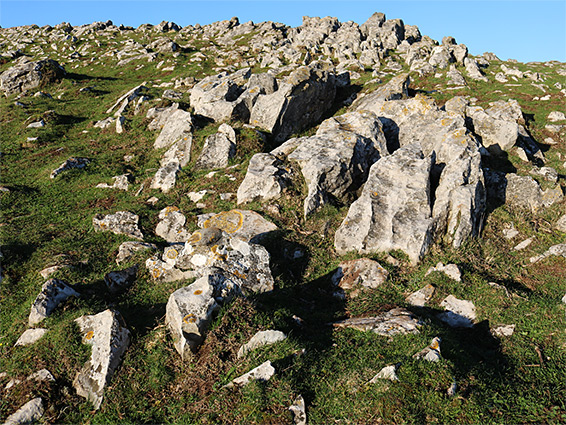 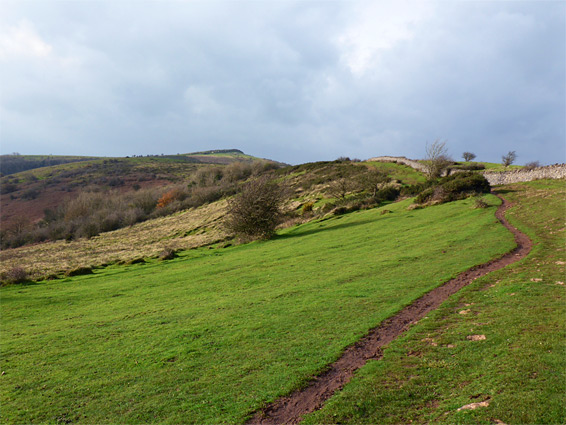 The westernmost and most mountainous of the six main peaks in the Mendip Hills; a conical summit topped by limestone exposures, overlooking the Somerset Levels and the Bristol Channel coastline

Crook Peak is the westernmost of the six main summits of the Mendip Hills and while not the highest, presents the most mountainous appearance, formed of a jagged outcrop of inclined limestone strata, surrounded by piles of boulders. The peak lies at the centre of a belt of uncultivated land that extends eastwards to encompass the neighbouring summits of Compton Hill, Barton Hill and Wavering Down, before sloping down to a valley, which provides a course for the A38. Most of the rest of the Mendips are partly bounded by walls and hedges; the only other significant areas of open terrain are around Cheddar Gorge, and at Black Down. Views from Crook Peak stretch a long way in all directions, to the Quantock Hills in the west, across the Bristol Channel to south Wales, east all along the Mendips and south over the Somerset Levels.

The top of the 628 foot peak can be reached by only a short walk, 0.8 miles, the usual start point being a layby along Webbington Road to the south; up to a sloping ridgeline then along this to the summit, but more of the western Mendips can be seen by continuing eastwards, over the three nearby hills and returning across the valley below, site of the small village of Compton Bishop - a 3.7 mile loop. The hills are mostly covered by grass, bracken, gorse, heather and brambles, plus a good selection of spring/summer wildflowers, and just a few patches of woodland, one, southeast of the main summit, concealing several short caves. 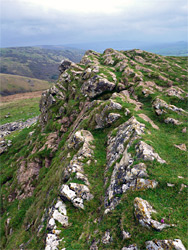 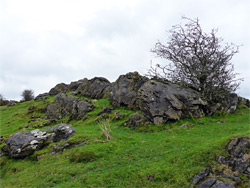 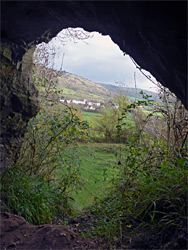 There are several access points near Crook Peak, including along the minor lane that curves round the west side, but Webbington Road is the most used approach. The layby along this road is 120 feet up the side of the hill, already high enough to have good views southwards, over the Levels. The path heads northwest, soon passing beyond a thin belt of trees and up to a junction on the crest of a ridge; from here the summit is a little over half a mile away, climbing with a steady though not too steep gradient. The ground is all grassy at first, dotted with a few bushes, while higher up are some rocky patches. The top of the peak has some quite extensive outcrops of carboniferous limestone, coloured grey to pale brown, the strata angled at about 30 degrees. The northeast side forms a small cliff, providing shelter from the often very strong westerly winds.

South side of the peak 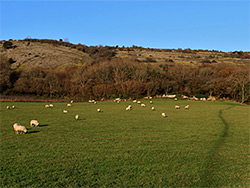 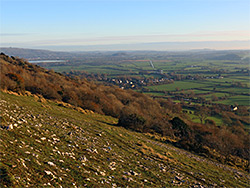 The onwards path slopes down a little to a five-way junction; three of the routes descend, and the other (now the West Mendip Way) continues over the high ground, alongside a recently-restored section of dry stone wall, up to the minor, grassy highpoint of Compton Hill, round the head of a valley to Barton Hill then up a little more to the extended summit of Wavering Down (690 feet), the far side of which has views of Cheddar Reservoir and the hills around Cheddar Gorge. The main path drops slowly down towards Cross Plain and the A38, while several lesser routes descend the steeper slopes to the south, meeting another path that angles to the southwest, aiming for a patch of woodland, which was established over the last hundred years or so, prior to which all was rough grassland. Near the lower edge are the crumbling ruins of a stone building. On the far side of the trees, the path crosses two fields and meets a country lane at the edge of Compton Bishop, from where the parking area is 0.7 miles away, partly on Webbington Road. A short and worthwhile diversion is to leave this road a quarter of a mile before the layby, following the lower end of the Crook Peak ridgeline path, through more wooded ground. Either side of the path are two short caves - Sandy Cave on the east side, a relatively small opening near the top of the ridge, beside an old quarry, and Denny's Hole to the west, this a larger, deeper cavern with a slippery mud slope at its entrance. 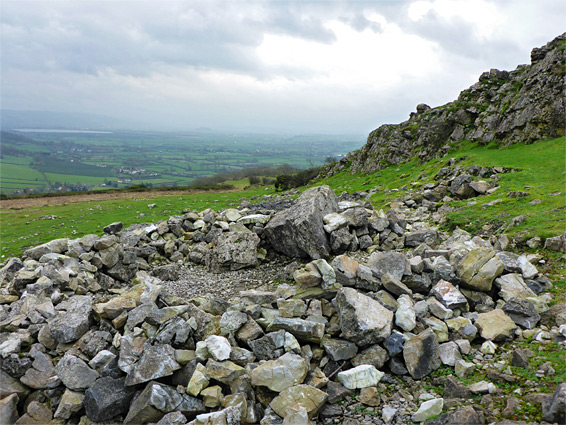