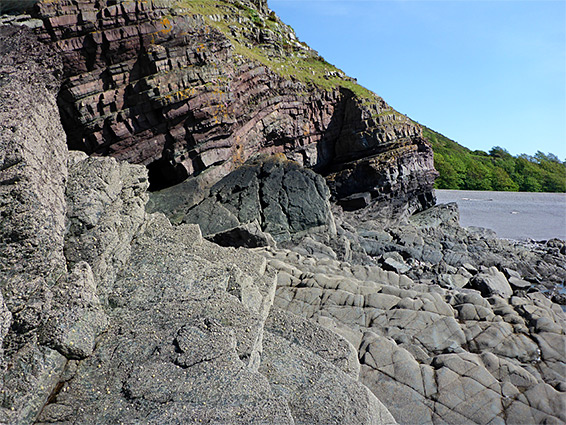 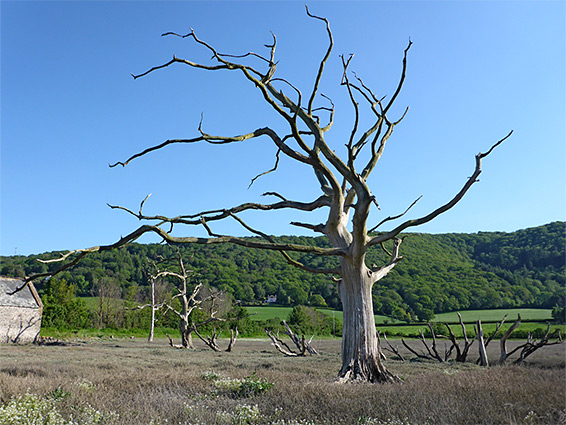 2.5 miles of the Somerset coast; saltmarsh, fields and a long pebble beach, between two sandstone headlands. The coast path is mostly inland, to avoid a breach in the seawall, though the beach is still easy to walk along

West of Minehead the Somerset coast is entirely cliff-bound, with the exception of a 2.5 mile section between Porlock Weir and Hurlstone Point, where the reddish Hangman Sandstone bedrock moves inland, replaced by low-lying fields and saltmarsh, bordered by a broad band of pebbles, the western third of which is Porlock Beach, the remainder Bossington Beach, named after a small settlement nearby.

Historically the flat farmland adjoining the beach was protected behind a continuous seawall, though a breach occurred following a major storm in 1996, flooding a large area and greatly increasing the extent of the saltmarsh, and the gap remains today, kept open by a stream flowing through, the waters of which are deep enough to present an obstacle if walking along the full length of the beach, so the official coast path is mostly inland, leaving Porlock Beach not far from Porlock Weir, following all along the south edge of the saltmarsh and across farm fields, through Bossington village and up the slope towards Hurlstone Point.

Another short path leads to Bossington Beach, a relatively popular place despite not having any sand, while a loop hike can be made by walking all along the beach, either wading the stream or (at low tide) crossing via stepping stones lower down; a circuit of five miles.

Paid car parks are beside the beach at Porlock Weir and in Bossington (a National Trust facility, charged at a flat rate of £5 per day); the description below begins from here, following the loop anticlockwise, so first heading towards Hurlstone Point. Starting from Porlock Weir adds another 0.7 miles. 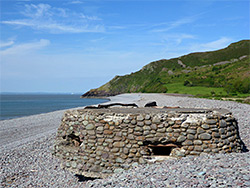 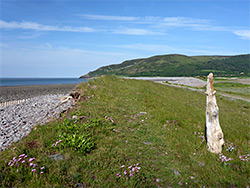 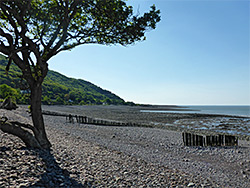 The National Trust car park in the little village of Bossington is set in wooded surroundings beside the River Horner. The eastwards coast path, initially an old lane, follows the river a short distance then moves away at the foot of a tree-covered slope, climbing slowly, coming gradually closer to the beach though staying separated from it by fields and a wildflower meadow. The main route branches east at a junction, while another continues up the hillside a quarter mile to a grand overlook on top of Hurlstone Point. Just after the first junction is a second intersection, with a short path down to the far east end of Bossington Beach, a broad band of light grey pebbles up to 400 feet across at low tide and sloping by 40 feet or more, via a series of terraces and steps. The cliffs below the point are colourful and photogenic, composed of twisted bands of the Hangman sandstone, with boulders and wave-cut terraces below. About 300 feet of shoreline is (relatively) easily accessible, before a bigger promontory; it does not seem to be possible to continue at sea level all around the point. 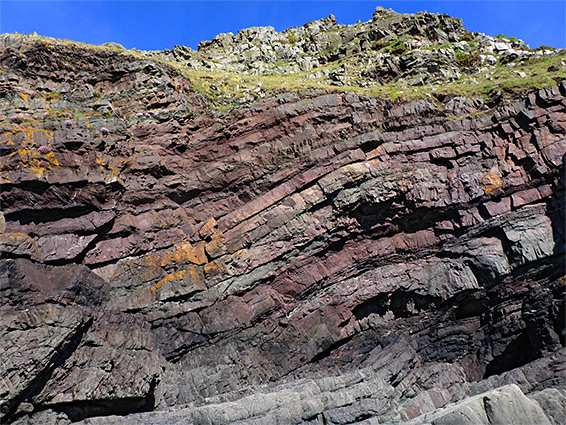 From Hurlstone Point, Bossington Beach extends 1.6 miles to the breach separating it from Porlock Beach. Features of interest include the River Horner, the lower end of which forms some marshy pools where its water disappears below the pebbles, a circular World War II pillbox, and the remains of an ancient limekiln. A path links this area to the Bossington carpark; beyond, to the southwest, the beach becomes less busy, as the fields inland give away to the saltmarsh. In the vicinity of the breach are several groynes and a few other structures in the intertidal zone, relics from the former position of the seawall, up to 200 feet beyond its present location. After the breach, the saltmarsh continues another third of a mile until replaced by fields once more, and here the coast path reappears, continuing along the edge of the beach for 0.4 miles to Porlock Weir. At low tide the sunken remains of an ancient forest can be seen, opposite the west end of the saltmarsh - a relic of times several thousand years ago when the coastline was a mile or more to the north; the stumps are positioned at the centre of a patch of red sand, also the site of several groups of oyster beds. 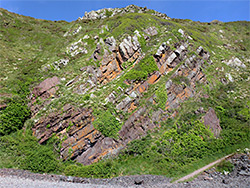 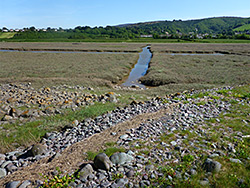 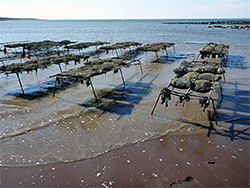 From Porlock Beach, the coast path turns inland, running along the edge of the saltmarsh that was mostly formed after the 1996 storm. It heads southeast initially then round a 90 degree bend, now aiming northeast, and passing an old stone building, Decoy Linhay, opposite what used to be a small grove of trees, Decoy Plantation, destroyed after the flooding. A few stark dead trees remain, providing good photographic subjects, and just beyond is another line of dead stumps, from trees also deliberately planted, once forming a barrier between a farm field and a patch of marshland. Near here is the Liberator Monument, a memorial to the crew of a US WW2 bomber that crashed on nearby Bossington Hill, on 29th April 1942; nine died and only one survived. The memorial was moved from its original location, the crash site on the hill, in order to be more visible. The last section of the coast path back to Bossington is further along the edge of saltmarsh, between fields on a track, and finally down a residential lane to the car park. 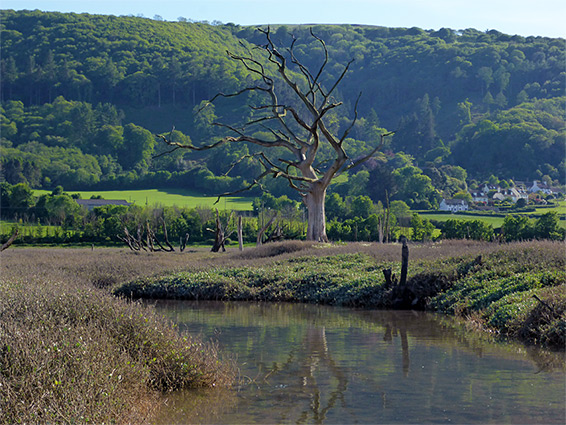