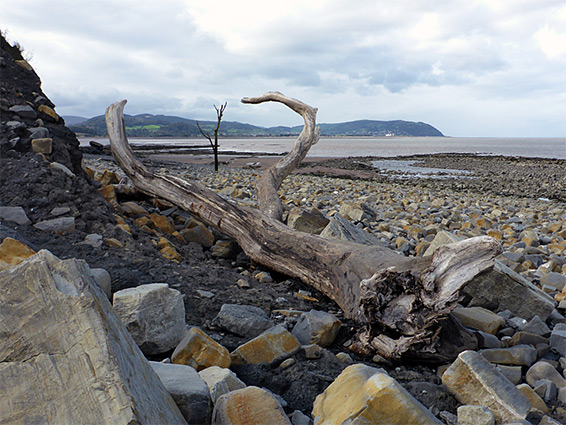 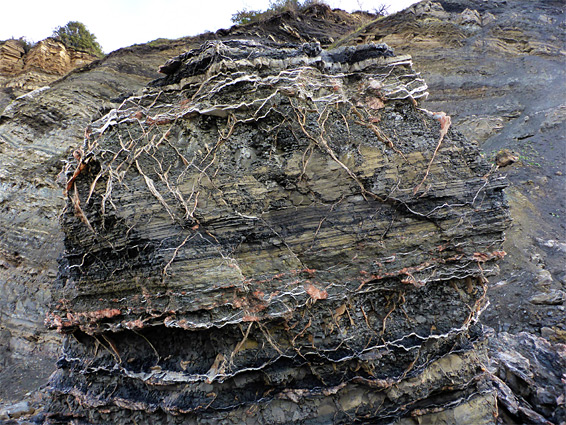 Scenic section of the Somerset coast. The eastern third (Watchet to Blue Anchor) is the most photogenic, lined by complex cliffs, explorable from above or below, while to the west, the 4 miles to Minehead is less interesting, bordered by fields and a golf course

The 6.5 miles of shoreline between Watchet and Minehead, the two largest towns along the north Somerset coast, can be explored on an all-day hike, via the coast path and/or by walking directly along the beaches. The eastern third (2.5 miles) is much the more interesting as here the land is edged by a series of cliffs of varying strata, principally greyish green blue lias and red brown Mercia mudstone, both containing prominent veins of whitish gypsum and orange alabaster, and eroded into a great range of formations including caves, pinnacles, wave-cut ridges and tiny arches - probably the most photogenic section of the lowland part of the Somerset coast, the section east of Minehead.

From Watchet, the cliffs extend west to the village of Blue Anchor and form the westernmost part of the Blue Anchor to Lilstock Coast Site of Special Scientific Interest. The next 4 miles, to Minehead, has no more exposed rocks, and instead the sea is bordered by sand/pebble beaches with grassland beyond, all similar in appearance. One other location along this stretch is reachable by road, Dunster Beach, while the remainder is accessed only by the coast path, running alongside farmland for some of the way, then the fairways of Minehead Golf Course, the far side of which adjoins the seafront at Minehead.

To see just the most scenic part, Watchet to Blue Anchor, involves a 5 mile round trip, taking three to four hours - out along the beach, back via the coast path (or vice versa); the undercliff section is passable for around two thirds of the time, just not around high tide as then the sea reaches right to the base of the cliffs in many places.

Free parking is available at Minehead Seafront, Dunster Beach, Blue Anchor Road and on residential streets in Watchet, and also at Helwell Bay on the east side of Watchet. The description below starts from Watchet, walking below the cliffs to Blue Anchor and along the coast path to Minehead, finishing with the return section of the coast path, from Blue Anchor back to Watchet. 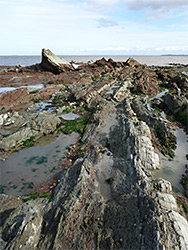 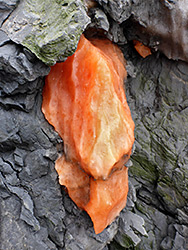 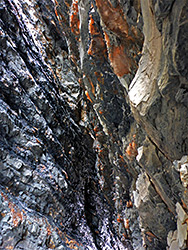 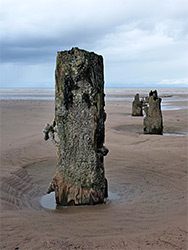 The west wall of Minehead harbor extends along the coast a short distance above a patch of pebbles (West Street Beach), crossed by several lines of posts and boulders. The retreating tide reveals a stone-lined bathing pool, built in Victorian times, about 70 feet long and deep enough for swimming. Reddish cliffs rise at the west end of the beach, formed of Mercia mudstone, generally thin-layered, inclined, and crossed by veins and nodules; white bands of calcite and gypsum, or richly coloured modules of alabaster. A notice warns of the danger of falling rocks if getting too close to the cliffs. At low tide a 700 foot-wide band of marine terraces is exposed, initially composed of blue lias, further west replaced by the mudstone. Not far beyond West Street Beach is an area of photogenic upturned ridges, grey and red, containing many little rock pools, but otherwise most of the intertidal zone is rather featureless, generally mud or flat terraces. The cliffs though are much more interesting. 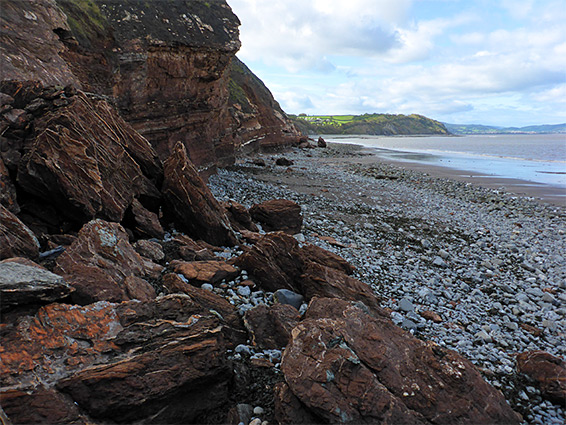 From Minehead, the red mudstone cliffs extend nearly half a mile then give way to greenish-grey strata of blue lias. At one point the vertical rocks are briefly replaced by bushy, unstable slopes - a landslip zone, below a high point, which is the a site of an ancient fort, Daws Castle, crossed by the coast path above. The cliffs dip down not far beyond allowing a connecting path to reach the beach, also linking with the Warren Bay Holiday Village; they soon rise again, becoming up to 200 feet high, now dark grey or nearly black, still with the orange and white veins. The strata are present in various angles, often horizontal, sometimes nearly vertical and at one location smoothly folded by 180 degrees; a protruding outcrop, just before another landslip area, a slope of loose earth with jumbled, multicoloured boulders below. To the west, the blue lias continues, forming cliffs that are extensively undercut in some places, and elsewhere containing a short cave, its rocks great/black with orange nodules. Nearby is an isolated tree trunk out on the beach, about 50 feet below the high watermark, and also some especially intricate rock surfaces, of both cliffs and detached boulders, formed of extremely thin layers crossed by delicate, criss-cross mineral veins. 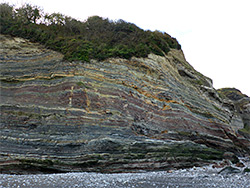 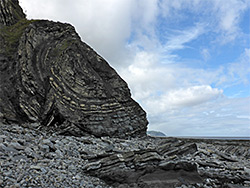 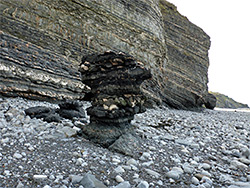 After rounding a minor headland, the rocks abruptly change from grey to red - this is the Blue Anchor Fault, where the younger Jurassic lias strata have slipped downwards, now positioned beside the older Triassic mudstone. The final section of the cliffs, from here to Blue Anchor, is all red, straight, low and relatively featureless, and still rather unstable as demonstrated at the far end, where an old pub, the Blue Anchor Inn, was several years ago forced to close due to subsidence, though may yet be saved if the council funds stabilisation work. The red rocks stop just beyond, replaced by gravels, clay and sand, which continue all the way to Minehead. 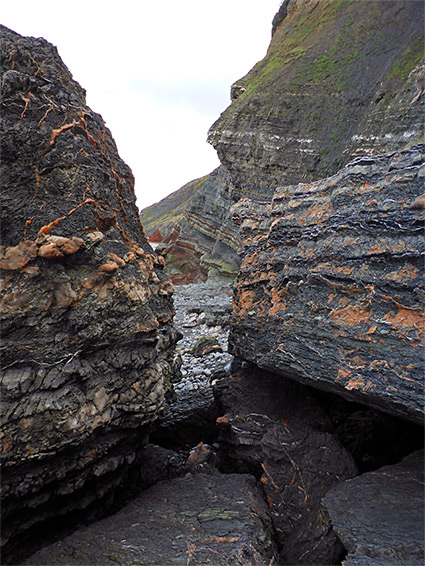 The road at Blue Anchor stays right beside the coast for 0.7 miles, above a sand/pebble beach up to half a mile wide when the tide is out. The coast path resumes where the road bends inland, beside a station along the West Somerset Steam Railway. It runs between beach and railway for a while until this too curves away from the coast, then continues alongside several fields and over a concrete-lined drainage channel to Dunster Beach, the next point accessed by a road. The beach has a mix of sand and pebbles crossed by many groynes and lined by a long row of chalets, some permanently owned, others available for rent. Just inland is a shallow, tree-lined lake, The Hawn, at the end of the River Avill, its exit controlled by sluice gates. The west end of the lake adjoins Minehead Golf course which extends for 1.1 miles all the way to the seafront at Minehead, where the mostly pebble beach is replaced by pure sand. For all this distance the path stays within a narrow band of undeveloped grassland between the beach and the golf course. 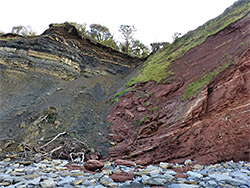 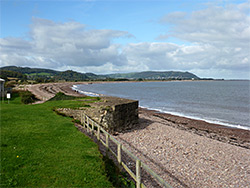 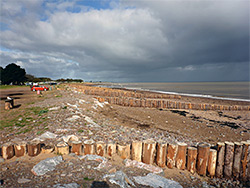 In spring 2020, the whole 1.9 mile section of the coast path between Blue Anchor and Watchet was closed due to a landslip, even though the affected area is just 100 feet or so in length, is only partially collapsed rather than completely, and is easily bypassed by walking through the woods just inland. The suggested diversion is 4 miles, and leads well away from the coast - beside the Pill River, though Old Cleeve and Lower Washford, then towards Watchet beside the Washford River. The coast road, the B3191, would be much shorter but is unsuitable for walking owing to lack of pavements or verges. The coast path, which is generally out-of-sight-of the sea begins in the west at the car park of Blue Anchor Inn, follows the edge of two fields, through a patch of trees, along four more fields and into more extensive woodland, which contains the landslip, in the vicinity of Warren Farm. Not far beyond the trail emerges from the trees again and reaches a junction with the short spur leading down to the beach; this passes three old limekilns, one partially enveloped with tree roots. Another path links with Warren Bay Holiday Village and the road. 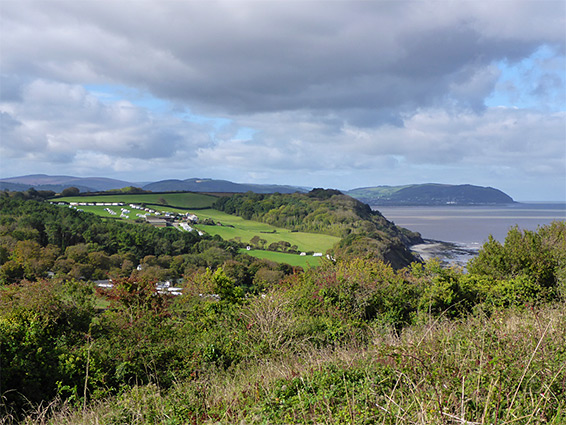 The coast path climbs a slope to the site of Daws Castle, a high point that affords the best elevated views of this part of the coast, then soon after meets the road once more; for the short distance from here to Watchet the road runs right along the rim of the cliffs, leaving no room for any path, and part has no pavements either, so pedestrians have to share the route with vehicles. Another old limekiln is found on east side of the castle site, which is a grassy meadow about 700 feet across, containing no visible structures or even earthworks. Some of the northern section has been lost to landslips. The fort was probably built by King Alfred in the 9th century, to help defend the coast against Viking attacks, and the site is now managed by English Heritage. 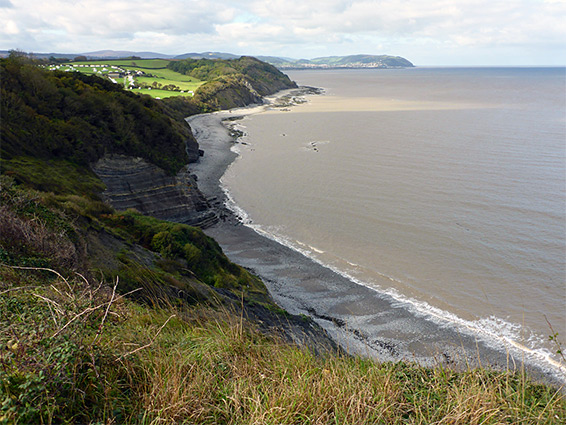