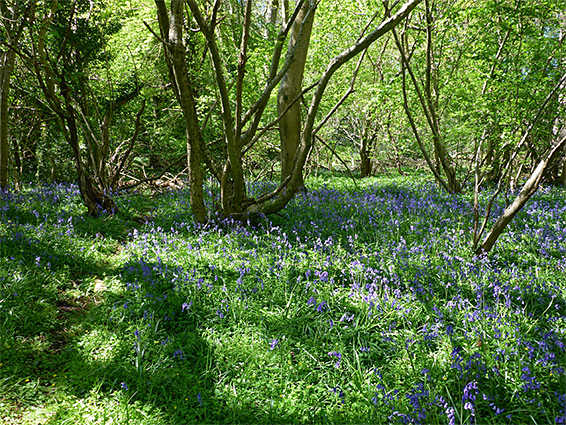 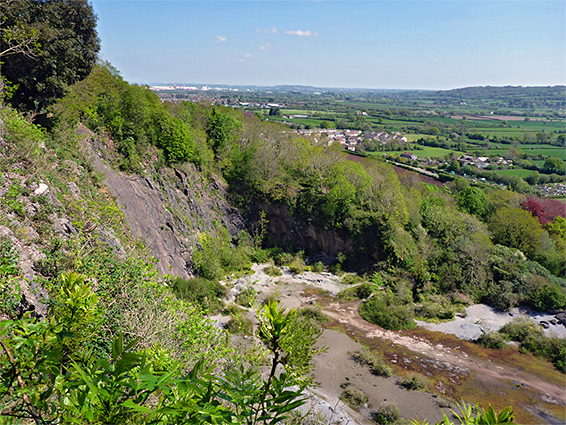 Ancient woodland on a ridge between Gordano Valley and the Bristol Channel; many bluebells in spring, and several rare plant species. Also contains a disused quarry

Weston Big Wood, a nature reserve and Site of Special Scientific Interest, covers the north end of the narrow ridge, up to 320 feet high, that separates Gordano Valley from the Bristol Channel, between Portishead and Clevedon, and is part of a continuous strip of mixed deciduous woodland, partly ancient, extending four miles to the southwest. Another part is protected as Walton Common Nature Reserve, also an Avon Wildlife Trust property.

The Big Wood extends over both sides of the ridge and across the flat land on top, from the edge of Portishead to the shallow Nightingale Valley, which separates it from the next section to the south, Seven Acre Wood, and the nature reserve is correspondingly large, 104 acres, crossed by several miles of footpaths.

The trees are a mix of pedunculate oak (the majority), hazel, ash, wych elm and wild cherry, with some rarer species like small-leaved lime, wild service tree, rock whitebeam and round-leaved whitebeam, and the understory vegetation is also diverse, due to varying levels of light and moisture across the differently orientated slopes, which face west, north and east. In common with most ancient woodland in the UK, the ground is most colourful in spring, when many areas are densely covered by bluebells, violets, wild garlic, wood anemone and lesser celandine, and, unlike some other similar reserves, there are also several uncommon wildflower species here, principally herb paris, bird's nest orchid, common toothwort and purple gromwell. The latter is the least common species, and in the wood is found only in two small colonies, one along the west edge right beside the road, the other on the rim of a disused quarry. The woodland is also a noted location for fungi, especially in the autumn, and for a good number of bird species. 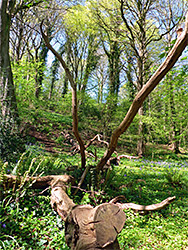 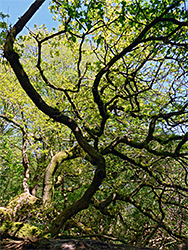 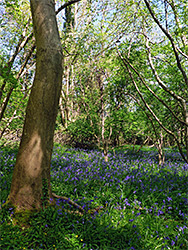 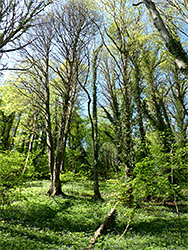 Vehicular access to Weston Big Wood is along Valley Road off the B3124, parking on a wide verge at the main entrance. Paths approach the woods from various other directions, along the edges of Portishead. The wood is bordered by fields in most places, exceptions being to the south where the trees are replaced by two old quarries, the smaller of which (Nightingale Quarry) is now used as a recycling centre, while the larger, Black Rock Quarry, is abandoned and partly overgrown, crossed by a path, and sometimes used for rockclimbing. The cliff face here is up to 100 feet tall, composed of the carboniferous limestone that makes up all of Gordano Ridge and other high ground nearby, extending towards the Mendip Hills. 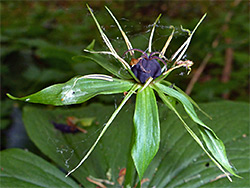 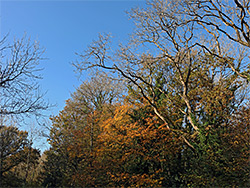 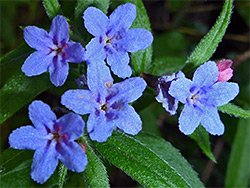 The trees are actually part of two separate areas - Weston Big Wood to the southwest and West Wood to the east, separated by an ancient parish boundary, which is marked by a line of eight stone posts, installed in the 1630s. The nature reserve encompasses both woods, and includes the cliff face in Black Rock Quarry. The ridge has a much longer history of use, as shown by some Iron Age earthworks and medieval boundary walls, and it is thought that at least some of the area has been continuously wooded for several thousand years, possibly since the last Ice Age, and latterly managed by coppicing. Limestone excavations have occurred since the 1700s, though both quarries have been closed for over a century. 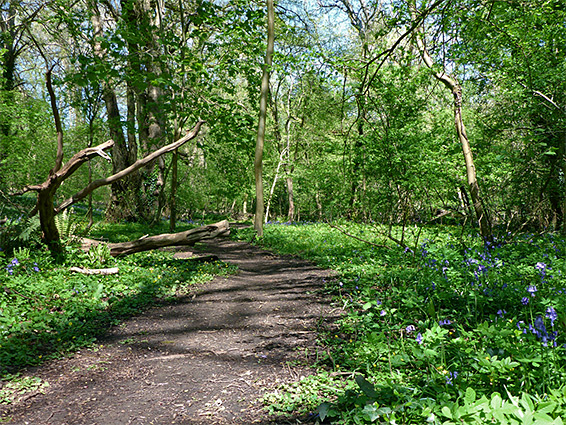 At the Valley Road entrance, the main path climbs a slope via wooden steps then divides, both branches crossing flat land on the ridgetop then rejoining after half a mile and linking with the other path from the entrance, which crosses the northern slopes. The southernmost of these paths crosses a large (recently created) clearing at one point, otherwise all the terrain is thickly wooded, with only occasional views of the valley below. Less-used trails explore the southern slopes, including the old quarry and it is along here, towards the north end of the reserve, in West Wood, that the best bluebell fields are located. Many other paths criss-cross all areas of the woodland, and it is quite easy to get lost.