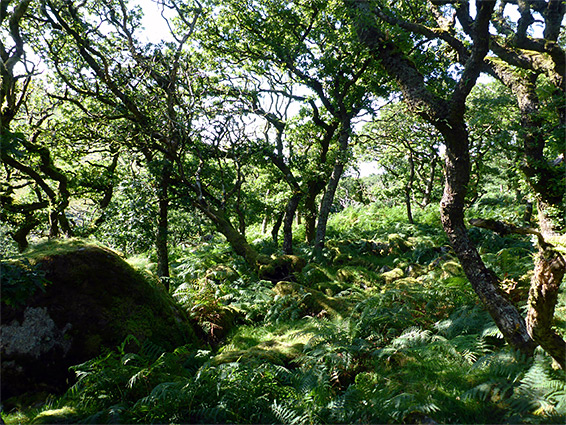 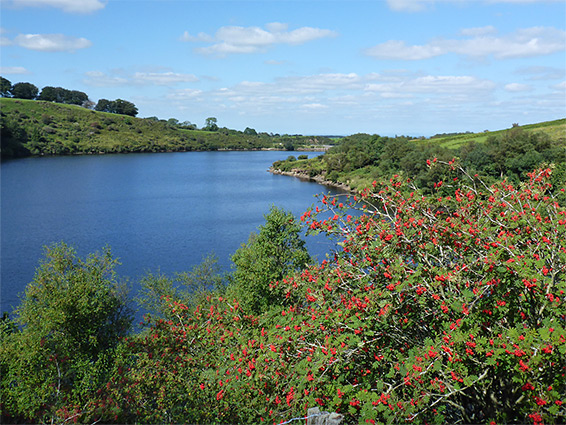 High elevation oak woodland in Dartmoor National Park, reached by a loop hike past a reservoir along the West Okement River, returning via a tor and open moorland

Along the north edge of Dartmoor National Park, near Okehampton, Blackator Copse (or Black-a-Tor) is a thin strip of high elevation oak woodland, where the trees adopt stunted, twisted forms and are liberally draped with mosses and lichens - one of (only) three such places on the moor, the others being Piles Copse to the south and Wistman's Wood, the most famous location.

The pedunculate oaks, and a few rowans, extend for nearly a mile along the valley of the West Okement River, elevation around 1,300 feet, and are currently 20 acres in area though were probably much more extensive, reduced in part due to past tree cutting and because of changes in climate. The wood is named after Black Tor, a granite summit above the river to the east, and may be visited on a 2.2 mile hike up the valley, the lower end of which is occupied by Meldon Reservoir, formed after construction of a dam in 1972.

The reservoir is quite scenic, though steep-sided and with very limited shoreline access. The walk can be extended, to a loop of 4.6 miles, by a short off-trail scramble from the copse to Black Tor, returning via a path over the surrounding moorland, where the views are very extensive, including higher peaks near the centre of the moor (mostly on land within the Okehampton firing range), and lowlands to the north, towards the Bristol Channel.

The copse is a National Nature Reserve, one of ten in Devon, recognised for the variety of the mosses and lichens, and for being one of the best examples in the country of high altitude oak woodland. The plants, including ferns, a few wildflower species and abundant fungi, grow on the ground, on the trees and on the many granite boulders ('clitter') that are scattered across this part of the valley floor. The wood is not managed in any active way, only by sporadic grazing of the ponies and sheep who inhabit the surrounding moorland. 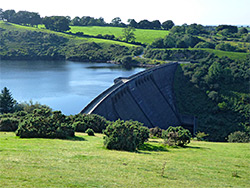 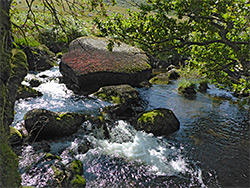 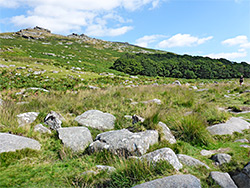 The walk starts from a large carpark near Meldon Reservoir, at the end of a short uphill road from the village of Meldon, just off the A30 and 3 miles from Okehampton. A small fee is charged. A track continues a short distance to and across the dam; an imposing concrete structure, the most recent of eight to be built on Dartmoor. The dam itself affords a fine view of the lake, which extends upstream for 0.7 miles, and in the other direction over an unspoiled section of the Okement valley, spanned high above by Meldon Viaduct, one of only two such iron-lattice bridges in the country, employing lattices for both piers and trusses. It was closed to passenger rail traffic in 1968 and now forms part of the Granite Way long-distance cycle route. 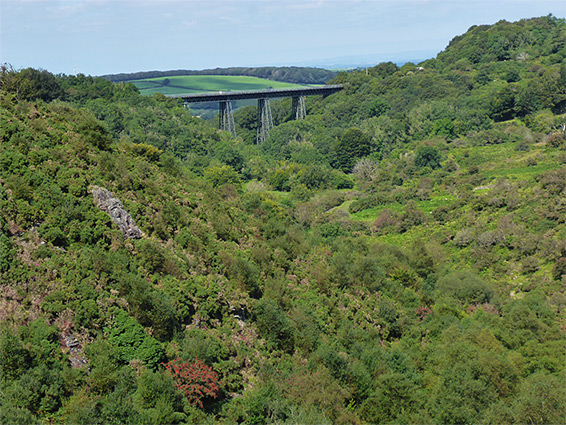 On the far side of the dam, one path heads north towards the viaduct, another descends to the river, while the main route, to the copse, runs southwestwards along the shoreline, above a line of trees. The only easily-accessible section of the lakeshore is reached after 900 feet, where a short path descends to a grassy bank and stony beach. Just beyond is a junction; one track, the return part of the loop, climbs a ridge (Longstone Hill) to the east, and the other continues along the shoreline, first bending away from the water to cross a short but steep-sided, wooded valley then proceeding further along the lake, past a small (artificially-created) island near the upper end, intended as a bird refuge, and down to flat, marshy ground beside the river. 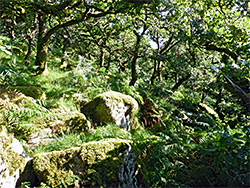 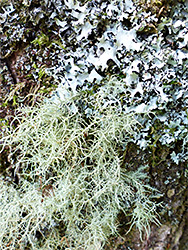 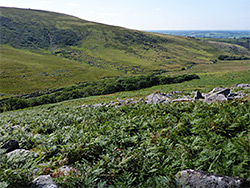 The path leads further up the valley, climbing a little to pass above a corridor of trees enclosing the river, and then, now rather narrower, crossing stony terrain for another third of a mile to an information sign at the entrance to Black-a-Tor Copse. The best, most dense area of trees is at the near edge; beyond, the wood becomes gradually more open, the oaks more scattered. The river flows close by, now just a small stream, its waters tumbling between many aged boulders. 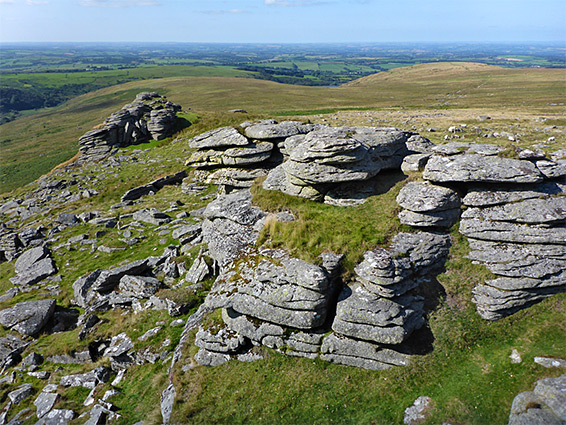 The view north, from Black Tor

Black Tor is less than a quarter of a mile from the copse and around 200 feet above, reached by an easy climb of the bracken-covered slopes. It consists of two main outcrops, the rocks showing the photogenic, layered, weathered forms typical of Dartmoor's granite summits. A faint path leads northwards from the tor, widening after a little way, traversing sometimes boggy moorland for just over a mile, coming close to the rim of another deep valley, of Red-a-ven Brook, then curving to the west and descending a steep slope to a junction beside the reservoir (close to the shoreline access point). From here, the parking area is 0.4 miles away. 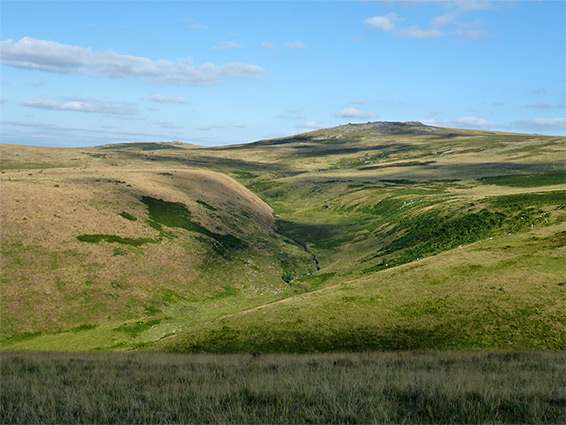