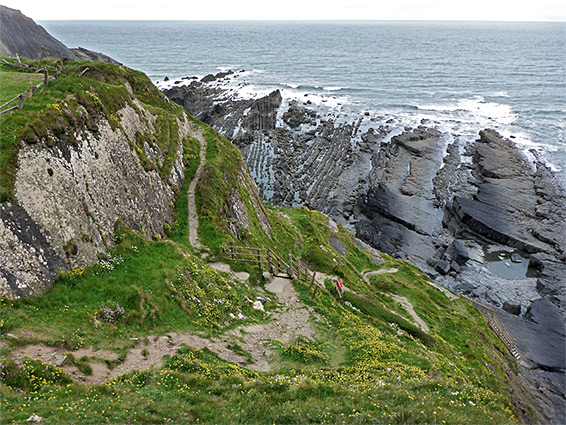 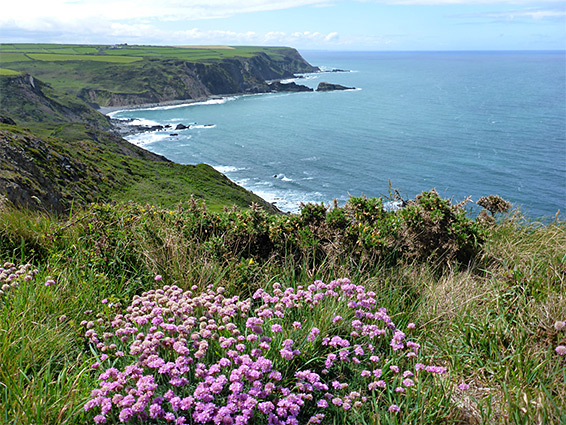 Spectacular, five mile section of the Hartland Peninsula; cliffs and steep slopes above rock, pebble and sand beaches, reachable in several places where streams flow to the sea, forming waterfalls

The five miles of the Devon coastline from Hartland Quay southwards to Marsland Mouth is a typically spectacular section of the Hartland Peninsula, the westernmost part of the North Devon Coast Area of Outstanding Natural Beauty; all is largely cliff-bound, a succession of fantastically eroded slopes, stacks and terraces of Carboniferous-era sandstone from the Crackington Formation, interrupted by beaches of sand or pebbles, often unreachable from the coast path above, this generally running between 200 and 400 feet above the sea, though dropping down in several places, with direct shoreline access in two more locations, in addition to the start and end points of the walk.

Both access locations are where streams flow to the beach; one is Speke's Mill Mouth, where the stream forms a dramatic waterfall above a narrow channel with more cascades, then continues through jumbled, upturned strata that include a huge natural arch, while the second is Welcome Mouth. Another stream flows to the coast a short distance south at Marsland Mouth, close to a road, while at the north end of this section, Hartland Quay also has vehicular access, the road winding down slopes to a parking place beside a small group of buildings.

A walk along the coast path from Hartland Quay to Marsland Mouth, round-trip just over 11 miles, may take only half a day though a whole day would be needed if exploring at the three main beach access points, and/or climbing down to some of the few other places were the coastal rocks or beaches are reachable. 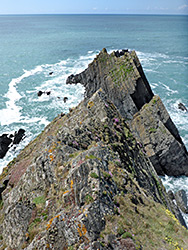 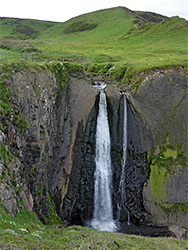 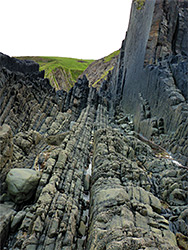 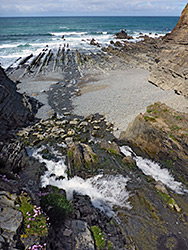 Three miles west of Hartland village, Hartland Quay was once a harbour, established in medieval times and operational until 1887 when a great storm completely destroyed the harbour's pier and most other structures. The road to the quay ends in a (free) parking area beside a row of cottages once used by the harbourmaster and others. More parking place is available on a grassy area on the slopes above. Masonry remnants from the former harbour are still visible, along rock faces just to the north. The history of the quay is depicted in a small museum in the 'Wrecker's Retreat', a pub, open year round.

The southwards coastal path begins at the edge of the Hartland Quay car park, climbing a grassy slope and running above a small pebble/rock beach with no easy access, then crossing a rocky headland, Screda Point, formed of strata angled at 45 degrees, festooned with wildflowers including sea thrift and kidney vetch. On the far side is a similarly-sized beach (Screda Cove), also mainly pebbles above the high water mark, rock terraces below, as the path continues, below a hill for a while before veering away from the coast briefly to avoid another peak, St Catherine's Tor, the inland side of which is smooth and grass-covered while the west side is angular and rocky, gradually being eroded by the sea. A stream flows down the shallow valley below the hill, tumbling over a ledge cliff, forming a waterfall, and onto the rocks of Childspit Beach, 800 feet wide at low tide; mainly flattish terraces but dotted with bigger stacks and other formations. 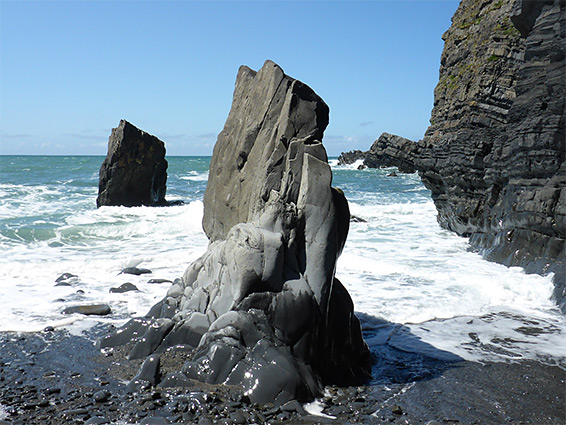 After St Catherine's Tor, the path ascends a slope and returns to the cliff edge, past a colony of spring squill, an attractive blue wildflower. It follows the cliffs for a quarter of a mile above Speke's Mill Beach, also similar in appearance, with pebbles high up and extensive terraces and rock pools below the high water level. Another stream descends the cliffs on the south side of the beach, falling over a big ledge to create the 50 foot Speke's Mill Falls and flowing through a brief, narrow ravine over pools and other cascades, and finally onto the beach, in an area of bigger, more dramatic formations. The headland just south, Brownspear Point, creates a divide between this and the next beach, and a ridge extends seaward from the point, containing a very impressive arch with a jagged opening some 20 feet high, reachable around low tide. The beach is accessed by a steep side path ending with a flight of steps, to Speke's Mill Mouth, and while Brownspear Bay to the south can be accessed at low tide, Speke's Mill Mouth marks the temporary end to the easy sea level access, and for the next 3.5 miles the coast path stays far from the water, traversing above a succession of coves, at the foot of high cliffs. South of Brownspear Beach are Longpeak Beach, Gunpath Beach, Mansley Beach, the larger Elmscott Beach, Sandhole Beach, Osland Beach and Nabor Beach, all separated by low, rocky ridges, followed by the bigger promontory of Nabor Point, site of a communications tower. 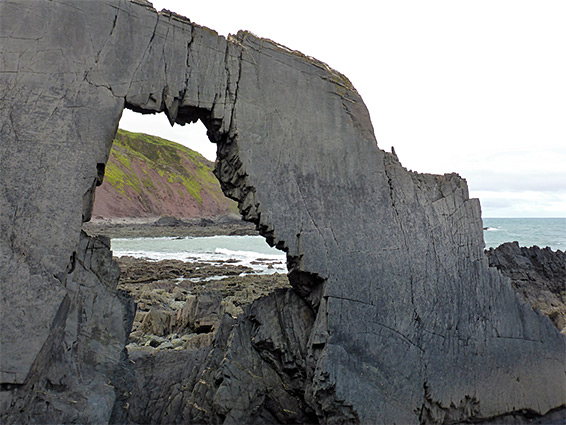 The walking route stays on a path until Elmscott Beach then moves inland and follows a road for nearly a mile, until Nabor Point, where a path resumes, above more ridges and coves including Embury Beach and Newthorpe Beach, past 515 foot Embury Beacon and 458 foot Knap Head, before a steep descent takes it near to sea level at Welcome Mouth, another location where a stream flows to the sea and forms a waterfall. This place is reached by a road and can be quite busy, in contrast to the largely deserted coastline to the north. The beach has a familiar mix of pebbles and photogenic formations plus sand, both above the high tide mark, and a bigger band revealed only around low tide. From Welcome Mouth it is a short walk up and down a ridge to Marsland Mouth, and another stream with cascade, at the north end of the next major sand and pebble bay, Marsland Beach. This beach is reachable via a short path inland, leading to a narrow lane with no public parking, originating from the little settlement of Marsland. 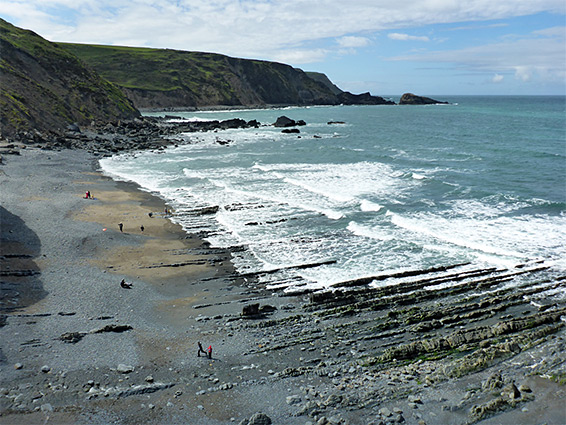