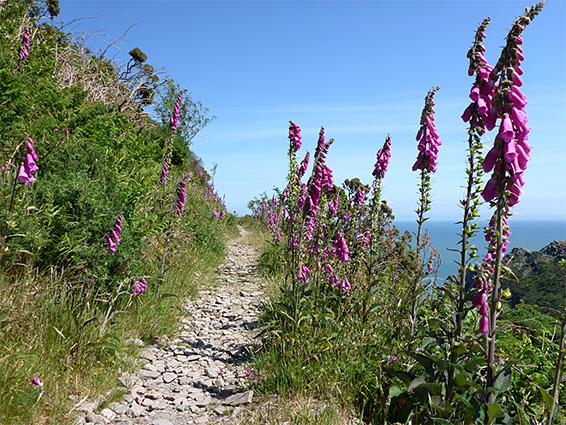 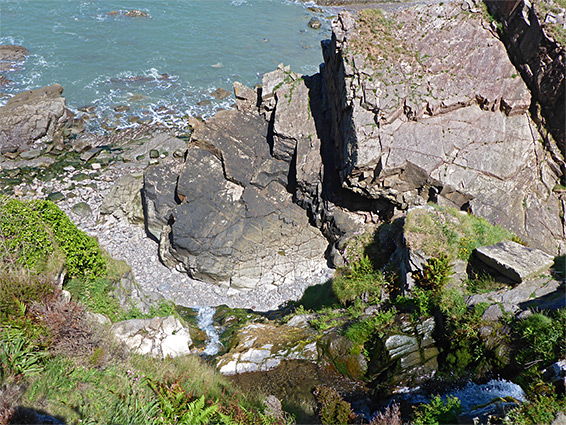 Four mile section of the north Devon coast, between two deep valleys, inaccessible at sea level but followed by the coast path up to 900 feet above. A waterfall at the lower end of Sherrycombe can be accessed by off-trail hiking

Management
National Trust
Location
North of Churchtown, 2 miles from the A39; EX31 4PY
Walk
4.8 miles, to the bridge across the stream in Sherrycombe
Photo Tour (25 images)

The tallest and steepest section of the north Devon coastline is the ten miles between Lynmouth and Combe Martin, where the land rises over a thousand feet less than half a mile inland, and the water's edge is accessible in only a very few places, where streams meet the sea; the coast path stays high above the shore, out-of-sight of the many cliffs, coves and sea stacks below, and even at low tide there are many locations where cliffs plunge vertically down into deep water.

The path is still very scenic, with long distance views up and down the coast, mostly unobscured by trees, and one such section is the 4.2 miles from the picturesque valley of the River Heddon to Sherrycombe, the next significant drainage to the west. The walk starts 0.6 miles along the path to Heddon's Mouth, the secluded beach at the lower end of the valley, and ends after the descent into Sherrycombe, though can easily be extended another 3 miles to Combe Martin, including the climb to Great Hangman, the north face of which is the highest cliff in England, a sheer rock wall 800 feet high.

There is no path down Sherrycombe but the tree-lined stream flowing through the valley can be followed to the brink of a 30 foot waterfall where it tumbles down a sandstone cliff to a rock and pebble beach. The falls are not climbable but the views from the top are spectacular enough and the walk down the valley is interesting, if rather difficult due to dense undergrowth in some places. 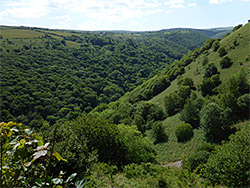 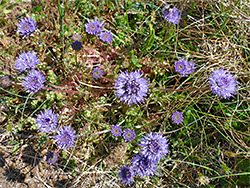 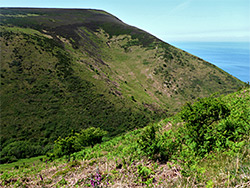 Heddon Valley, a National trust property, is reached by a 2 mile drive along narrow lanes starting from the A39 near Churchtown. Vehicles are parked in a sizeable area shielded by trees, opposite the Trust visitor centre and cafe, and just up the road from a historic hotel, the Hunter's Inn, from where begins the one mile path to Heddon's Mouth, on the east side of the valley. The westbound coast path, to Sherrycombe and then Combe Martin, branches off a parallel track on the west side of the valley, and this starts at thousand feet west of the inn, along the road, just after it crosses a tributary stream. This route is level, following the stream into the main valley, then running between the lower edge of the wooded slopes and a broad meadow beside the River Heddon. The coast path soon forks off to the northwest, climbing steadily through mature woodland and zig-zagging more steeply up the fern-filled corridor of a minor ravine, to a saddle, before levelling out and contouring northwards, at about 550 feet elevation. The rocky slopes are sun-baked in summer, when many wildflowers grow, most numerous the foxgloves that line the path as it continues northwards to a promontory above Heddon's Mouth before bending abruptly to the west. 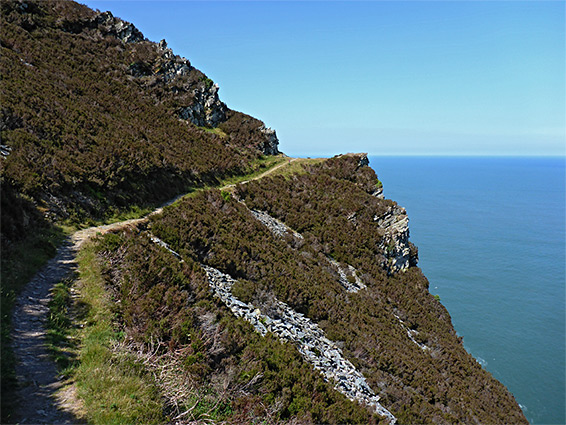 Path to the horizon

East Cleve to Holdstone Down

The trail rises further across the north side of a minor summit, past a series of rock outcrops - the most photogenic section of the route, eventually rounding another corner and heading inland, reaching a junction in front of a wall that marks the boundary between farmland and the steep slopes above the sea. The next 1.3 miles is all along the edges of fields, running above the cliffs of East Cleeve, around the upper end of a steep ravine (Bosley Gut), past the shorter cliffs of North Cleeve and out into extensive moorland centred on two rounded summits, 1,061 foot Trentishoe Down and 1,146 foot Holdstone Down. The path widens to a track, rising gradually to a high point at 900 feet, north of Holdstone Hill, then gradually descending towards Sherrycombe. A little way back, on Trentishoe Down, are two short connecting paths to parking places along the road across the downs, from Heddon Valley. 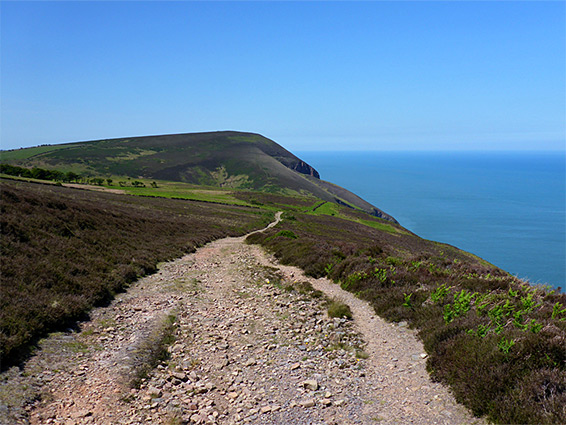 As it approaches Sherrycombe, the coast path is forced to make a major diversion to the south, heading inland for nearly half a mile until the valley is much shallower, and dropping down 200 feet to the stream, crossing on a wooden bridge and starting a similar climb on the far side, towards Great Hangman. One way to explore the valley is to walk northwards alongside the stream all the way to the waterfall, following a faint, unofficial path in some places, while another is to leave the coast path before it turns south and head directly down the steep slopes, joining the stream towards its lower end. Although much shorter this is more difficult, crossing generally overgrown terrain with patches of loose scree, descending 500 feet over a short distance. The stream is followed most of the way by an ancient wall that provides an alternative walking route in some places, down through the twisted trees bordering the creek and eventually emerging to a short grassy corridor preceding the unclimbable waterfall at the edge of the cliffs, tantalisingly out of reach of the sand and rock beach beneath, over 300 feet wide at low tide. 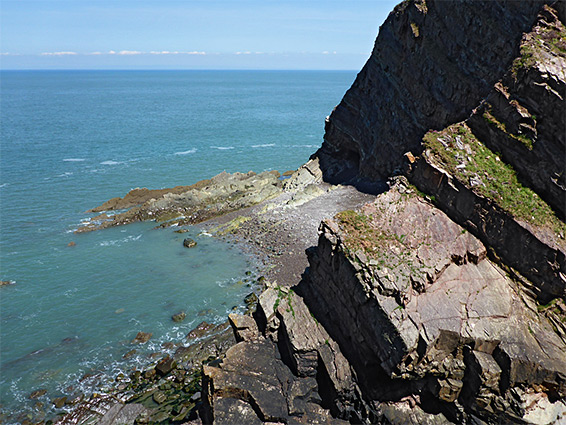